We waste a lot of time in playing games, watching movies, listening to Spotify as well. So it becomes important to track usage of various apps in our Windows PC.

We will learn how to write a python script which can track the amount of time you spent on various desktop apps like VSCode, Spotify, File explorer etc. For running this script, you require Python version 3.6 or below. This script won’t work in Python 3.7 as the libraries we will use are not currently supported in Python 3.7.

Now run this script. You will see the app time getting printed every second on console. As you will switch between different applications, the time spent on them will keep getting printed on the console. 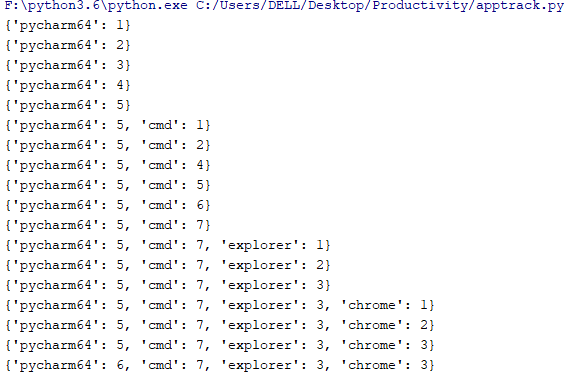 How this code works?
First of all, we maintain two dictionaries: timestamp and process_time. In the timestamp dictionary, we store the latest Unix timestamp at which a particular application is found in active/ foreground window. The application name and latest timestamp are stored as key value pairs inside this dictionary.

In process_time dictionary, we store the total time an application has spent in active/ foreground window. This is the time which we want to track through this script.

We also use time.sleep() inside the code so that the while loop repeats only after a certain interval.

That’s it! If you want, you can further tinker with this script by creating a frontend around it, adding database support for permanently storing data and so on. Hope you liked the article. Comment in case of any doubts. Also check out other articles on my blog as well!

Tarun Khare
Software developer, avid learner, writes at: www.codeharvest.io
Should developers study 20 hours a week after work?
#career
The perfect open-sourcer does not exist
#opensource #beginners #github #productivity
What was your win this week?
#discuss #weeklyretro

Once suspended, tkkhhaarree will not be able to comment or publish posts until their suspension is removed.

Once unsuspended, tkkhhaarree will be able to comment and publish posts again.

Once unpublished, all posts by tkkhhaarree will become hidden and only accessible to themselves.

If tkkhhaarree is not suspended, they can still re-publish their posts from their dashboard.

Once unpublished, this post will become invisible to the public and only accessible to Tarun Khare.

Thanks for keeping DEV Community 👩‍💻👨‍💻 safe. Here is what you can do to flag tkkhhaarree:

Unflagging tkkhhaarree will restore default visibility to their posts.