We recently performed several optimizations within the request/response path for the new JavaScript platform, Osgood, in an attempt to make it run faster. Osgood is a secure, fast, and simple platform for running JavaScript HTTP servers, and is distributed as a binary that can run on your server just like Node.js.

Some of these improvements were rather straightforward and are applicable to most codebases:

Other optimizations depended on how V8 optimizes and runs JavaScript and wouldn't necessarily be faster in other situations:

Many of these optimizations are ones you wouldn't necessarily want to make within app code. However, with Osgood being a large-audience platform for running application code, it makes sense to optimize as much as possible and benefit a large number of applications. 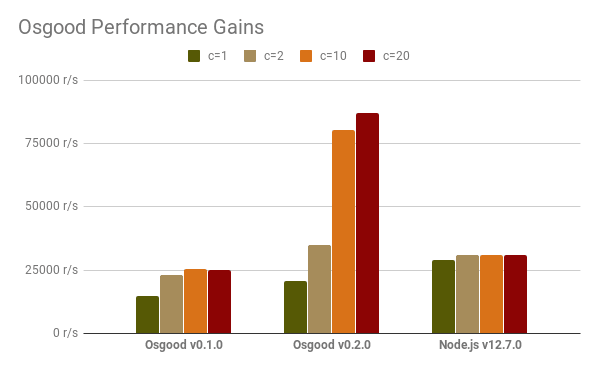 As you can see, Osgood runs much faster as the concurrency increases. We built Osgood from the beginning with concurrency in mind so these results aren't that surprising. Under the hood, Osgood is making use of Tokio. From the Tokio homepage:

Applications built with Tokio are concurrent out of the box. Tokio provides a multithreaded, work-stealing, task scheduler tuned for async networking work loads.

Here are some raw numbers from these benchmarks which also show how response time standard deviation is an order of magnitude calmer as well:

The code used for these benchmarks is available here.

We're pretty happy with the performance gains we've been able to make. That said we have more plans to make it even faster. One such feature we're planning on implementing is to optionally auto-scale workers (a feature which gave a 2.5x improvement over the osgood@v0.1.0 release).

While the average latency of osgood@0.2.1 is less than half of Node.js, the max is still higher. This means there should still be some room to optimize garbage collection and get more consistent results.

As always, patches are welcome, and if you see an area to help performance we'd love to get a PR from you!

Wanna get your hands on this faster version of Osgood? Visit the releases page and download the latest version!

I came here to kick ass, build web applications, and chew bubblegum. And I'm all out of gum.