This year I studied computer's organisation II in College. I've been fascinated thus far with how computation is done on an assembler language and I want to share with you a little of my knowledge.

Maybe this will become a series because I'm finding myself really captivated with this subject and I think a lot of people will understand better how programming works with this info.

ASM, short for Assembler (or assembly), is not a unique language such as C, Java, Go or whatever, it is instead a program that converts code into machine language. This means there's assembler languages for the different types of machines. For example: There is assembler for the Intel and AMD processor' architectures (x86_64) and there's another for ARM architectures.

This tutorial is going to be oriented toward Intel's Architecture

🔧 What are we going to use? 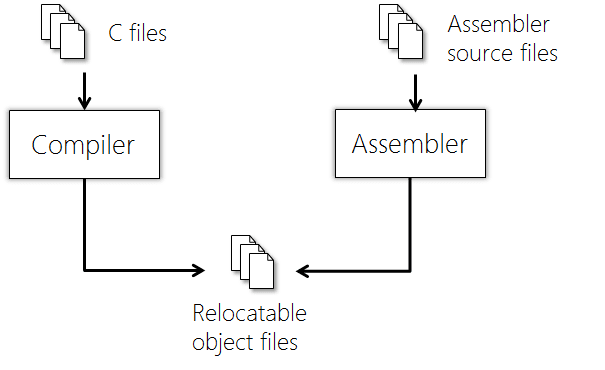 For this short program we are going to use NASM and whatever text editor you like. In my case, I'm going to use VS Code since it has some nice plugins.

I'm only going to show this example in a linux system since the sys calls are different for mac, hence the example won't work in that system (believe me, this post was intended for mac as well...)

🏗️ Structure of an ASM program

Ok, now we have our assembler and our Text Editor or IDE. What now?

Let's create a new file and name it helloWorld.asm 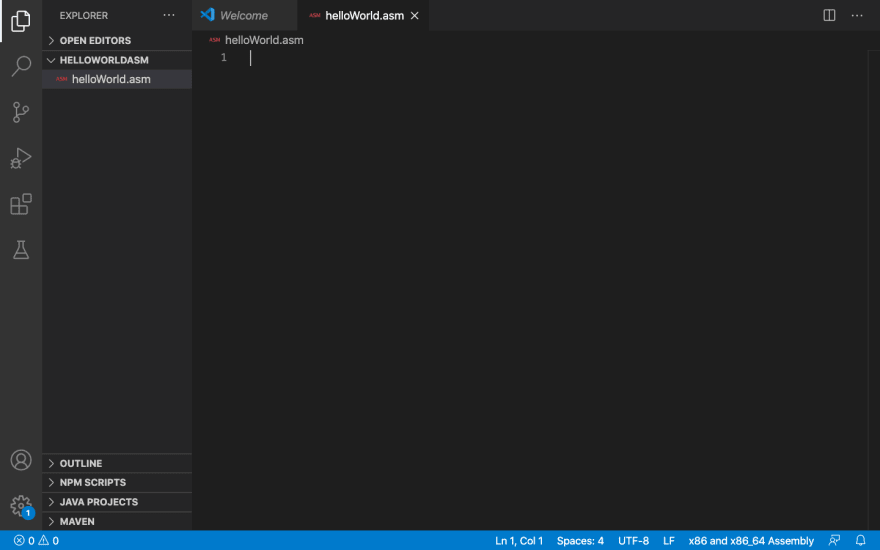 Now that we have our empty file. We need to determine how the file is going to be used. In ASM each file has 4 sections. This sections will always exist even if you don't define them. However, if you need one, you will have to do it.

Ok, so what we are trying to build here is a CLI program that prints Hello World!. Sounds fairly easy. But in order to do so, we need to inform the processor that this function that we are going to name 'start' is global to all the system. so we add our .text section with the 'start' function and the global statement outside the section. Like this: 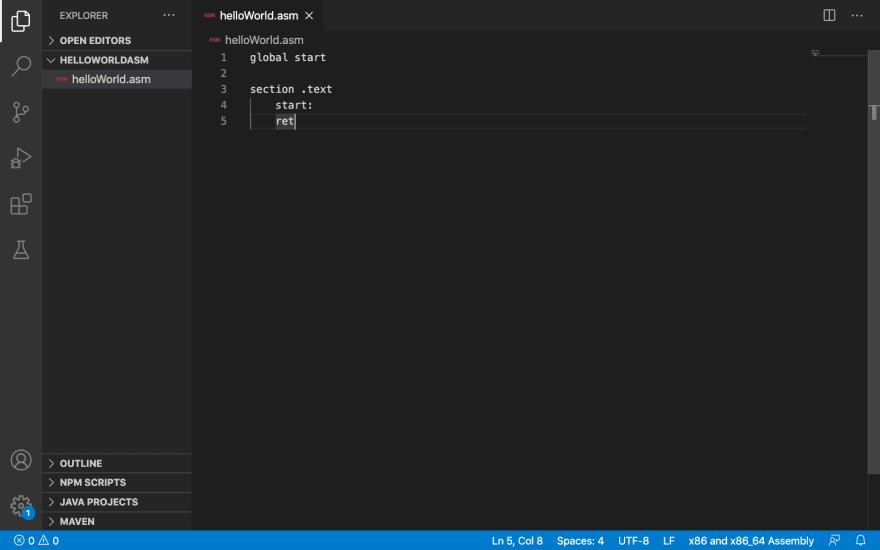 Since we don't want to use any fancy C functions, nor none of those other high level languages functions for the matter, we are going to rely on Syscalls.

Without digging that deep, Syscalls are just calls to the OS. We need to call the 0x80 interruption (on UNIX systems) and pass to that interruption the parameters we want it to handle.

For the function that we are going to use (sys_write) the interruption receives 4 parameters:

RAX, RBX, RCX and RDX are just multi-purpose registers that we are going to use and that I'm going to explain in further chapters of this series. So bare with me for now.

So let's define the message first and let's call int 0x80 after that. 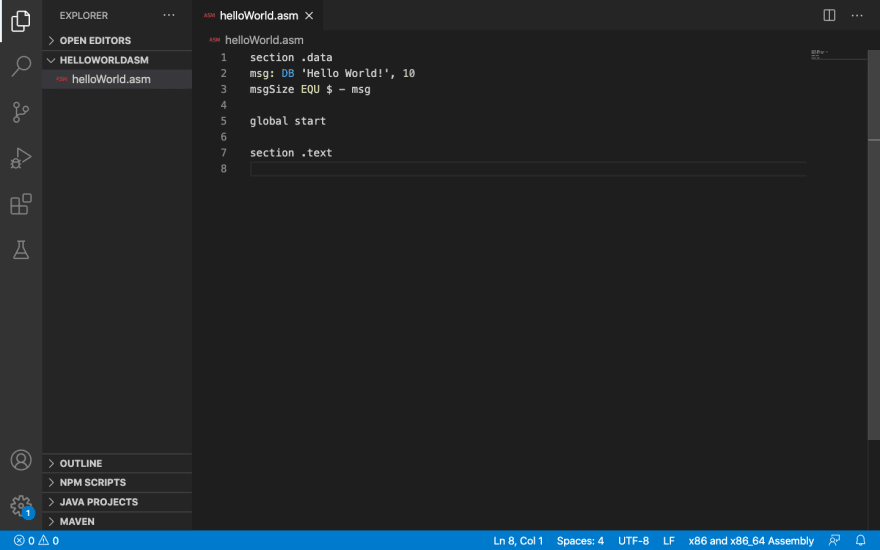 This is the section were we are going to define our 'Hello World!' string variable. Since it will be already initialised, we declare in .data

This is our new string. It's declared under the name msg and we initialise it with DB (define byte) the characters that will be displayed and a ', 10' which is going to be our \n character. What I want you to get out of this step is that Each char comprising 'Hello World!' takes one byte of memory. So by using DB we are asking the processor for a memory slot that will take 13 bytes (counting the space and \n char).

This one is a little bit tougher. We are declaring a variable call msgSize that is going to step on the right end of Hello World! ($) and will subtract the address were your msg variable began. Thus leaving us with the bytes used for msg

We have our message, let's display it now! 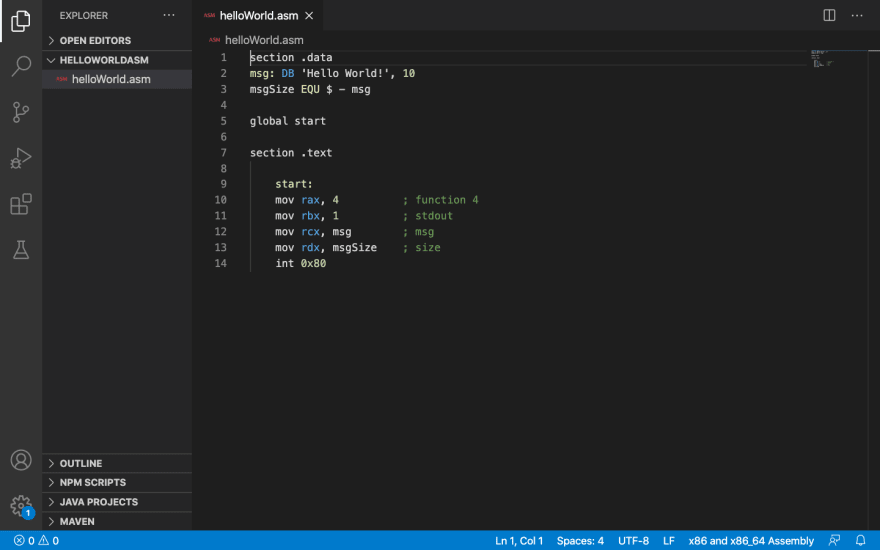 Intel has a very weird way of doing things most of the time. So each line of text will be divided into 4 fragments again

So what we are doing in here is moving the number 4 to our RAX register (because sys_write is our function number 4 on UNIX). We move the number 1 to RBX (representing STDOUT). Then the memory in which msg is defined will be stored on RCX and finally the size on RCX. By calling int 0x80 we are asking the interruption 0x80 to handle all the parameters we threw to it and do what it's supposed to do. 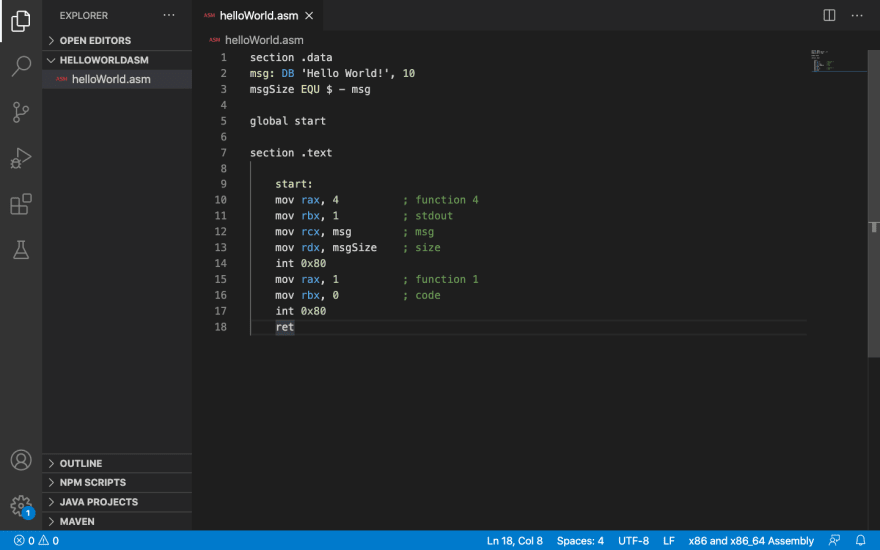 Our final step is to exit the program. And guess what? that requires another Syscall. In this case, our function will be number 1 (exit) and our parameter will be 0 (because that's the number we want to return. 0 usually means that the program was executed successfully while 1 means that it wasn't)

Let's save our file as helloWorld.asm and head over to the terminal.

If you have already installed NASM, head to the folder where you saved your .asm file and assemble and link it.

And that's it for today. You should get a 'Hello World message on your terminal.

If you want to see the full code, here is the Repository: Hello World!

Once suspended, tomassirio will not be able to comment or publish posts until their suspension is removed.

Once unsuspended, tomassirio will be able to comment and publish posts again.

Once unpublished, all posts by tomassirio will become hidden and only accessible to themselves.

If tomassirio is not suspended, they can still re-publish their posts from their dashboard.

Once unpublished, this post will become invisible to the public and only accessible to Tomas Sirio.

Thanks for keeping DEV Community 👩‍💻👨‍💻 safe. Here is what you can do to flag tomassirio:

Unflagging tomassirio will restore default visibility to their posts.