In this tutorial, we will build a small context-aware bot which will serve as a virtual assistant for booking cars, hotels and dinner tables. We will be using https://wonop.com to do so. Through these tutorials, you will be introduced to the different concepts of Rocklang one by one. By the end of the tutorial, you will be able to build your own context-aware bots. Here is what the end result will look like: 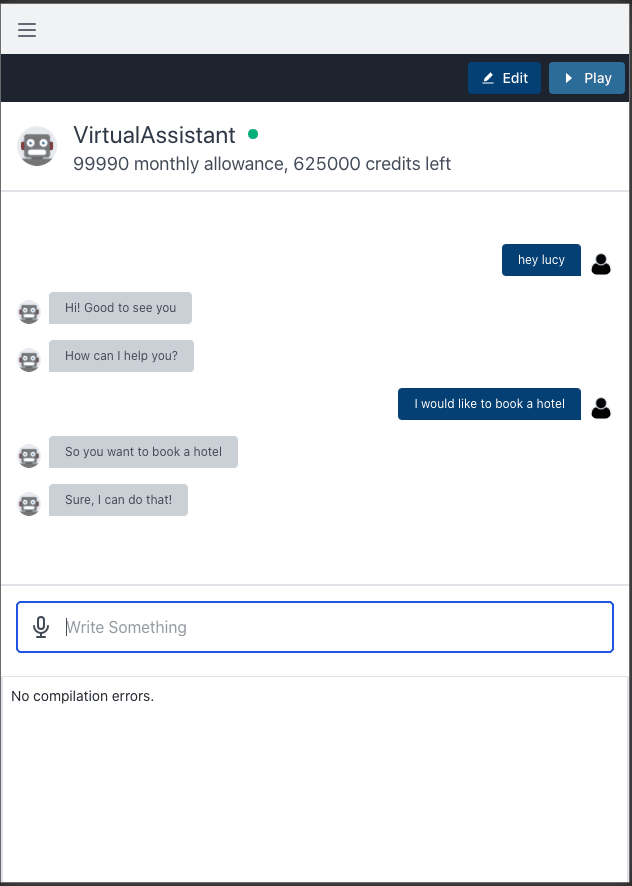 To get familiar with rocklang we create a traditional Hello world example. Navigate to the Agents in the GUI and, if you have not already, create a new agent. Once created, you will see the code editor. Enter the following snippet:

The main function is the one which is invoked when you run the program. This simple script demonstrates two ways of creating output using Rocklang. The first function say is used to get the agent to respond to the phrase. The second function printLn prints a statement to the console at the bottom of your screen.

The previous script replies You said: ... and does not differentiate between different intents. The first thing for us to do is to try to understand the users intent. To this end, we will make use of Rocklang context, pattern and route concepts.

We will start off by a simple bot that responds to the phrase "hello world" and for any other phrase says "I do not understand what you are saying.".

A lot of things are going on in the above example. If we start with the main function: Here we first get the user context. If no user context exists yet, we default to "Lobby". This means that "Lobby" will be the first context within which we will try to match the user's request. Next, we ask the system to route the phrase within the context. In our case, the context only contains one pattern, namely "hello" "world" which means that matches will only be found for "hello world" and anything else will fail at being routed. If routing fails, the agent informs that the query is not understood.

If you are familiar with Regex, you will note that context patterns have taken inspiration from this concept. We illustrate this by making a small adjustment to our previous agent:

This relatively small change to the program has a huge impact: The agent will now respond to phrases like "Hello world", "hey planet" and "cheers earth". Note how little we had to do to cover this wide range of possibilities.

As we are creating a Lobby we would typically expect a greeting either followed by a name or nothing. We would like to extract the name from the phrase to check if the user got the name right or not. To do this, we update the pattern to:

And then we create the logic to deal with the hello request:

The logic is relatively straight forward: Either the user used a name or not. If a name was used we check that it is the correct name. If not, we inform the user that the name was wrong and otherwise we greet back.

As you try to match more advanced scenarios, the patterns you will use become longer and more involved. To keep things simple and testable, you can break patterns down into subpatterns. As we are building a virtual assistant for bookings, we need to be able to match the many different ways a user may formulate this request. We do this by breaking the sentence to parts. We first define the introductory part of the sentence, then the part with the active verb and finally, any modifications to the sentence:

Next, we craft the logic to handle requests made with this pattern.

Most of the above logic is similar to the logic we did for the greeting section. However, we do use two new functions hasContext and pushContext. The function hasContext checks whether the developer has created a context with a specific name and returns a boolean to reflect that. The function pushContext pushes the user into a new context with new patterns. If this happens are patterns in the Lobby are put aside to the benefit of the patterns in the new context.

The final step in this tutorial is to create dummy contexts for cars and hotels. To do this, we add a simple context with one route: The main pattern matches any phrase and invokes the route function:

Inside the route function, we call popContext to return back to the Lobby context. Finally, we can now extend this by adding similar contexts for the hotel:

In just about 140 lines of code (including comments), we have made a context-aware agent that has the capability of understanding what you want to do and navigate to that context. Of course, there is more work to be done in order for this to become fully functional and we will cover this in the upcoming tutorials.

I would love to hear some feedback on this language I've developed! Finally, you can join our community:

Once suspended, troelsfr will not be able to comment or publish posts until their suspension is removed.

Once unsuspended, troelsfr will be able to comment and publish posts again.

Once unpublished, all posts by troelsfr will become hidden and only accessible to themselves.

If troelsfr is not suspended, they can still re-publish their posts from their dashboard.

Once unpublished, this post will become invisible to the public and only accessible to Troels F. Rønnow.