The original article is here

Today, let’s discuss resiliency in microservices architecture. In general, services could communicate with each other via a synchronous or asynchronous way. We assume that dividing a big monolithic system into smaller chunks will help to decouple service’s responsibility. In reality, it may be harder to manage inter-service communication. There are two well-known concepts you may hear about it: circuit breaker and retry.

Imagine a simple scenario where requests from users call service A and subsequently call another service. We could call B as a dependent service of A or downstream service. A request coming to service B will go through a load balancer before propagating to different instances.

System fault in backend services could happen due to many reasons. For example, slow database, network blip or memory contention. In this scenario, if a response to service A is either timeout or server error, it may make our user try again. What we could do to protect downstream services in chaos situations.

Circuit breaker provides more control over failure rate and resources. The design of circuit breaker handles the error quickly and gracefully without waiting for TCP connection timeout. This fail-fast mechanism will protect downstream layer. The most important part of this mechanism is that we’re immediately returning some response to the calling service. No thread pools filling up with pending requests, no timeouts, and hopefully fewer annoyed end-consumers. Also, it gives enough time for downstream service to recover. It is hard to prevent fault completely, but it is possible to reduce the damage of failures.

By using hystrix circuit breaker, we could add a fall back behaviour in upstream service. For example, service B could access a replica service or cache instead of calling service C. Introducing this fallback approach requires integrating testing as we may not encounter this network pattern in a happy path. 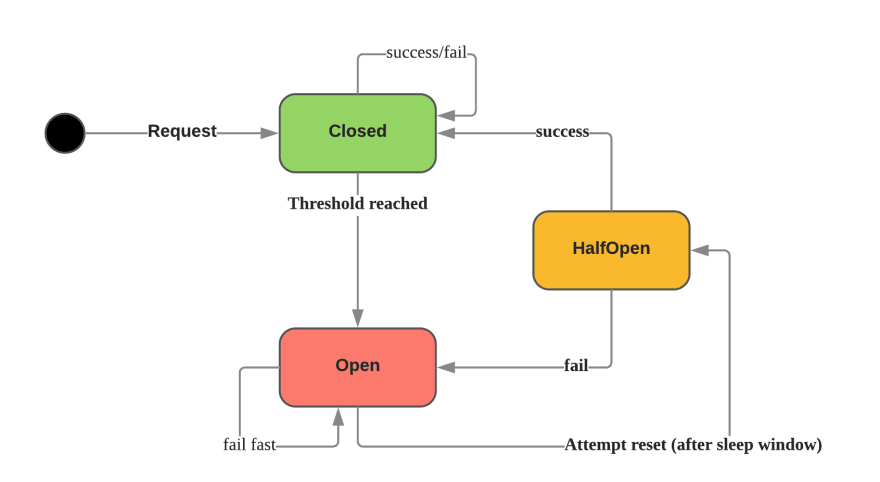 There are 3 main states in circuit breaker:

Threshold's value could be derived from SLA agreement between 2 services. These values should be fine tune while testing on staging by putting other dependencies into context
A good circuit breaker name should pinpoint the right service connection has trouble. In reality, you may have many API endpoints to connect with one service. It is reasonable to attach each endpoint with a separate circuit breaker.

A circuit breaker is usually placed in integration points. Even circuit breaker provides a fail-fast mechanism, we still need to verify the alternative fallback is working. It is a waste of effort if we don't ever test the fallback solution as we may assume it is a rare case. In the simplest dry run, we also need to make sure the threshold is valid too. In my personal experience, printing out the config of parameters in the log will help to debug easier.

This sample code use hystrix-go library, which is an implementation of hystrix Netflix library in Golang.

To run the demo, you can see 2 experiments with the circuit closed and open:

From the circuit breaker model above, what will happen when service B downsize its number of instances. Many existing requests from A probably get 5xx errors. It could cause a false alarm to open the circuit breaker. That is why we need retry to avoid intermittent network hiccups.
A simple code for retry can be like this:

To achieve optimistic concurrency control, we could orchestrate different services to retry at different times. Retrying immediately may not be used as it creates a burst number of requests upon dependent services. Adding a backoff time will help to ease this stressful situation. Some other patterns randomize backoff time (or jitter in waiting period).
Let's consider those following algorithms:

Combination of both tools

Circuit breaker is commonly used in stateless online transaction systems, especially at the integration points. Retry should use for scheduling jobs or workers which are not constraint by timeout. We can use both at the same time with careful consideration. In a large system, service mesh will be an ideal architecture to better orchestrate different configurations at scale.

Build a GraphQL Api in Go with gqlgen and Gorm

Once suspended, trongdan_tran will not be able to comment or publish posts until their suspension is removed.

Once unsuspended, trongdan_tran will be able to comment and publish posts again.

Once unpublished, all posts by trongdan_tran will become hidden and only accessible to themselves.

If trongdan_tran is not suspended, they can still re-publish their posts from their dashboard.

Once unpublished, this post will become invisible to the public and only accessible to Dan Tran.

Thanks for keeping DEV Community 👩‍💻👨‍💻 safe. Here is what you can do to flag trongdan_tran:

Unflagging trongdan_tran will restore default visibility to their posts.