Ever since .NET Core was released I've always wanted to do something with Docker. In my daily work I haven't had the chance yet, since the Kentico CMS we work with relies on .NET Framework and there are no major benefits of running that in Docker.

Docker is a platform for developing, deploying and running applications. Docker seperates your application from it's underlying infrastructure so you don't have to configure the hosting environment. That's a huge plus for me, since most developers don't really like to do that anyway. It relies on virtualization technology like Hyper-V, but has many optimizations which make it faster and better than most virtualization technologies out there. 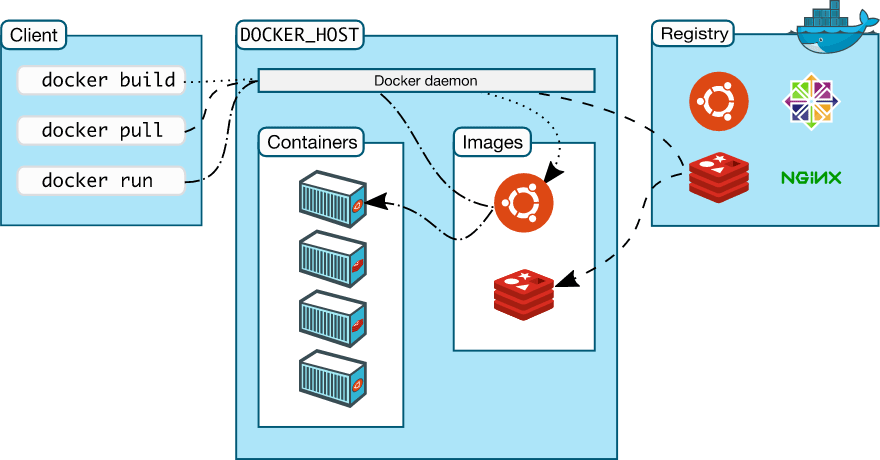 An image is basically an instruction on how to create a container. Most of the times, you will use another image to build your own image. A good example of this is the .NET Core SDK. When creating a Docker image of your .NET Core application, you will reference the SDK image in order to build your application. This way you can even add a SQL Server to your image.

A container is an instance of the image that can be run on a Docker host. Containers are isolated from the host system; by default they have their own network and can't be reached externally. They also have their own file storage.

After an image is created it needs to be pushed to a registry. The registry can be a public registry, like Dockerhub, or a private registry from your company.

The Docker host can pull images from a registry and runs it in a Docker container. A Docker host can be either Windows or Linux, which allows you to run a .NET Core application on Linux.

We're hosting the major part of our websites in Azure App Services, mostly in the Premium V2 tier. When we compare the prices a of Windows and Linux App Service the differences are huge. A P2V2 App Service costs around €246 a month for Windows and €142 a month for Linux; that's a 57% decrease 😱. See the App Service pricing for all prices.

Apart from the reduce in costs, which is of course great for your customers, there's another benefit of Linux applications. Developers like me love it when their application is fast and try to constantly improve the performance. What if I told you that Linux gives you a huge performance boost? Roberto Prevato wrote a post about Linux vs Windows performance in Azure App Services. The results? Linux could handle about twice the amount of requests per second than Windows with about half the response time. I knew Linux was faster than Windows, but this fast? Wow! 🚀

Alright. We've covered the basics of the Docker architecture, but how does all of this tie together? Let's find out.

That's it! It sounds complicated since there are so many parts involved, but luckily Visual Studio makes it very easy to do on your local machine. 😎

Let's get to work 🔨 and get Kentixo Xperience 13 running in Docker!

I'm assuming you have Visual Studio 2019 and SQL Server installed on your machine. So go ahead and do that if you haven't! 🔗

First we need to download a trial for Kentico 13 Xperience and install it. Make sure to choose .NET Core as development model and install the Dancing Goat 🐐 sample site on step three.

So we have everything installed now! Open the Visual Studio solution for the .NET Core site (DancingGoatCore.sln) and run it. If all goes well, you should see the Dancing🕺 Goat sample site: 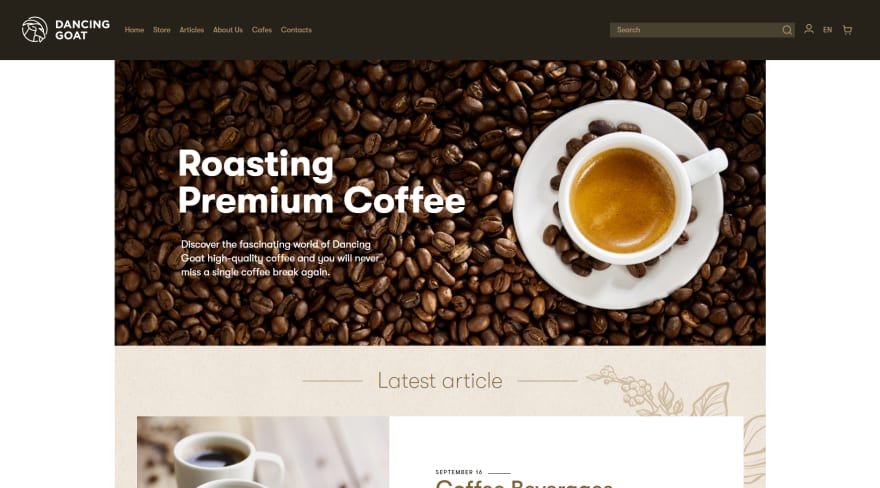 Now that we have the Dancing Goat website running, we can install Docker Desktop. This is used as a local image registry and host we can run Docker containers on.

Okay, we've got Docker running. The next step will be to create a Docker image for the application. Images can be assembled using a Dockerfile, which is a set of commands that Docker uses to build the image.

Luckily, the folks at Microsoft made it very easy for us to create a Docker image from within Visual Studio 🙌. 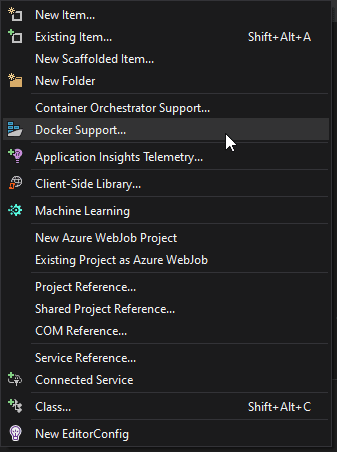 Choose Windows as operating system (OS) and press OK. A Dockerfile will now be created in the root of the project. This Dockerfile consists of four steps:

Sets the runtime for the Docker container. In this case, the .NET Core runtime. It pulls a Docker image from Microsoft to do this. By default, the network of a Docker container is not externally accessible. Since this is a web application, port 80 is exposed and made accessible.

Builds the application using the .NET Core SDK image. It uses the usual dotnet build command to do this.

Creates an entrypoint for the image, so Docker knows how to run it.

Now it's time to build and run the image in a container 🤩! Docker is a command-line tool, so normally we'd have to invoke two commands: one to build and publish the image, and one to run an image. Visual Studio conveniently helps us with that and added a launch configuration: 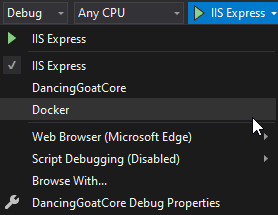 Select it and run the application! 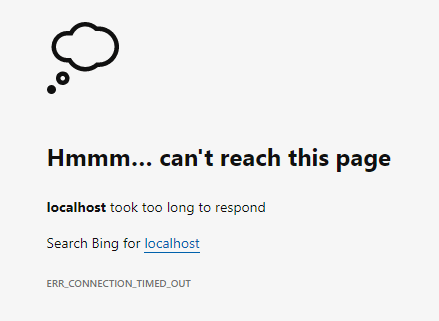 Uh-oh... a time-out 😅 and even an exception in Visual Studio:

Remember when I explained earlier that a Docker container is isolated from the host, even it's network? We did expose port 80 in the Dockerfile for the web server. But.. the container can't reach the SQL Server that is running on your local machine, which causes the exception.

In order to do that, we need to expose the right port on the container which is used by SQL Server, which is 1433. Go back to the Dockerfile and add this line below the EXPOSE 80 like:

Save the Dockerfile and run the application again. It should work this time, won't it? 🤔

Nope, again a time-out... When I've tried running Kentico Xperience in Docker for the first time, I've really struggled with this and didn't know what caused it. The ports on the Docker image are fine, SQL Server is running, what's wrong?

Turns out that SQL Server blocks all incoming external traffic from port 1433 by default. Time to fix that!

First, make sure to modify the CMSConnectionString in the appsettings.json file, so the Data source is the local IP adress of your machine, with an explicit port after it:

Finally, we need to tweak some SQL Server settings. Press CTRL+R and execute compmgmt.msc. In the menu on the left, go to this particular entry: 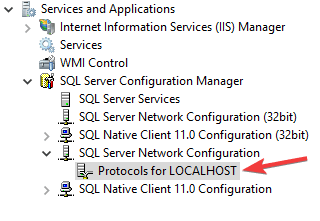 Right-click on TCP/IP in the middle and set Enabled to Yes. In the same window, select the IP Addresses tab and look for the IPAll group and set the TCP port to 1433: 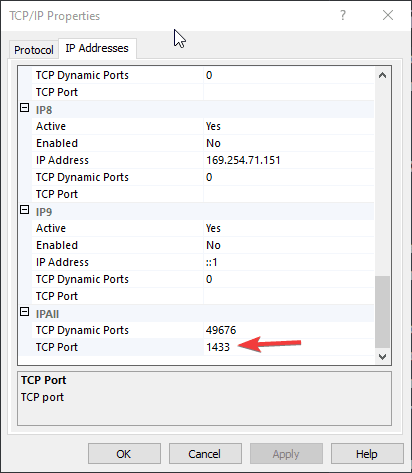 Press OK and give your machine a quick reboot 🔌.

After your machine has been rebooted, launch the application again and after a short wait you should be greeted with the Dancing Goat website once again 💪🏼

Ever had the problem that a new team-member couldn't get your application running, even if he followed a setup guide? With Docker, a big part of this setup is taken care of by the image. From the used .NET Core SDK, to exposed ports, filesystem configuration and environment variables. All he has to do is install Docker Desktop, check-out the Git repository containing the application and the Docker file and build it. Oh, and maybe configure some SQL Server settings. 😇 But really, that's it! No more struggles with things like .NET Core versions, IIS settings or filesystem permissions 👍

💡 Top 3 reasons to use Docker (with Kentico Xperience)

Using Docker has many advantages over traditional development, but these are the reasons that have the biggest impact on your team or customer:

Thank you for your attention and have fun experimenting with Docker! 📦

How to use the keycloak latest tag instead of the legancy tag, in you docker-compose.

Once suspended, truelime will not be able to comment or publish posts until their suspension is removed.

Once unsuspended, truelime will be able to comment and publish posts again.

Once unpublished, all posts by truelime will become hidden and only accessible to themselves.

If truelime is not suspended, they can still re-publish their posts from their dashboard.

Once unpublished, this post will become invisible to the public and only accessible to Sietse Trommelen.

Thanks for keeping DEV Community 👩‍💻👨‍💻 safe. Here is what you can do to flag truelime:

Unflagging truelime will restore default visibility to their posts.