Almost every Kafka Consumer tutorial structure their code like this:

Basically we set up our Kafka Consumer, subscribe it to some Kafka topics and then go into an infinite loop where, on each iteration, we poll some messages from these topics and process them one by one. We can call this the poll-then-process loop.

This is fairly simple, easy to put into practice, and people may have been using it in production without any issue. However, there are various problems with this model, which we're going into more details in the next section.

The problems with the poll-then-process loop

Looking at the code above, we developers might think that poll acts as a way to signal demand to Kafka. Our consumer only polls to pull in more messages when it has finished working on previous ones. If its processing rate is slow, Kafka would act as the shock absorber, ensuring we don't lose any message even when the producing rate is much higher.

On the other hand, when processing rate is slow, the interval between consecutive polls also increases. This is problematic since there is a default (5 minutes) upper bound on it with the max.poll.interval.ms configuration:

The maximum delay between invocations of poll() when using consumer group management. This places an upper bound on the amount of time that the consumer can be idle before fetching more records. If poll() is not called before expiration of this timeout, then the consumer is considered failed and the group will rebalance in order to reassign the partitions to another member.

In other words, if our consumer doesn't call poll at least once every max.poll.interval.ms, to Kafka, it's as good as dead. When this happens, Kafka follows up with a rebalance process to distribute the current work of the dead consumer to the rest of its consumer group. This introduces more overhead and delay into an already slow processing rate.

Worse yet, if the processing causes slowness in one consumer, chances are, it would cause the same problem for other consumers taking over its work. Moreover, the presumed dead consumer can also cause rebalance when it attempts to rejoin the group on its next poll (remember it's an infinite loop!). Both of these makes rebalance happen again and again, slowing consumption even more.

Now, there is another configuration which can help with this situation:

The maximum number of records returned in a single call to poll(). Note, that max.poll.records does not impact the underlying fetching behavior. The consumer will cache the records from each fetch request and returns them incrementally from each poll.

With this set to a lower value, our consumer will process fewer messages per poll. Thus, the poll interval will decrease. Alternatively, we can also increase max.poll.interval.ms to a bigger value. This should solve the problem temporarily if we can't move away from the poll-then-process loop. Nevertheless, it is not ideal.

Firstly, these configurations are set when we start our consumers, but whether they work or not depends on the messages or the applications. We may set them specifically for each application, but in the end, we're playing a guessing game and pray that we're lucky.

Secondly, in the worst case, it may take twice the max.poll.interval.ms duration for the rebalance process to start:

We never want rebalance to take even more time, so setting a higher max.poll.interval.ms is not great.

Finally, these configurations implies that our consumer is "expected" to poll frequently, at least once every max.poll.interval.ms, no matter what kind of processing it is doing. By not incorporating this expectation, the poll-then-process loop is not only misleading to developers but also doomed to fail.

Kafka only guarantees the order of messages within one partition. Messages from different partitions are unrelated and can be processed in parallel. That's why in Kafka, the number of partition in a topic is the unit of parallelism.

In theory, we could easily achieve maximum parallelism by having as many consumers running as the number of partitions on a topic. However, in reality, this is too much overhead, not to mention its impact on increasing the chance for rebalance, since there are more consumers that can come and go.

If we look at our consumer code again, it can subscribe to multiple topics and possibly receive messages from multiple partitions. Yet, when it comes to processing these messages, it does so one by one. This is not optimal.

Now, assuming our processing logic is very simple, could we just use a thread pool to parallelize it? For example, by submitting one processing task to the thread pool, for each message?

Well, kind of. It only works if we don't care about processing ordering and guarantees like at-most-once, at-least-once, etc. So it is not very useful in practice.

The many setbacks of the poll-then-process loop come from the fact that different concerns - polling, processing, offsets committing - are mixed together. As a result, when we divide them into separated components, we end up with an improved model which supports parallel processing and back-pressure properly. Each component is described in more details below. 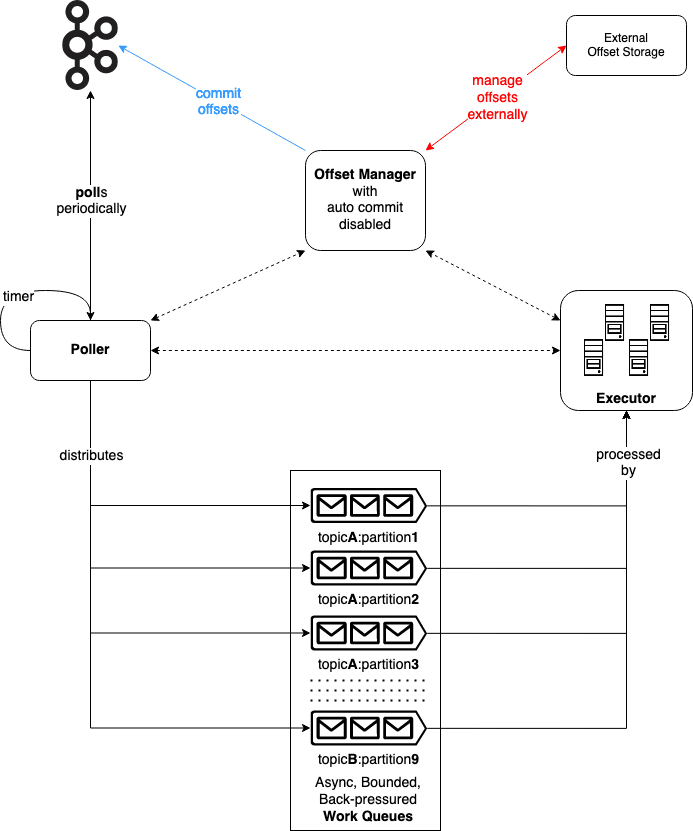 The Work Queues is the communication channel between Poller and Executor:

In short, Poller encapsulates everything related to poll in Kafka:

Suspend fetching from the requested partitions. Future calls to poll(Duration) will not return any records from these partitions until they have been resumed using resume(Collection).

Executor acts like a thread pool, where it maintains multiple workers to process the messages:

Each message in Kafka is associated with an offset - an integer number denoting its position in the current partition. By storing this number, we essentially provide a checkpoint for our consumer. If it fails and comes back, it knows from where to continue. As such, it is vital for implementing various processing guarantees in Kafka:

With that in mind, we have Offset Manager providing a consistent interface for other components to work with these saved offsets:

What about Kafka's auto commit? Confluent claims that:

Using auto-commit gives you “at least once” delivery: Kafka guarantees that no messages will be missed, but duplicates are possible.

This is true for delivery, however, it doesn't provide any guarantee for processing:

Due to this, we always set enable.auto.commit to false and have Offset Manager manage offsets manually.

Let's go through a few example use cases to see how the components work together to satisfy different processing guarantees. 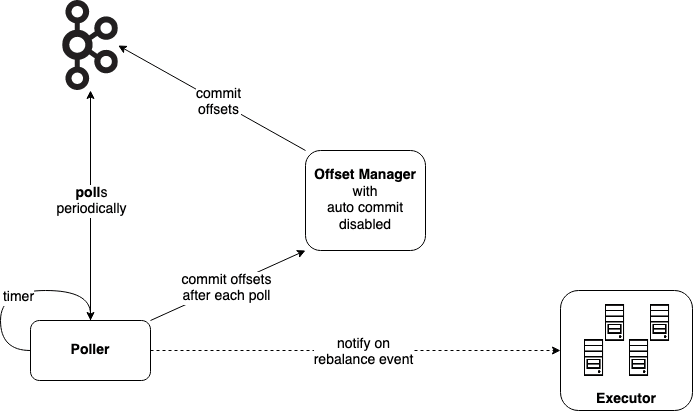 For at-most-once, we just need to commit offsets before processing the messages. We can do it right before processing each message. However, it doesn't give us a stronger guarantee while introducing more costs. Therefore, Poller is responsible for it. After each poll, it will tell Offset Manager to save these offsets and wait for a success acknowledgement from Kafka before queuing the messages for processing.

Prior to a rebalance event, it just needs to send a fire-and-forget signal to Executor to stop processing. It then takes down the work queues and gets back to wait for rebalance. The lost messages are those still sitting in the queues or in the middle of processing. If we want to optimize for fewer lost without affecting the duration of rebalance, we can use a smaller queue size. 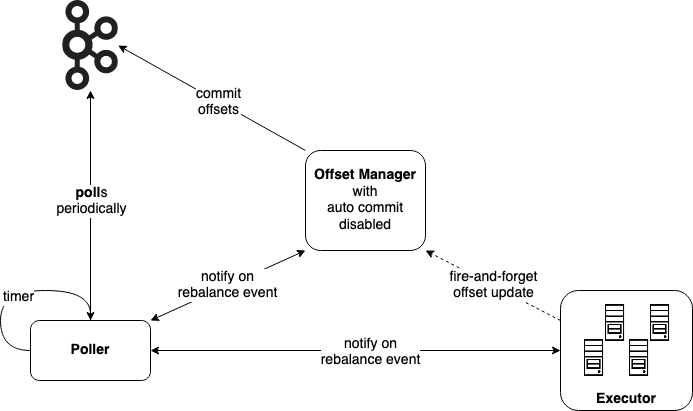 For at-least-once, we just need to make sure offsets are only saved after the messages have been processed successfully. Consequently, if we were to process 10 messages, we wouldn't need to save offsets for all of them but only the last one.

In this setup, Executor will emit signals to Offset Manager each time it completes processing for a message. Offset Manager keeps track of the latest offset for each partition - which in total is not that many - and decide when to commit them to Kafka. For example, we can set Offset Manager to commit once every 5 seconds. This happens regardless of whether new messages are coming or not. (Interestingly, this is important for older Kafka if we don't want to lose committed offsets in a low activity Kafka topic, see KAFKA-4682).

Prior to a rebalance event, Poller set a hard deadline and notifies Executor to wrap up its in-flight processing and Offset Manager to follow up with a last commit. If the deadline has passed, or Poller has received responses from others, it takes down the work queues and gets back to wait for rebalance.

To optimize for fewer duplicated processing, we can: 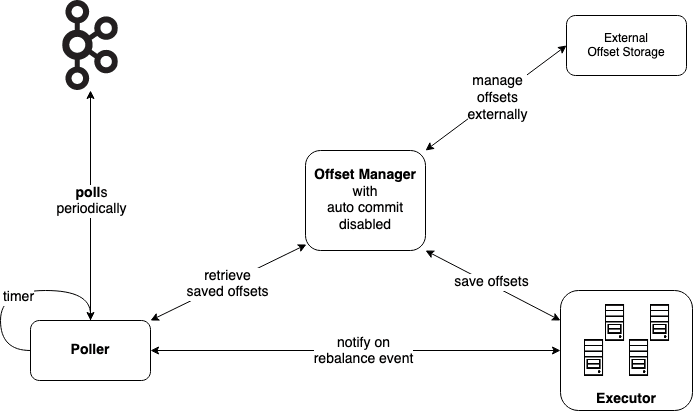 In this case, offset saving and message processing needs to happen within one transaction. This means Executor and Offset Manager working closely together using synchronous calls to make it happen.

Following a rebalance event, Poller asks Offset Manager for the saved offsets of current assignments. It then seeks to restore the saved positions before resuming to poll.

Overrides the fetch offsets that the consumer will use on the next poll(timeout).

Prior to a rebalance event, Poller notifies Executor and waits for its response. Executor rolls back its in-flight transactions and return to Poller. Poller then takes down the work queues and gets back to wait for rebalance.

We analyze the various issues with the loop-then-process loop and come up with a more proper model for understanding and implementing Kafka Consumer. The downside is that it is much more complicated, and probably not easy for beginners. We blame this complexity on Kafka and its low level API.

In practice, we probably won't do it ourselves but use a ready-made library that may or may not base on similar models: Alpakka Kafka, Spring for Kafka, zio-kafka, etc... Even then, the proposed model can be useful for evaluating these solutions or implementing new ones.

Once suspended, tuleism will not be able to comment or publish posts until their suspension is removed.

Once unsuspended, tuleism will be able to comment and publish posts again.

Once unpublished, all posts by tuleism will become hidden and only accessible to themselves.

If tuleism is not suspended, they can still re-publish their posts from their dashboard.

Once unpublished, this post will become invisible to the public and only accessible to Linh Nguyen.

Thanks for keeping DEV Community 👩‍💻👨‍💻 safe. Here is what you can do to flag tuleism:

Unflagging tuleism will restore default visibility to their posts.