Hello everyone, today I bring you some F# 5.0 preview niceties FSharp Conf was last Friday (June 5th, 2020) and there were many many awesome #fsharp talks 100% recommended, if you are into web development there are a couple of talks for you:

That being said... today's content post is little different I'll talk about the nuget package references for F# scripts (fsx files), you can read more about the new F# 5.0 features here.

F# 5.0 is introducing the nuget references now if you want to reference a library it's pretty simple for example

that will download the Nuwtonsoft.Json package (in a transparent way for the user) and add the referenced library, after that you will be able to open any namespaces that the library provides.

I feel that gives you a better experience when you want to create some scripts either for quick usage, prototyping or even API exploration as we will see.

Recently Microsoft released a new nuget package: Microsoft.Windows.Sdk.NET which exposes in a pretty nice way the native WinRT API's from Windows. The same API's you would use from UWP Apps the most modern stuff is in there

C#/WinRT provides Windows Runtime (WinRT) projection support for the C# language. A "projection" is an adapter that enables programming the WinRT APIs in a natural and familiar way for the target language. The C#/WinRT projection hides the details of interop between C# and WinRT interfaces, and provides mappings of many WinRT types to appropriate .NET equivalents, such as strings, URIs, common value types, and generic collections.

WinRT APIs are defined in *.winmd format, and C#/WinRT includes tooling that generates C# code for consumption scenarios, or generates a *.winmd for authoring scenarios. Generated C# source code can be compiled into interop assemblies, similar to how C++/WinRT generates headers for the C++ language projection. This means that neither the C# compiler nor the .NET Runtime require built-in knowledge of WinRT any longer.

.NET Core is the focus for the .NET platform. It is an open-source, cross-platform runtime…

I've done some WinRT stuff in the past with UWP applications and I have always felt that the WinRT API is just so nice to work with and remembering that everything you do with it is 100% native.

What can you do with the WinRT projection?

Anything that does not require some sort of UI, if you want to use an API that requires a CoreWindow or that it executes on the UI thread then you would need to implement some interfaces for your application as noted here everything else that is UI-less is good to go, and as an example: In this repository I made a small Avalonia App that leverages the WinRT API. It includes examples for the following API's

And... after half day reading... Finally some code.

The first Example is a small gist that uses the
Windows.Storage API to take 5 files from the the user's music library and check the its music properties. 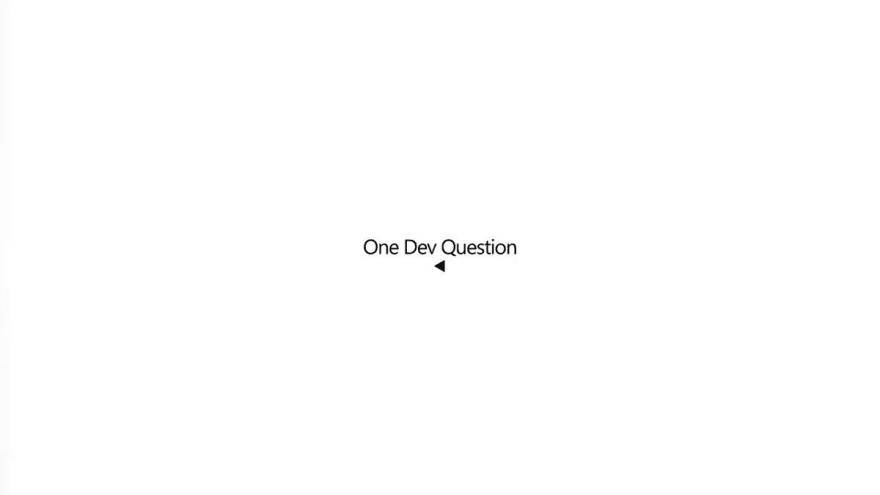 ICYMI - Here's the first video we did with Larry @Osterman, when he explained why so many Windows Runtime APIs were async.

Fortunately the System namespace includes a nice extension method that converts an IAsyncAction to a usual Task, then we use some F# Async functions to make it work seamlessly in F#.

In this one, we just iterate over the files to read properties on each of them you can read more about the StorageFile type here

And that's it. The WinRT API is at your fingertips reach now available with F#!

What about a terminal music player prototype?
As noted here... 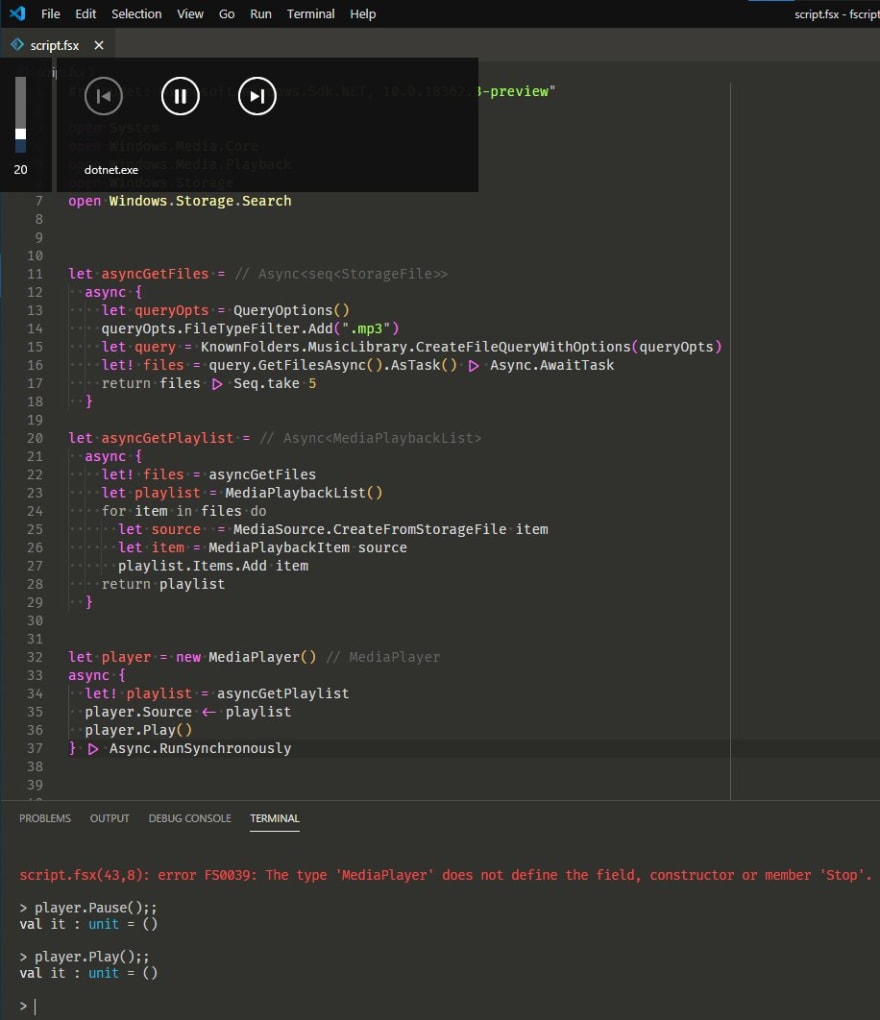 To run this sample type
dotnet fsi --langversion:preview media-player.fsx
(or whatever the name of the file is), also don't forget to download .net5 preview

Nothing fancy so far, we are just opening the namespaces that contain the types and classes we will use along the way

Here we define the function asyncGetFiles inside we do a query to get only .mp3 files also the Windows.Storage.Search API contains some nice classes to create complex queries on files as well as give you a number of ways to present that information to you.

Like in our first example we get the files from the music library in an asynchronous way. Since this is a prototype we just take 5 but we could bring the entire in a single trip if we wanted to.

Now, it may seem convoluted having to create a source for the item then a source for the playback item then adding it to the playlist but here's the cool thing they are abstractions that will allow you to control the playlist and the player in an easy way without worrying what is the actual source of the media you will play, because you can play physical Video, Music, and even Streams the source can be in your hard drive or can come from the internet the API is pretty flexible.

This part is pretty simple I believe, just get the playlist, assign it to the player, then start playing.

when you have a player in memory you will be only able to Play/Pause if you want to stop completely you need to dispose the player
player.Dispose() that will also release the SMTC integration you may have had added.

So... Yeah! using F# 5.0 scripts to prototype and explore API's is a blessing. Once F#5.0 is GA (Generaly Available) you could also set a few snippets of code to showcase how simple is to use F# to do complex things (like some of the stuff you can do with the WinRT API) if you want to get some of your Colleagues to adopt F#

If you have any doubts/comments please feel free to write them below or to ping me on twitter 😁 thanks for the time you spent here.

Don't use String.ToLower() in C# when comparing strings