Cover Photo by AbsolutVision on Unsplash

If you're anything like me, you have an itch you just can't scratch when working for someone. Maybe you're not very interested in the types of work presented. Perhaps you're feeling burnt out for doing many long hours maintaining legacy systems. At the very least, you want to create something new and launch it for the world to see.

I'm not a doctor but... it sounds like you've got the entrepreneurial bug. 🤔

You might have reservations about using the word "entrepreneur". I feel that "entrepreneur" is considered a bit of a dirty word in some circles - a word some use to describe "dreamers" and those they have far fetched plans without real world basis. In reality though, it is just one of many terms like "creator", "inventor" etc to describe someone putting in the hard yards to make an idea come to fruition.

The entrepreneur/creator/inventor and their execution of an idea is one vital part of a success story but regardless of what you might hear, the idea itself still plays an important role. Amazing execution of a bad idea won't make it better. That said, terrible execution of a good idea is not a path to success. While it might sound obvious, great execution of a great idea is always going to have the best results.

How do you come up with an idea though? How do you know the idea is great? My friends say my idea is great, how do I get millions of dollars in seed funding?

The best ideas start from a problem, not a solution.

Probably the first thing to keep in mind is not to try and shoe-horn a problem over some solution you threw together. Don't just go "I made a cool thing and now I want to sell it to become a millionaire" as you'll likely be disappointed.

For example Garrett Camp, co-founder of Uber, had the realisation of Uber when a private driver for a night out cost him $800.

The reason problems are important is that they help you identify customers and determine market size. If your problem is unique to you alone, you're off to a bad start. If your problem occurs to people who do X while doing Y and Z once in a blue moon, again not particularly practical as it ends up being too niche and too infrequent. The combination of frequency and severity of the problem help guide how important the problem is to be solved.

A reasonable follow-up question to this is now though: How do I find a problem to help come up with an idea?

Honestly, think about what you do in every day life. Think about things you don't like and things that you think could be done better. Think about your skills in relation to these things and what you could contribute. If "I am unhappy with the cost of private drivers" helped create Uber, what is the next big idea that starts off so simple?

Now you might have a problem and an idea to solve it...

My friends/family/Uber driver say my idea is amazing!

I don't want to disappoint you but unless this they are your target audience, take it with a grain of salt.

I'm not saying their feedback is entirely irrelevant but they might know you too well to be critical in their feedback or not know you well enough to care. You don't want to fall into the trap that everything is amazing that you go all the way up to launch and it falls flat on its face.

There is a popular diagram that I think helps explain this really well. 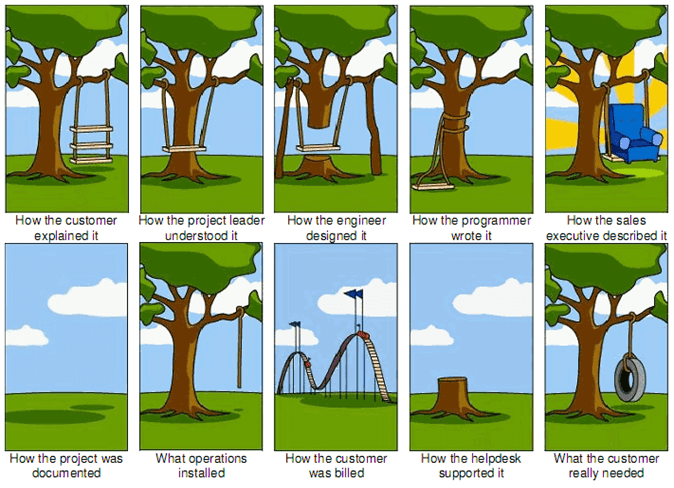 Your understanding of the problem and solution might be any of the swings on the first row. If customers really only needed the last swing on the second row, you will likely miss the mark - this is why it is critical to talk to your customers. Your friends/family/Uber driver likely will not help point you in the right direction unless they are your customers!

The diagram does show the client explaining the problem is the first swing but this is the art of good ideas and good execution. Good ideas solve customer problems. Good execution prevent all the bad examples in that diagram.

Ideas are important. Great ideas come from problems. Problems can come from anything you do in your everyday life. Validate your problems with potential customers.

After all of that, now you can go start executing your idea!