So someone at Google released a tool called zx a couple days ago, and...

Well, take a look at it for yourself: 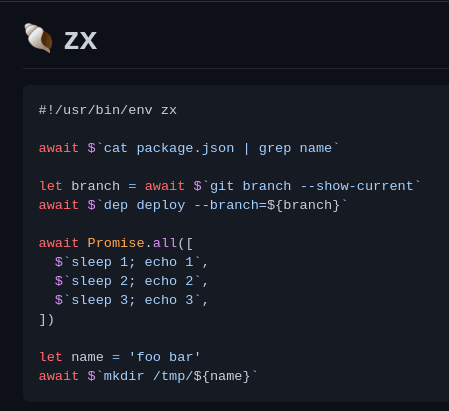 I can't be the only one who doesn't like:

And I thought I could do better, so I tried. And this is what I came up with:

It fixes the two problems I had in the following ways:

Alternatives to SQLAlchemy for your project - Prisma case

Building a keylogger with Python

Once suspended, tusharsadhwani will not be able to comment or publish posts until their suspension is removed.

Once unsuspended, tusharsadhwani will be able to comment and publish posts again.

Once unpublished, all posts by tusharsadhwani will become hidden and only accessible to themselves.

If tusharsadhwani is not suspended, they can still re-publish their posts from their dashboard.

Once unpublished, this post will become invisible to the public and only accessible to Tushar Sadhwani.

Thanks for keeping DEV Community safe. Here is what you can do to flag tusharsadhwani:

Unflagging tusharsadhwani will restore default visibility to their posts.