Top 5 Things NOT to Say in a Job Interview 👇 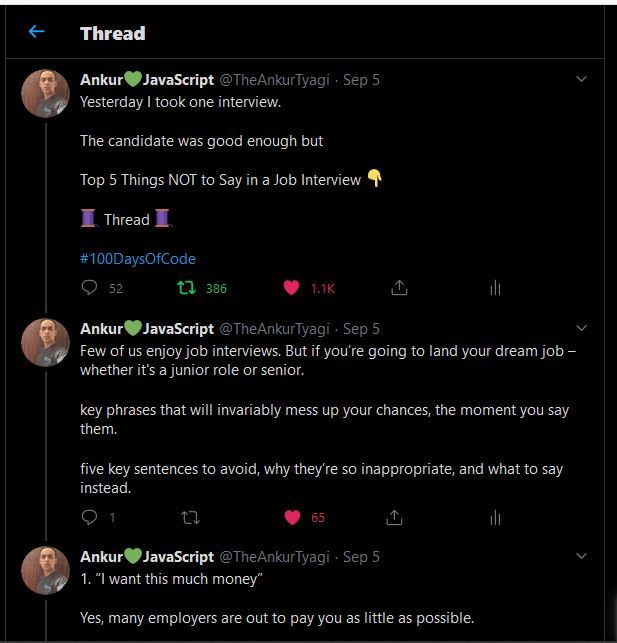 Few of us enjoy job interviews. But if you’re going to land your dream job – whether it's a junior role or senior.

key phrases that will invariably mess up your chances, the moment you say them.

five key sentences to avoid, why they’re so inappropriate, and what to say instead.

Yes, many employers are out to pay you as little as possible.

Yes, you should be forthright and not accept less than what you’re worth.

But that doesn’t mean you should start laying down red lines before you’ve even got the job.

That attitude of ‘How much are you going to pay me?’, right away, immediately puts me off interviewing someone.

The problem is that some people who are just graduating often think they’re much better than they really are. But even with a four-year degree, they’re really not.

2. “I think my work speaks for itself”

If you’ve been asked to interview, it’s a likely sign that someone’s impressed with your portfolio. Good job.

But that’s only got you to the first stage.

To succeed at the interview, you’ve got to explain the thinking behind your work,

the challenges you faced and how you overcame them.

If you fail to grasp this, and wrongly assume that your work “speaks for itself.

“At the interview, we look for people who can articulate their creative process, describe the challenges they’ve experienced.

3. “I actually don’t know much about the company”

if you walk into an interview showing that you’ve made little effort to research your prospective employer,

why on earth would they think you’re going to make any effort as an employee?

So get creative with Google read about the company

Towards the end of the interview, you’ll be asked if you have any questions. “And the worst thing you can say is NO

“Make sure you have some questions up your sleeve, to show you’re interested in the job and company.”

You think that if you’ve read the company properly beforehand, you shouldn’t have anything left to ask,

but that's a mistake.

Your research doesn’t reduce the number of questions you can ask at the interview, it simply gives you a chance to ask more intelligent and good ones.

In interviews, you should always sell yourself, exude confidence, and project an image of positivity.

But in doing so, it’s easy to get caught up in your own hype and start exaggerating what your abilities and skillset actually are.

“I think the worst thing you can say in an interview is something that’s untrue because if they sense you’re talking crap, you just look even more under-experienced,”

“It’s much better, to be honest, and say you don't know

Hope this helps you 💙👍

Getting started with Datree