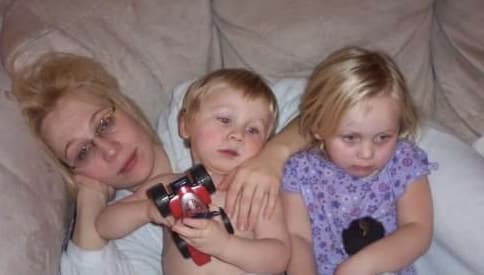 I chose this picture for my post because this is how I started. Thanks to my father I was involved in tech very early. I built my very first PC in 1993 when I was 16 years old. My dad said “You can have a computer but you have to build it.” So I did...once finished he put me to work on the other 119 he had out in the garage for a client.

I married early, divorced not much later than that and found myself alone with two little ones in tow. At the time I was earning a degree in creative writing and photography, but it became apparent that a Liberal Arts degree was not going to be enough to provide for my babies and I. So with three jobs and two children I switched my degree to Information Technology hoping to put to work the skills my father had given me so many years before.

My first job offer was with EDS and the conversation went something like this “Do you have the aptitude to be a developer?” And me with 3 coding courses under my belt and no other prospects answered “why, yes I do!”.

In 2008 I was hired right out of college and moved my little family 200 Miles away from everyone I knew to start a job that scared me more than I’d ever let on. However, I was very lucky and EDS started my career with a 6 week coding boot camp that made up for the knowledge I lacked being IT and not CS. EDS was acquisitioned by Hewlett-Packard and I found myself developing for HP only a year later. I learned everything I could, but it was my peers who really set me on my path to success. I made invaluable alliances those first four years that set the tone for my entire career. I will always remember the faces of those who showed kindness and let me into their world.

10 years later I am now a Software Engineering Manager, and I am an unwavering advocate for the unlikely candidate everywhere. Being a single mother in development was not an easy path by any means, but it’s a path I’d still take today. My advice to anyone starting out in development would be to surround yourself with people you admire and sometimes the only difference between success and failure is simply never giving up.

Error monitoring and its best practices

Vanessa Adler
The Future Of Software Engineering: Is Low-Code The Answer? [Infographic]
#programming #webdev #lowcode #productivity
Who or what are you grateful for in tech?
#discuss
The perfect open-sourcer does not exist
#opensource #beginners #github #productivity

Once suspended, vadler will not be able to comment or publish posts until their suspension is removed.

Once unsuspended, vadler will be able to comment and publish posts again.

Once unpublished, all posts by vadler will become hidden and only accessible to themselves.

If vadler is not suspended, they can still re-publish their posts from their dashboard.

Once unpublished, this post will become invisible to the public and only accessible to Vanessa Adler.

Thanks for keeping DEV Community 👩‍💻👨‍💻 safe. Here is what you can do to flag vadler:

Unflagging vadler will restore default visibility to their posts.