Testing functions that use input() is not a straightforward task. This tutorial shows how to do that.

Contest programming problem solutions are usually tested automatically. So the input is just a set of strings with predefined format that fed into standard input.

Suppose, for example, a problem requires us to read in N stacks of different sizes. Then input might look like this:

Here, 3 is the number of stacks to read in. The first number on each subsequent line is the size of the stack (which is not required in Python, but is helpful in other languages), followed by its elements.

To extract data from the input, a few manipulations have to be made:

And it doesn't take a lot of effort to make a mistake here. In fact, I already made one in the code above. So, it would be nice to have automatic tests for this kind of functions too.

One of the solutions I found on StackOverflow when applied to my problem looks like this:

When I run the test, I see that it fails: 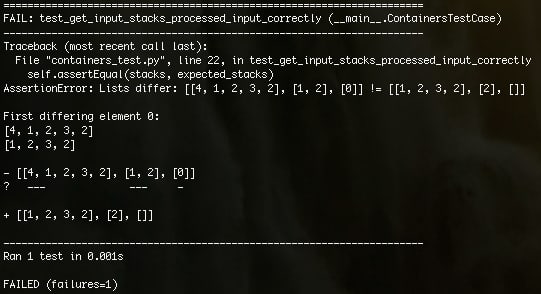 The problem is that I read in the size of the stack as an element of the stack. Instead, I should just ignore it: str_stack = input().split(' ')[1:].

How the solution works

This is the most interesting line in the test:

I assume it is known how with statement works. unittest.mock.patch has several keyword arguments that modify its behavior, but in this case, it simply replaces built-in input() function with a unittest.mock.MagicMock object. One of the properties of the object is to return its return_value unless its side_effect returns something else:

Notice that side_effect, unlike return_value, is a function. side_effect can also be an exception object (then the exception will be raised when the mock is called) or an iterable. If it's an iterable, the mock yields a new value every time it's called:

and this is what we are trying to achieve by mocking input(): a different predefined value each time it is called. This is why we are passing side_effect=user_input to the patch() function (side_effect is both a property of MagicMock and a keyword argument of patch()):

The argument 'builtins.input' contains a name that points to the input() function. What patch() does is it basically makes this name point to the MagicMock object until the end of the with block. An object in Python can have multiple names, so patch the right one (here's how). builtins is a module where built-in function names are located:

Each time the function get_input_stacks() calls the patched input() it gets the next string in the user_input list. This is the behavior we wanted.

To get a better understanding of the capabilities offered by unittest.mock, it is best to read the manual. As an exercise, I would suggest testing a function that does the reverse of get_input_stacks() by patching print().

A Visual Guide to Regular Expression

Pavel Vergeev
Developer from Moscow with a narrow specialization in Python and Django
Django Celery Beat: How to get the last time a PeriodicTask was run
#python #django #celery #tutorial
Testing against unmanaged models in Django
#python #testing #database #django