This article was first published on my blog.

When we build an application that embraces data immutability, we handle changes in data by creating a new version of data instead of mutating data in place, without compromising on performance. There are various techniques to achieve data immutability in an efficient manner.

JavaScript data manipulation libraries like Ramda and Lodash FP provide an interesting implementation of structural sharing via a technique called path copying. The cool thing with path copying is that it works with native JavaScript objects.

After reading this article, you will:

Remark: This article assumes that you are already aware of the benefits of data immutability.

What is structural sharing?

Structural sharing provides an efficient way to share data between multiple versions of it, instead of copying the whole data.

It's kind of similar to the way git manages multiple versions of your source code: git doesn't copy all the files on each commit. Instead, the files that are not changed by a commit are shared with previous commits.

The same strategy could be applied with data. Let's take as an example a map that represents the data of a library in a library management system. In this map, we have 4 fields:

Here is an example of a tiny library, with two users and a single book:

Suppose we want to create a version of the library where the address field is modified. We can achieve that by shallow copying the original library and modify the address field, using Object.assign().

Like in git, we don't want changes in a commit to affect files in a previous commit!

We could solve this challenge in a very naive way by deep copying the whole map when creating a new version of it. But of course, it would have a negative impact on the performance, both in terms of memory and CPU.

Another approach is to prevent data from being changed. When data is immutable, we don't need to protect ourselves from the threat we just mentioned. It is safe to do a shallow copy of the data because immutable data never changes.

Data immutability could be guaranteed either by convention (and code reviews) or by the program itself. For example, JavaScript provides a way to prevent data from being changed, via Object.freeze(). Here is an implementation of a deep freeze, from MDN:

That's the essence of structural sharing:

Here is a code snippet for a function called set() that implements structural sharing when the change occurs at the root of the map:

Creating a new version of data with a change at the root of a map is easy. Now, we are going to show how to handle changes at any nesting level in a map.

Implementation of path copying in JavaScript

Suppose we want to update the password of a user and see how to apply recursively our structural sharing strategy: 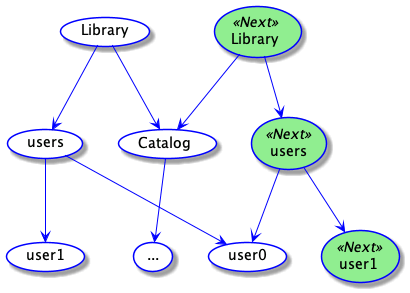 And now, let's generalize this approach with a recursive functions. As we promised in the article title, here is an implementation of structural sharing in 7 lines of JavaScript code:

Here is how we use setIn to modify the password of a user:

Of course, the previous version is left unchanged:

Path copying is usually efficient -- both in terms of memory and computation -- because most of the nodes in a nested map are copied by reference (shallow copy).

For example, the catalog map (that could be a huge object) is shared between the original library data and the new version of library data. They both use the same reference.

Path copying works fine with deeply nested data where at each nesting level we don't have too many elements. When we have many elements at some level, shallow copying might be an issue. Suppose we have a million user in our system, copying a million references each time we update the password of a user is not acceptable.

The same issue occurs with git if you have a folder with too many files.

In my book about Data-Oriented programming, I discuss techniques to overcome this limitation.

The book illustrate in details the benefits of building a software system based upon data immutability.