Have you ever been heard of execution stack? If your answer is no then you can follow along with this blog and if yes you can just review about execution context and execution stack. How does JS engine work? Let's find out the JS working mechanism together. We will have to find out what are the followings and how they work.

So, we are going to study all of the above topics in detail. Let's start... 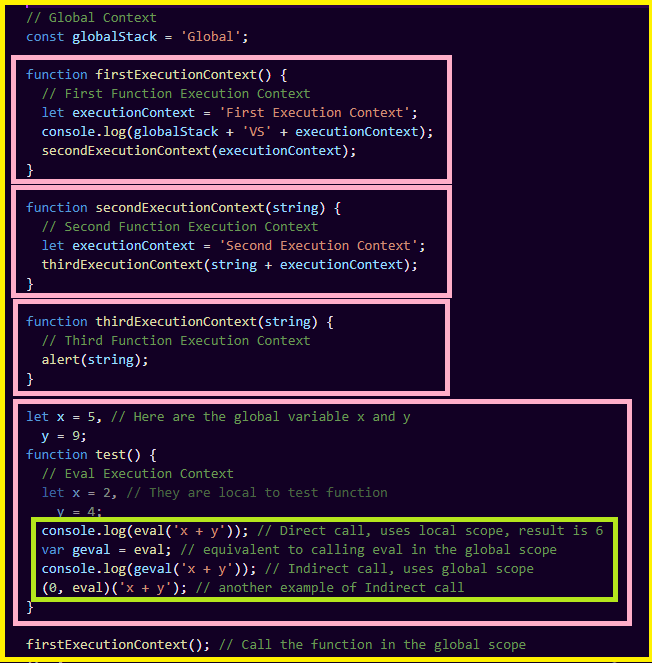 Let's watch how the above two phases work behind the scene.

In the creation phase, the function execution context object is created. If we further down the execution object, we can divide that into two environments.

Without wasting time, let's see what they are.

Please notice this place, we will reference later to this point in the HOISTING section of this article.

Actually when a this. is found in the code, this usually refers to an object in which scope it is called. When this keyword is used inside a function, then this will indicate to the global window object in the browser. If it is called using any method or property, then it belongs to a specific object in which the method is invoked. The this keyword is not assigned a value until the function it is in is invoked.

During this phase, the codes are executed. The variables are assigned with their appropriate values and the functions do their jobs. Each of the functions pushed on the stack are executed in a first-in-last-serve manner. When a function is executed, its function execution context is removed from the execution stack.

All javascript developers should know the concept of hoisting. This is a new term born with ES2015. The actual concept is that when we declare a variable or a function in JavaScript we can use them before the declaration. Let me explain with some codes. We are going to refer the variable object (VO) section in this blog.

As in the above code and the reference from the VO section, we now know that when a variable is declared, it will be assigned with undefined due to hoisting during the interpretation. When the variable is initialized with a value, then there will be no effect because of hoisting. Where a function declaration enables the program to use the function before its declaration statement in the code. These are all the effect of hoisting. In technical term, during interpretation, the variable declarations take places for those variables on the memory and this is same for function. That's why we can access the variables and functions before their declaration.

The last but not least is the eval execution context. We are not going to do detail discussions about eval execution context because most programmers do not use this. It is obsolete. That means that it is still supported by browsers but it is a best practice not to use eval in any new project you are going to start. The actual function it does is nothing but only executed string which is just javascript code.

This is the end of our blog. I hope I provided as much knowledge I know about JS and you can read the following articles which will explain in more detail.

JavaScript made it into space 🚀