​
There have been many discussions on Stack Overflow and GitHub around implementing infinite scroll using React Native, on top of FlatList or SectionList. I've found that there aren't any easy solutions out there for bidirectional infinite scroll, which works on both Android and iOS. Recently, while working on v3.0.0 of React Native Chat SDK at Stream, we added bidirectional infinite scroll to our chat components. We had to jump through plenty of hurdles to make it happen while maintaining a good user experience around scrolling (especially for Android). Thus we decided to publish an excellent and small open-source package, on top of FlatList, to make this task easier for other React Native developers.​

As mentioned earlier, this package is a wrapper around FlatList, and so it can be used exactly like FlatList from React Native, with few additional props:

Scroll down further, for the tutorial

This section will walk you through the hurdles of implementing bidirectional infinite scroll and how we solved them.
​

FlatList from React Native has built-in support for infinite scroll in a single direction (from the end of the list). You can add a prop onEndReachedon FlatList. This function gets called when your scroll is near the end of the list, and thus you can append more items to the list from this function. You can Google for React Native infinite scrolling, and you will find plenty of examples for this. Unfortunately, the FlatList doesn't provide any similar prop for onStartReached for infinite scrolling in other directions.
​
We have added support for this prop as part of this package by simply adding the onScroll handler on FlatList, and executing the callback function (onStartReached) when the scroll is near the start of the list. If you take a look at the implementation of VirtualizedList, you will notice that onEndReachedfunction gets called only once per content length. That's there for a good purpose - to avoid redundant function calls on every scroll position change. Similar optimizations have been done for onStartReached within this package.
​

To maintain a smooth scrolling experience, we need to manage the execution order of onStartReached and onEndReached. Because if both the callbacks happen at (almost) the same time, which means items will be added to the list from both directions. This may result in scroll jump, and that's not a good user experience. Thus it's essential to make sure one callback waits for the other callback to finish.
​

FlatList from React Native has a support for the prop onEndReachedThreshold, which is documented here
​

FlatList from React Native accepts a prop - maintainVisibleContentPosition, which makes sure your scroll doesn't jump to the end of the list when more items are added to the list. But this prop is only supported on iOS for now. So taking some inspiration from this PR, we published our separate package to add support for this prop on Android - flat-list-mvcp. And thus @stream-io/flat-list-mvcp is a dependency of the react-native-bidirectional-scroll package.
​

Now let's see how we can implement a chat message list, scrolling infinitely in both directions.

Next, run the app:

Note: The server will auto-refresh as you make changes to the code.

Open this project in some editor (I love VS Code) and open App.js in the project's root directory.
​
We are going to populate the list with dummy messages. In a real application, these messages are queried against a server. For example, we can write a simple utility function to mock this API call for querying n number of messages.
​
Create a file - utils.js

Next, let's write a small UI component for the message bubble. Create a file named MessageBubble.js.​


​
Now let's first implement a simple list, which renders these messages on the first load. Copy the following content to App.js and hit save.

You should be able to see the list of messages as shown in the screenshot on the right.
​ 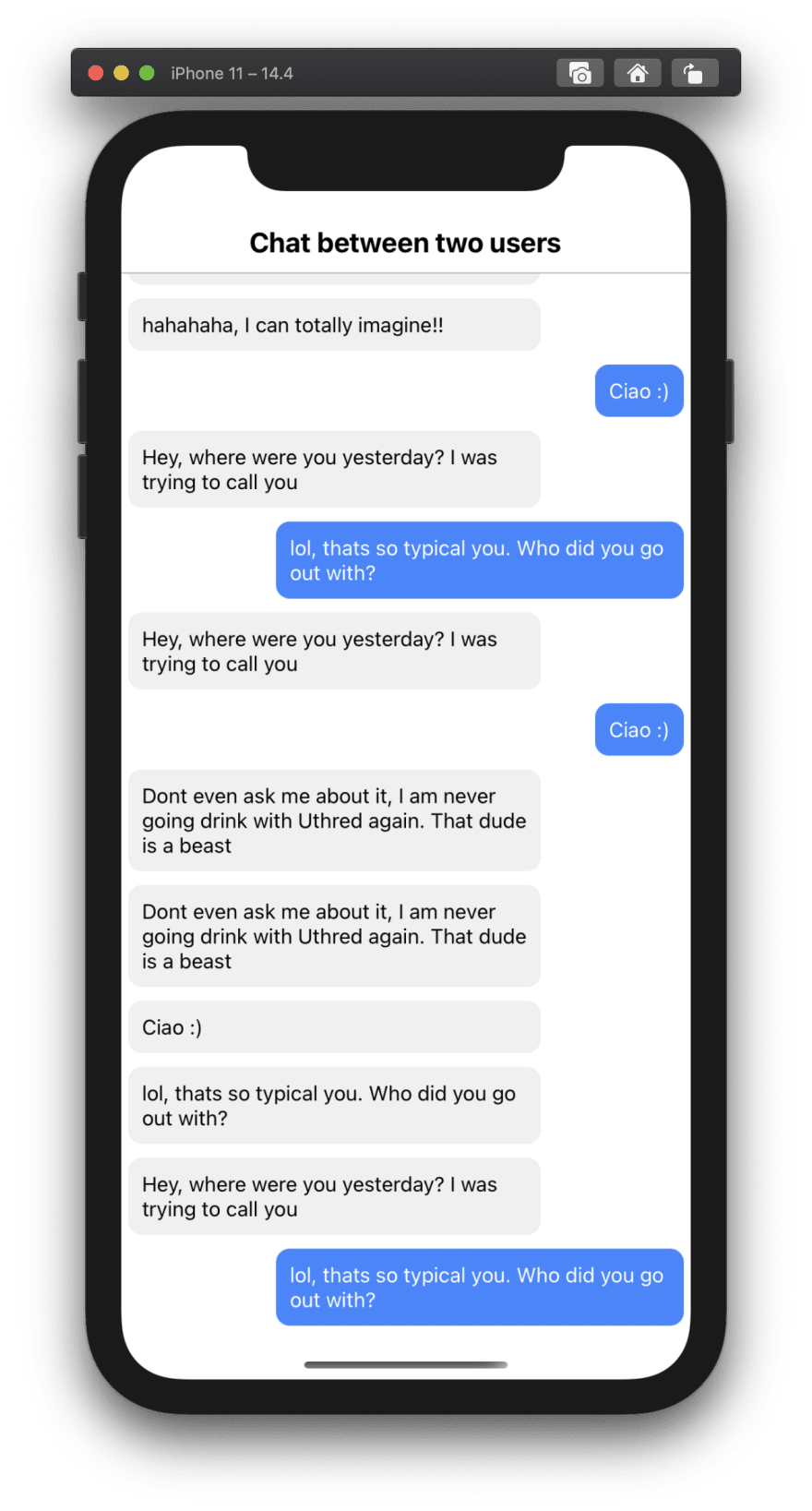 Next, let's implement infinite scroll to the list by adding onStartReached and onEndReached prop functions.

Replace the contents of App.js with the following:
​

And that's it. If you scroll up or down, you will see new messages being loaded in the list and scroll position being maintained as well (both for Android and iOS)
​

In real chat applications, you don't actually "infinitely" scroll. There is always an end to the loadMoreRecentMessages function. And after this point, you will want the scroll to automatically move to the bottom of the list, as other users send a new message or if you send a new message.
​
Basically, after this point, we want to enable the "autoscroll to top" (bottom in our case, since the list is inverted) functionality of FlatList. You can do this by setting a prop enableAutoscrollToTop as true. Additionally, you can also set autoscrollToTopThreshold to true.
​

Replace the contents of App.js with following

Now scroll to the bottom couple of times, until you can't load any more recent messages. Now try to send a single message by pressing the "Send Message" button. You will see scroll automatically scrolling to the bottom of the list. But if you scroll up a bit and then send a message - then the scroll position will be maintained. The autoscrollToTopThreshold prop controls this threshold.

I hope you found it useful. Feel free to add some questions, comments, and feedback here. And don't forget to put a ⭐ on github repo. Happy Coding!!

How to fix all build errors in react native(Android specific).

Getting started with contributing to open source – Real world example