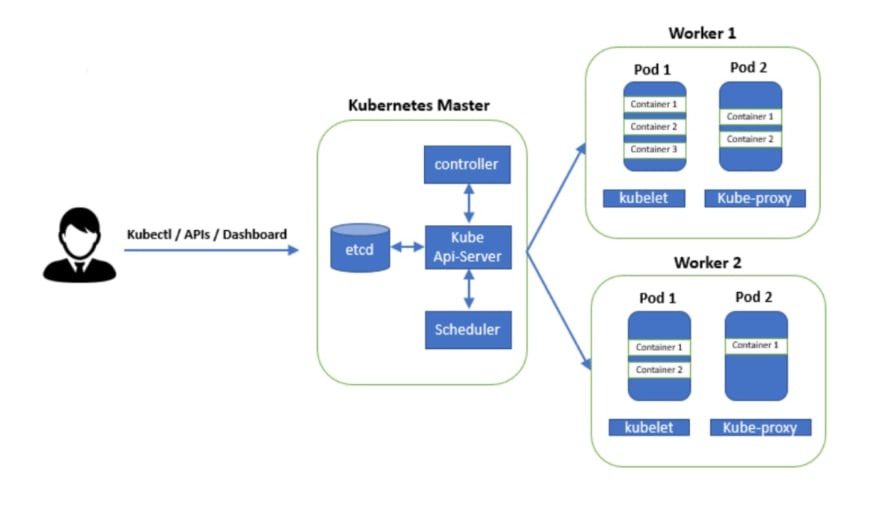 If you are curious to know, Why need of Kubernetes & Docker and their basic definations, then feel free to go through it---> https://dev.to/viveksahu26/kubernetes-for-beginners-basic-part-why-need-of-docker-k8-s-2bgf

What is a Node? Node refers to a computer or pc or virtual machine. You can consider the master node as a manager position of any company and worker node as a employee of that company. It's totally up to you assign nodes as a worker or master, but keep in mind that their must be only one master node & more than one worker node under master node or in a cluster.
Cluster is a set of worker machines, called nodes, that run containerized applications. Every cluster has at least one worker node.
It is responsible for managing the state of k8's cluster and it manages and control worker nodes. It also provides an environment for control panel.

It is known as "kube-api server", a central control plane component running on the master node. Every components of master node communicate with it. The API Server is the only master node component to talk to the etcd data store, both to read from and to save Kubernetes cluster state information. During, processing it reads the current state of the worker nodes from etcd and matches it with the Desired state. For now assume etcd as a data storage, we will cover it in details later.

If scheduler doesn't find feasible nodes for pods, then they remain as it is till scheduler finds feasible node and these pods are known as non-schedule pods.

Here is one example of a control loop: a thermostat in a room.

It's a key-value data storage for storing Kubernetes cluster state. It also stores configuration data of each nodes existing in cluster. New data is written to the data store only by appending to it, data is never replaced in the data store.
Note:- It is only accessible to kube-api server.

As the scheduler assign the feasible node(here refer to worker node) for a pod. Now, from here the role of worker node starts. Worker nodes knows its job very well that what to do next.

Btw in Kubernetes, each component knows their job very well, there is no need to tell each components what to do next. For ex.:- As we have seen above that Master node don't have to tell scheduler about its role, to schedule pods to feasible nodes. Scheduler knows its role very well and start working as soon as it gets newly created pods or non-scheduled pods. Similarly, worker nodes knows their job as soon as they get pods. It provides running environment for client applications. These applications are encapsulated in Pods, controlled by the cluster control plane agents running on the master node.

A Pod is the smallest scheduling unit in Kubernetes or in another words Pods are collections of one or more container. And inside these containers your application runs.

A hypervisor-based container runtime for Kubernetes.

The kubelet is an agent running on each node and communicates with the control plane components(i.e api-server) from the master node. It gets instructions from the api-server and interacts with the container runtime on the node to run containers associated with the pod.

As the pods get scheduled by scheduler to a feasible node existing in a cluster. Then worker node components i.e. kubelet starts its job.

The Kubernetes network proxy runs on each node. It is responsible for dynamic updates and maintenance of all networking rules on the node.

Once suspended, viveksahu26 will not be able to comment or publish posts until their suspension is removed.

Once unsuspended, viveksahu26 will be able to comment and publish posts again.

Once unpublished, all posts by viveksahu26 will become hidden and only accessible to themselves.

If viveksahu26 is not suspended, they can still re-publish their posts from their dashboard.

Once unpublished, this post will become invisible to the public and only accessible to vivek kumar sahu.

Thanks for keeping DEV Community 👩‍💻👨‍💻 safe. Here is what you can do to flag viveksahu26:

Unflagging viveksahu26 will restore default visibility to their posts.