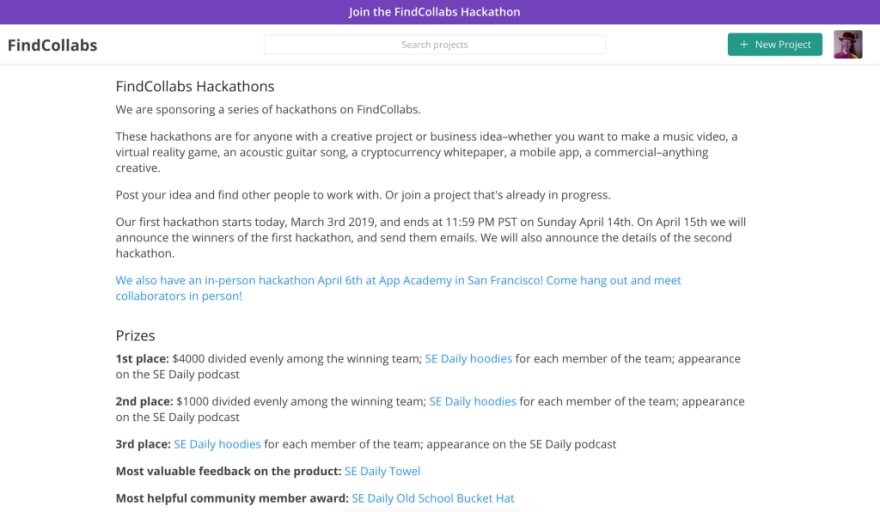 But winning can be quite nice, too.

You’d think that even in Silicon Valley, five thousand dollars ($4000 for top project, $1000 for second) would be motivating, but at the FindCollabs hackathon, I heard almost no chatter about the prizes. People just found what they wanted to work on, and got to it. Which doesn’t mean it doesn’t matter at all; I’m sure it tipped the balance for a number of people in terms of showing up to the App Academy meet-up last Saturday.

In game design, we talk about aligning incentives. The idea is, you want to make it fun to do the thing that makes the game work, and make it rewarding to do the thing that’s fun. The hackathon is a great example; people didn’t show up just for the cash. They showed up because they wanted to collaborate on interesting projects. 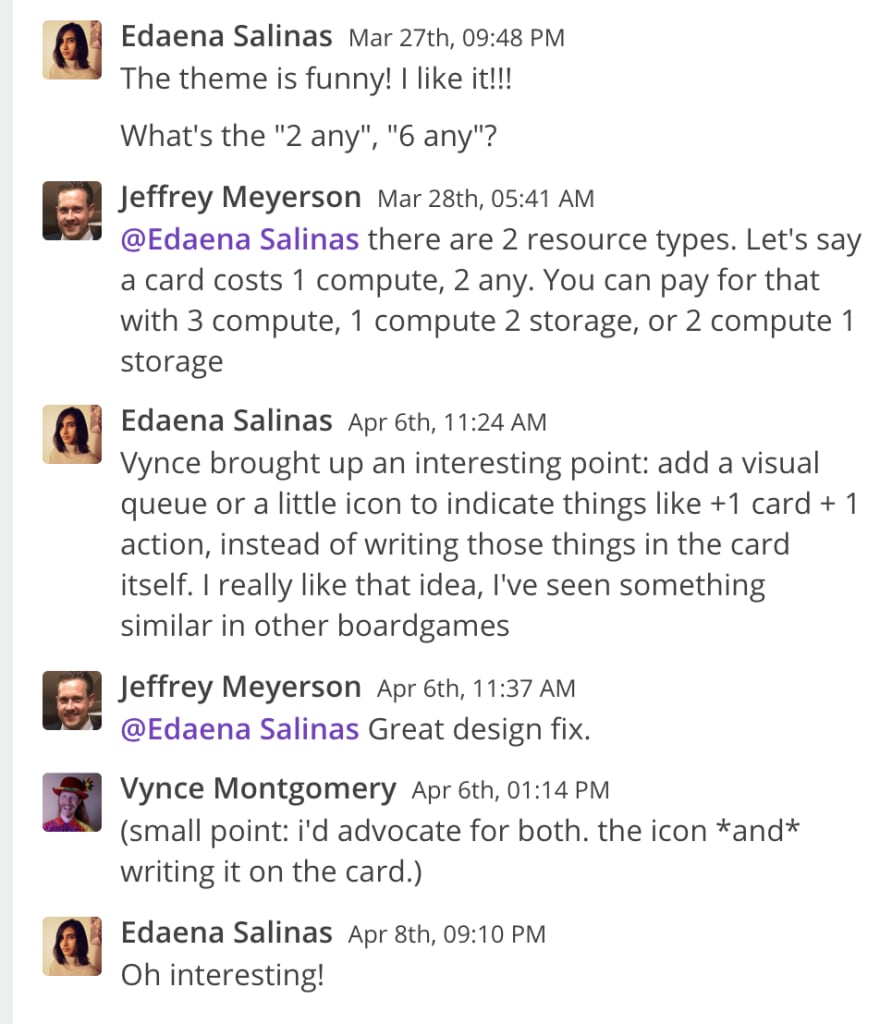 The FindCollabs chatroom is not intended as a full project management tool or a team communication tool, but it can serve basic needs.

Edaena, being one of the contest judges, is ineligible for a prize. But winning isn’t the only way to win. She’s a software engineer and a podcaster, but Saturday she was also a game artist and a graphic designer. She was working on cards for Supercompute, a deck-building game. We spoke about things we’ve liked and disliked in other board games, and how to learn from them to make these cards easy to read. She wasn’t the only person working in a capacity different from her day job; for a lot of us, the chance to do that is really the point.

Game design in particular is a hobby and dream of many. At this moment, there are about a dozen game-related projects on FindCollabs looking for collaborators, from playtesters to artists to designers. Some of those are computer games, such as Knight of the Living Dead and ARhythm, an augmented reality beat-matching game. Some are board games, such as Supercompute and my own Lunatic Market, which three attendees helpfully play tested with me. 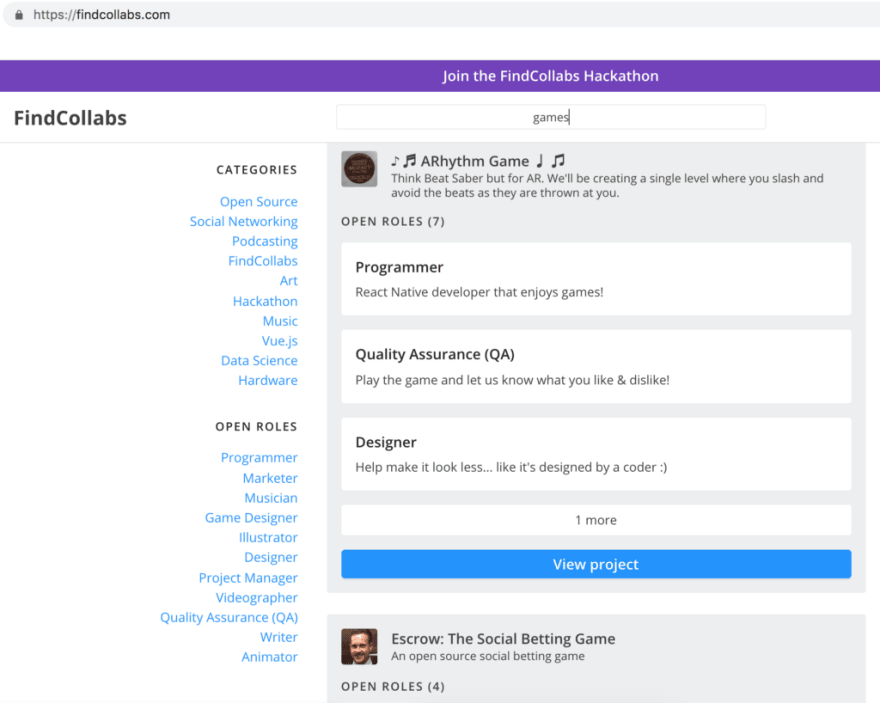 Searching on FindCollabs is easy, fast, and fruitful.

Teaching an early prototype of a game is a challenge of its own. For one thing, during a first playtest I personally often don’t know when the game should end. As I see it, usually it doesn’t matter, since a first game is usually stopped early when something breaks. But you should still know what you’re trying to do, so Marcell asked me at one point, “How do you win?”

“You win by being the designer!” quipped Edaena.

“You’d think that, but as the designer, all I know is how I think the game will work. Playtesting reveals how the game actually works.” 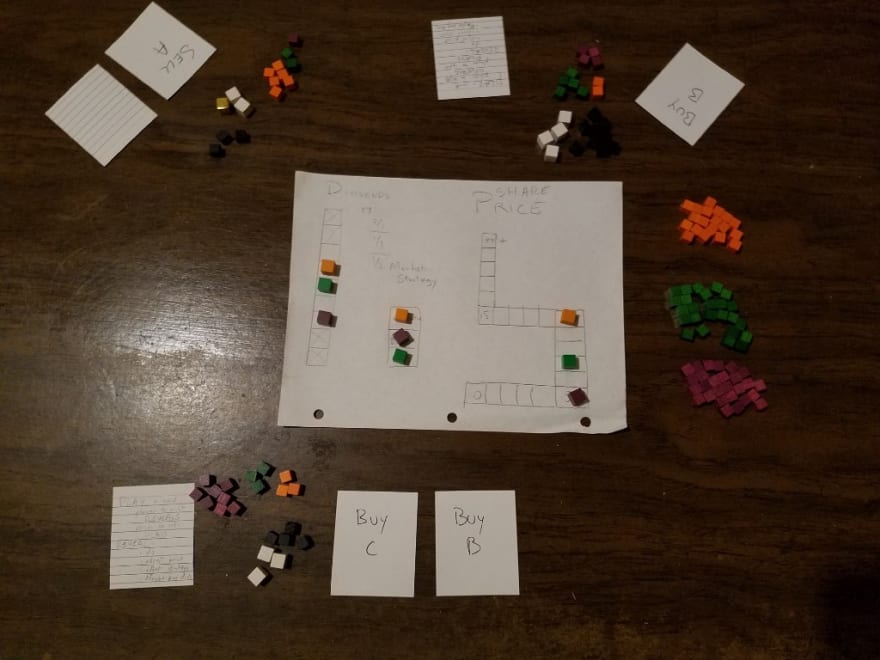 Admire the high quality board, the carefully designed cards, and the full color stock certificates and money. Truly a glamorous business.

When we stopped playing, all the playtesters had interesting things to say about what they’d like to try differently. We talked about game end conditions, surprising emergent properties, which decisions didn’t seem to matter, and what plays we didn’t expect each other to make. And we talked about what winning should even mean. As it happened, our front runner in points was Marianna, who commented that she had played a few board games before but felt like she enjoyed them all more now, having seen the creation process and understood where design decisions came from. I was last. But I did learn a lot about what made the game fun, and how to make the game work better, and that’s what I wanted.

Winning isn’t the only way to win. But as the old adage has it, you cannot win if you do not play the game. The FindCollabs hackathon runs until midnight Pacific time on April 14th. It’s not limited to software; any creative, collaborative project is welcome to enter. Details are available at https://findcollabs.com/hackathon.

when you are wrong

Once suspended, vyncemontgomery will not be able to comment or publish posts until their suspension is removed.

Once unsuspended, vyncemontgomery will be able to comment and publish posts again.

Once unpublished, all posts by vyncemontgomery will become hidden and only accessible to themselves.

If vyncemontgomery is not suspended, they can still re-publish their posts from their dashboard.

Once unpublished, this post will become invisible to the public and only accessible to Vynce Montgomery.

Thanks for keeping DEV Community safe. Here is what you can do to flag vyncemontgomery:

Unflagging vyncemontgomery will restore default visibility to their posts.