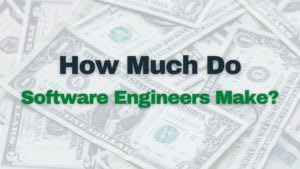 The post How Much Do Software Engineers Make? first appeared on Qvault.

Software engineering continues to be one of the most lucrative career paths in the tech industry. Additionally, the rewards go well beyond a high salary, corporate health insurance plans, and an increased opportunity to advance. Software engineers often receive benefits like unlimited time off, no need to find coworkers to cover shifts, lax or no dress code, and cool office amenities like free drinks, snacks, ping pong, etc. It’s can be a really great work culture.

Why Are Engineers Compensated So Well?

At the end of the day, like all professions, it comes down to supply and demand. Computer science is a “hard” subject just like anything else in STEM, but unlike math or traditional engineering, there are so many more open jobs that need to be filled. Take a look at the following numbers from the U.S. Bureau of Labor in 201:

We already need around twice as many software developers as we do mathematicians, chemical engineers, civil engineers, electrical engineers, and mechanical engineers combined. For this reason, learning to code is a valuable skill that will ensure you are a highly compensated member of society for the foreseeable future.

Some of the most successful software developers didn’t even take a traditional career path, and that’s what we find most exciting about this career’s prospects for the future. You can break into the development industry by simply taking courses online, attending a real-life boot camp, or getting a degree from the university.

How Much Do Web Developers Make Based on Their Coding Language?

Salary varies based on several factors, such as company location, job title, years of work experience, and the specific type of technologies used, which primarily includes the coding language of the development team.

Let’s take a look at the Stack Overflow 2020 survey to see which languages are the highest paying, and which you should learn. Stack Overflow thrives as a community hub and resources for programmers, so data that they glean forms a fairly representative picture of what software developers actually make in the real world.

The top-paying languages in the USA are (with median salaries):

As it happens, we have several great Go courses to jumpstart your career:

Is It Best to Specialize in One Language?

As long as coders are specializing in a high-demand language or technology, then becoming an expert with one or two languages is a great way to go. That said, the landscape is always changing and those with a diverse range of abilities will always be able to find good work. One peculiarity of software engineering is that it requires continuous education, practice, and community involvement to keep pace with innovations.

Seventy-five percent of respondents to Stack Overflow’s survey learn new technologies at least once per year to give students an idea of what they face in this career.

How Much Does a Software Developer Make an Hour?

Median salaries for software engineering careers rank among the highest in any industry. Evaluating developer work by the hour typically relates to freelance workers as most engineers work on salary. Fifty-one percent of Stack Overflow’s survey respondents work between 40 and 45 hours per week, which puts software development on par with a typical full-time job in the U.S.

According to data compiled by PayScale, the average hourly wage for software engineers at the end of 2020 is about $35 per hour. However, 10% of entry-level software developers make approximately $20 per hour while the top earners with the most experience and a broad skill set can earn hundreds of dollars per hour, especially if they’re doing consulting work.

How Much Does a Software Developer Make a Year Based on Job Title?

Upper management positions in the software engineering field earn impressive annual salaries. While not the average rate, managers can easily make upwards of $200,000 per year , especially at larger companies. Salary isn’t most the most important thing, however. Often compensation will include equity (ownership) in the company itself. While equity is higher risk than straight cash, it can often result in tens of thousands of dollars in stock value yearly.

Another one of the most attractive aspects of software development as a career is that technology, innovation, and entrepreneurship go hand-in-hand. It’s common for software developers to start their careers working for big tech, only to move on to found their own companies after learning the business. Even the meekest of companies, founded in garages and rented homes (e.g., Apple, Microsoft, and Facebook), have the potential to grow into multi-national multi-billion dollar corporations.

According to Stack Overflow’s data, the top-paying developer job titles in the USA are: 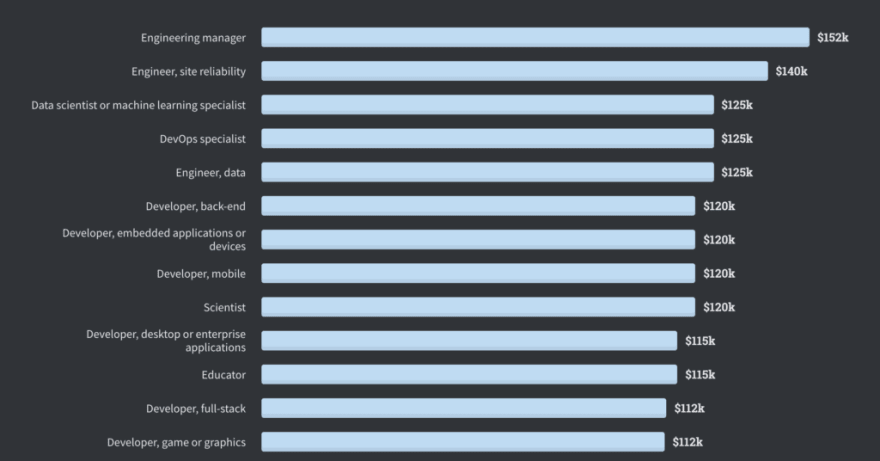 Again, it’s critical to note that the following figures represent median salaries, not the average salary for every worker globally. Median statistics provide a more balanced look at the range of salaries without outliers affecting the results.

Does Location Matter For Developer Salaries?

Generally, U.S. workers make far more than other workers around the world, with the US averages around double the global averages. But why? Again, mostly supply and demand. The largest tech companies in the world are still mostly located in the USA (though that is changing). Many employers prefer to have their employees close, so the demand for developers in the US is huge.

Even salaries within the US fluctuate greatly. For example, data featured by GlassDoor shows that a software developer based in Salt Lake City, Utah, makes around ~$80,000 on average , but this figure is 13 percent below the national rate.

The average annual salary in San Francisco for a software developer with a similar skill set is $115,822 – a significant difference.

By any analysis, a career as a software engineer is one of the most lucrative in the world if job seekers get hired by an American company. Otherwise, salaries drop precipitously due to several factors that include the currency exchange rate and cost of living.

Hopefully this information will help you as you seek to grow your development career! Don’t forget to check out Qvault if you are ready to get started with some courses!

Did I become a better programmer in 2022?

The Importance of Mentorship in Tech