Javascript has become an integral part of modern websites, allowing developers to create interactive, app-like experiences. While the ecosystem has seen some consolidation over the years, there are still quite a few choices you could make. Let's talk about two typical approaches for Rails: "multi-page" and single-page apps.

The web was originally envisioned as a collection of documents linked together. Each time you clicked a link, it would load a new document. Rails was built with this in mind, so if you've done any beginner tutorials, this should be the approach you'd be most familiar with. 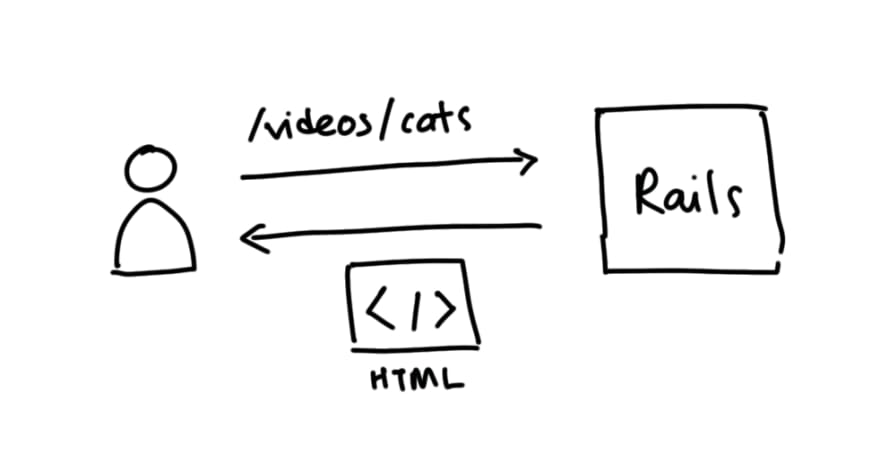 In this setup, routing is handled by the backend - Rails decides which pages to serve based on the requested URL e.g. in the above example, we might have set /videos/cats to route to a VideosController, which will render a videos/index.html.erb view.

Example libraries that can work in this paradigm include JQuery, Stimulus, React or VueJS.

SPAs are a pretty radical departure from the multi-page paradigm. They essentially take partial page replacement to the extreme - the Javascript framework handles almost everything. Let's look at an example setup: 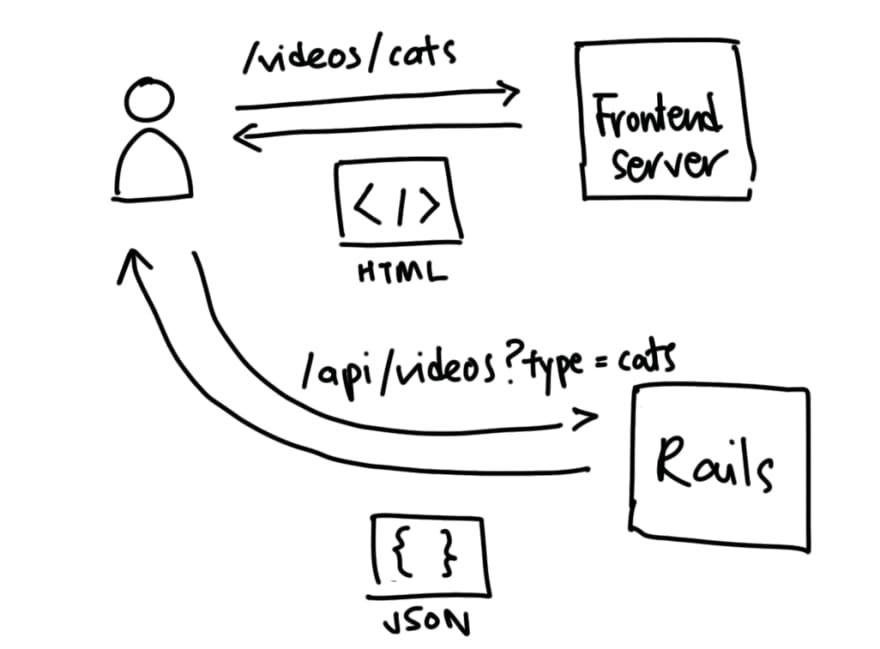 In the above example, we host our frontend on a separate server. When someone enters a URL, our frontend server will return a single page, and the Javascript takes over:

For the most part, Rails is "API-only" - we may not even need the Asset Pipeline! This might sound antithetical what Rails is ("everything you need to build fantastic applications"), but as with anything in technology, there are tradeoffs that make this worth considering:

Examples of SPA frameworks include React (with some companion libraries), VueJS, EmberJS and AngularJS. React and VueJS are repeated here because they can operate in both paradigms: as "sprinkled" Javascript, or as a full framework.

So, what to choose?

If you're new to Rails and web development, I'd humbly suggest to lean toward a "multi-page" setup. You'd have less complexity to maintain and a gentler learning curve. SPAs can come later (in fact, you might not even need to host your own backend to work with an SPA).

We'll take a look at different options for "multi-page" apps in the next post. You can follow me on Twitter to be the first to know when it's ready.

Nick
Don’t give up on your Rails Generators!
#ruby #rails #productivity
Asset Compilation in Rails
#rails
Choosing a Rails Frontend in 2021
#rails

Once suspended, wasabigeek will not be able to comment or publish posts until their suspension is removed.

Once unsuspended, wasabigeek will be able to comment and publish posts again.

Once unpublished, all posts by wasabigeek will become hidden and only accessible to themselves.

If wasabigeek is not suspended, they can still re-publish their posts from their dashboard.

Once unpublished, this post will become invisible to the public and only accessible to Nick.

Thanks for keeping DEV Community safe. Here is what you can do to flag wasabigeek:

Unflagging wasabigeek will restore default visibility to their posts.