Yes, I got the Switch at the start of November. 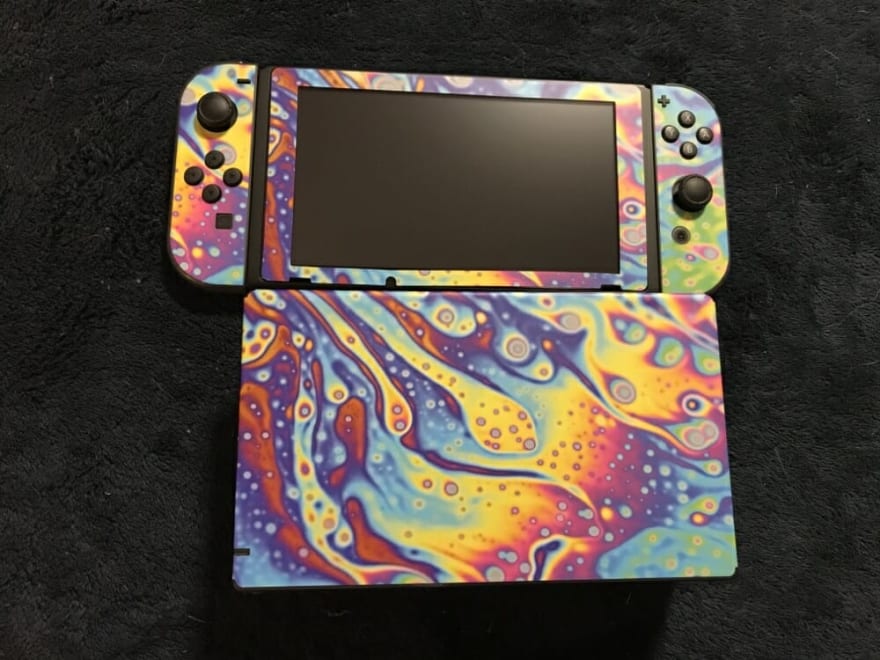 This skin is my aesthetic. It’s from decalgirl.com

Yes, that is a lot, so many hours. Many of them were on planes and in waiting rooms, but many more were not.

Yes, I do have a lot of internalized shame/misogyny/self-criticism about playing vidya games that much, and I’m working really hard on not listening to that shame, because my value as a human is not related to productivity.

BUT — what’s been interesting is what I’ve learned about how my particular mind works by being able to watch it.

I (my Stardew Valley character is “I” for the purposes here) get up in the morning and I do all the farm chores in a clockwise direction. Sometimes that only takes a gametime hour, and sometimes four, depending on season. But doing them in the same order every time means:

1) I remember to do them all, because I have locational memory. If I get distracted by real life in the middle, and I’m standing in my barn, I know that the next thing is the fishing pond.

2) I don’t have to think about it. That sounds like a trivial/lazy detail, but I think it’s actually key to flow. Adam Cuppy gave a talk called Mechanical Confidence at RubyConf 2018 and it was really eye-opening for me. He talked about a book called The Power of Habit, but he also had some observational data that asking interns to configure their desktop the same way for a week made them feel more confident in knowing how to find answers. You should go watch the recording, but if you don’t just think about this: short-term memory is in a different part of your brain than routine/habit, and we can leverage that. (also the video has a cameo by Emily Freeman).

I was thinking about this talk when I organized all my tools so that they are in the same location all the time, instead of just letting them randomly fall wherever they happened to get slotted into my inventory. And Adam is right. I feel more confident in combat if I know exactly how many clicks I am away from the weapon I want.

The other thing I’ve been doing a ton of on this vacation is jigsaw puzzles. I realized the connection between my two downtime obsessions is that I got excellent flow from them with small but reliable dopamine hits/rewards. I need rewards, and I love flow, but detatching it from work has been an interesting way to untangle how much of my self I use as a work identity, and what I enjoy in the absence of work-feedback. 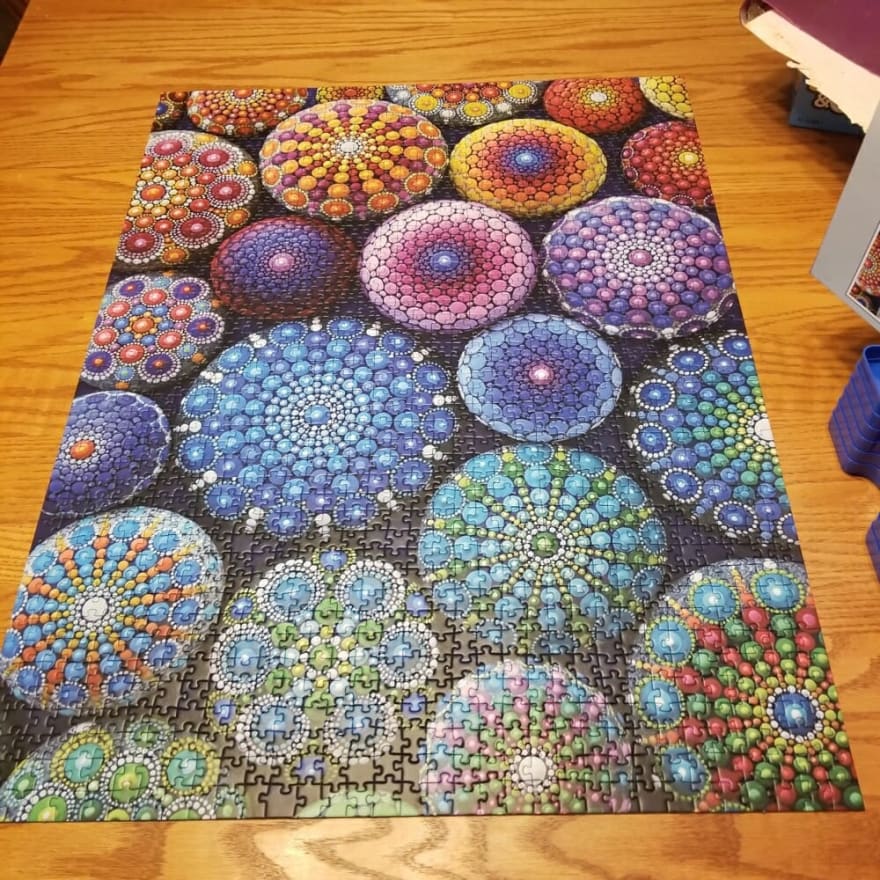 This one was pretty fiendish, but it was the first one I did, and I was pretty burnt out. 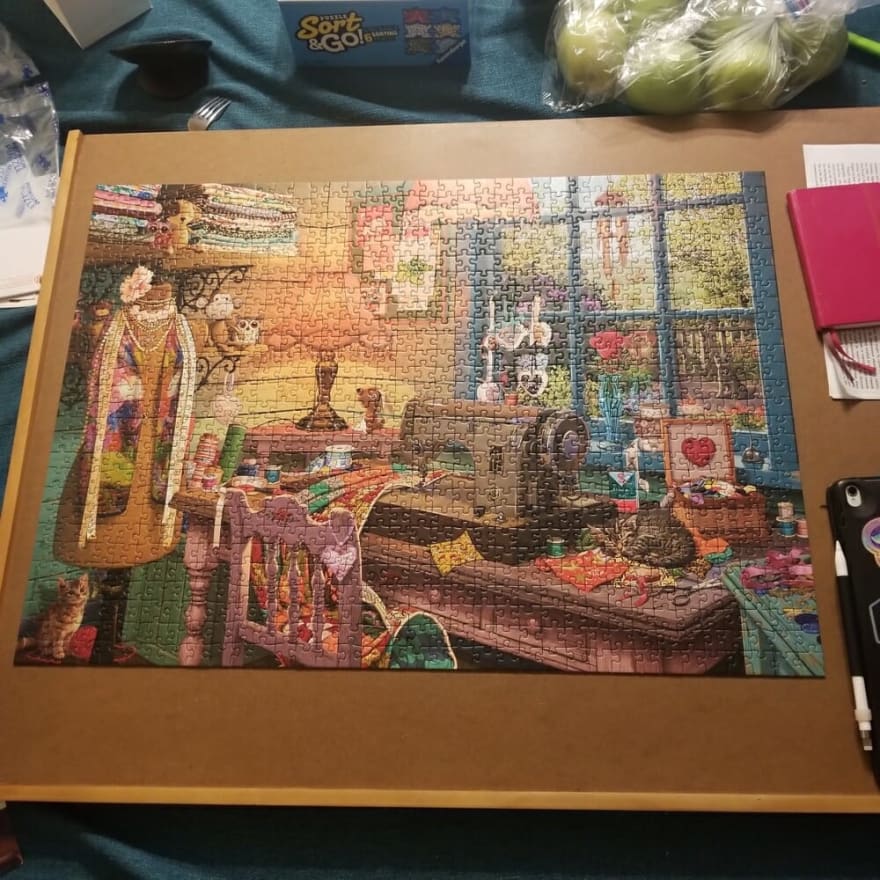 I enjoyed this puzzle, but spent a lot of time wanting to buy the crafter better light bulbs

My son informs me that the genres of Stardew Valley are “farming simulator” (hah!) and “Skinner Box game”, which is a different kind of hah, a hah of recognition. Because yes, I, like a pigeon, feel rewarded by tapping in the correct place at the correct time. I crave that feeling of competence/excellence/correctness. But because it’s a video game that I am in control of, it’s more like internal validation/motivation than external. I can only do so much about how a talk or a post is received by the world, because it depends on other humans, but this? Purely me and the gamecode.

I remember things by location or orientation. You know that feeling when you walk into a room and you can’t remember what you’re doing there? This is like the opposite of that, in that I have a little arrow pointing in a direction of the thing I was thinking about doing. In Stardew Valley, that’s actually a skill you can get, so that there are literally arrows pointing to things you can pick up for money. 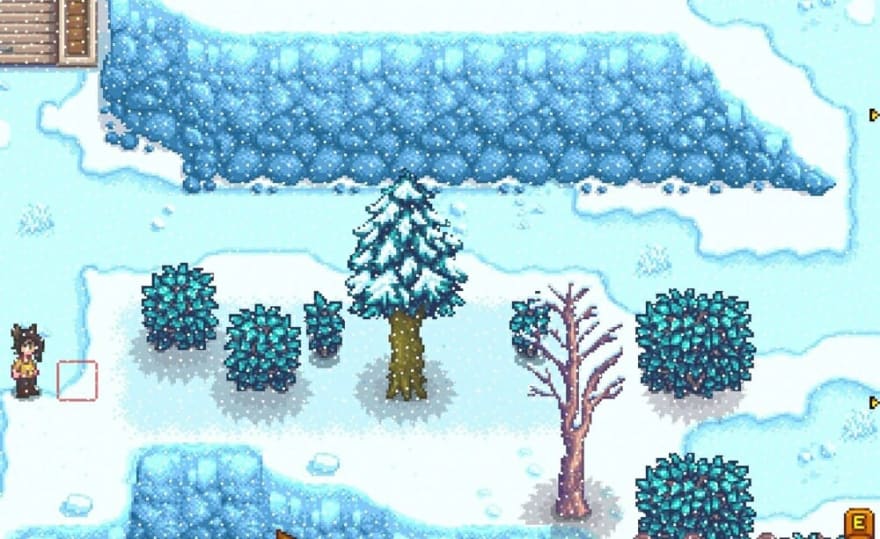 This is not my screencap, because I haven’t bothered to figure that out yet, but it’s representative.

See those little yellow arrows to the right of the screen? Good stuff that direction, an unknown distance and maybe not accessible, but it’s there. That’s literally how my life looks inside my head, but also it applies to browser tabs and mental maps of the place I actually live.

In another video game/real life crossover, I explain that my distractible-type ADD manifests as little Sims-like task bubbles hovering over all the household chores that need to be done, and I can’t ever dismiss them, so please, kid, do your chore so I stop thinking about it every time I walk into the room.

I can totally leverage this, too, the little arrow of intent. I just need to point it at the things that need doing, not the ones that are distracting.

There are four kinds of “tasks” that I think of spending my day on in Stardew Valley, once my chores are done.

It doesn’t matter which one I did yesterday, it is easiest for me to do it again today. Even if it would be advantageous to do one of the others, it takes a conscious effort of will to switch tracks from, say, mining to fishing. And it’s always hard for me to stop farming long enough to go to any of the other three. Not because it’s more enjoyable, but because it’s what I’m doing now and therefore has the lowest cognitive cost, and also, all the farm chores are very similar to farming.

I think this is about the cognitive cost of task switching and also the slightly increased effort of swapping out some tools for other tools. Sometimes I solve this by inefficiently carrying all the tools around, in case I need them, which sure is a metaphor for programming.

One of the interesting things I noticed after I unlocked a minecart system that gave me access to destinations is that I would keep getting this oldies song “Bus Stop” stuck in my head, followed by “Umbrella“. You know, the one sung by Rihanna and slain by Tom Holland. I finally figured out that merely reading the words “Bus Stop” was enough to set off this memetic trigger. EVERY TIME. Also when I picked up driftwood (What’s brown and sticky? A stick!), and when my fences rotted (Home Burial, by Robert Frost — “Three foggy mornings and one rainy day/Will rot the best birch fence a man can build.”)

It makes me aware of how everything in my head is stored and filed by keywords, but I don’t actually have access to clear up the index tags or make sure that they are being accessed relevantly. We can’t really refactor our unconscious associations, more’s the pity.

It is useful to me to take something I’m intimate with and get some perspective on it. That’s why I did a talk about dog training and people motivation. Somehow if we can get enough distance from something, the patterns become more apparent. What I learned from Stardew Valley and some time off work is that I crave flow as relaxing, that I need to budget extra time and energy to shifting tasks and modes, that making my work environment predictable helps me, and that my quirky ADD brain is working on workarounds I hadn’t even noticed.

I attended a full-stack SE boot camp. I'm glad I did. Here are a few things I wish I understood Day 1.

Methods in Methods and Parameters

Heidi Waterhouse
Heidi is a developer advocate at LaunchDarkly. She is passionate about clear communication, humane workplaces, and conference speaking. In her spare time, she sews dresses with pockets.
In which I am cranky about the urban/rural divide
#bestpractices #industry #life #personal
Extremely Online People
#devadvocacy #industry #life #uncategorized
The University of YouTube
#life #speakerresource #speaking #teaching

Thanks for keeping DEV Community 👩‍💻👨‍💻 safe. Here is what you can do to flag wiredferret: