Everyone is live streaming!

Well, ok, not everyone, but a lot of meetups & conferences which were previously only offline and IRL have an online presence these days. It really lowers the boundary of attending these events, and I think this is great!

ServerlessDays Amsterdam (which I’m co-organizing) is also moving online for both the meetups and the conference. In this post, I’m highlighting some details on how we’re setting this up.

I was already using StreamLabs OBS (SLOBS) and regular OBS for my vlog. I like the level of control these tools offer, and yes, that comes with a steeper learning curve compared to using online conferencing tools like Zoom/Jitsi.

A lot of things have been written recently on how to set up a live streaming/recording system with OBS. So I’m just going to refer to the blogs which I’ve read and highly recommend:

Special thanks goes out to Cloud Advocate Henk Boelman, who gave me detailed advice of using a virtual machine (VM) in Azure in combination with Skype, NDI Tools, and OBS. It works like a charm! <3

Having a dedicated VM in the cloud for streaming has quite some benefits over using my local laptop:

Are there downsides to using a VM? Yes, sure, the most obvious one is the price. You have to pay for a VM. The larger the VM, the more you pay. I’m lucky that I have Azure credits, thanks to being an Azure MVP. But even if I didn’t have these credits, I would still do it. This VM is only used for a couple of hours each month. So I’m never paying the full month price, just a fraction of it.

For Serverless Amsterdam I ended up provisioning a GPU enabled virtual machine (Win 10 OS) on Azure, size Standard NV6, with the following specs:

What I didn’t realize initially is that the VM has no preinstalled drivers to actually use the GPU. So make sure to install the NVIDIA GPU drivers. I did that by installing the NVIDIA GPU Driver Extension though the Extensions blade in the Azure Portal: 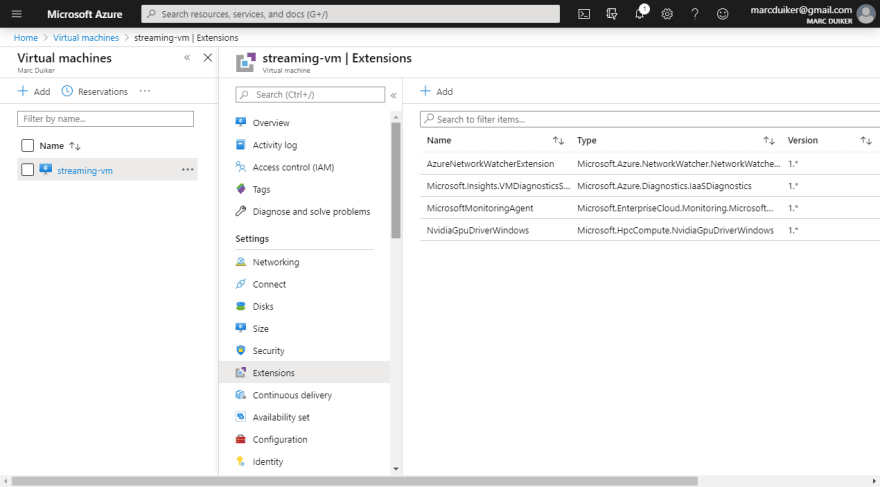 Now we can use the hardware encoding (NVENC) in OBS: 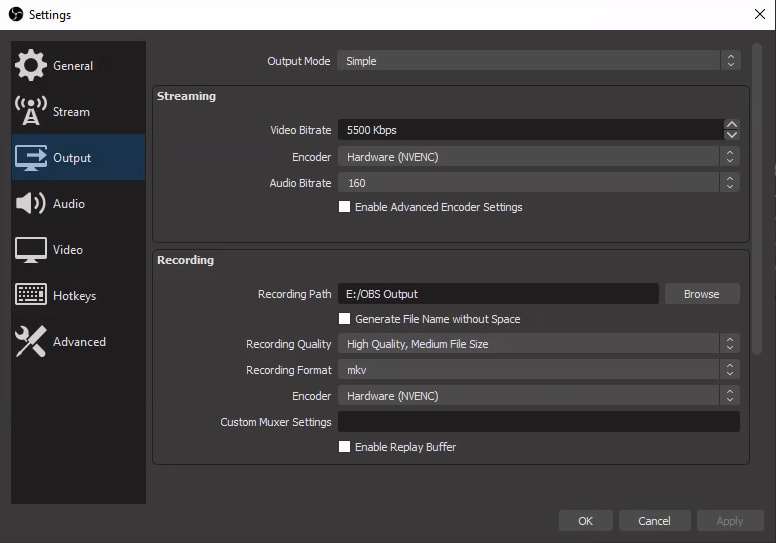 I purchased an Elgato Stream Deck so I can easily switch between scenes in OBS and set timers. I really like this small piece of hardware since it’s very customizable. 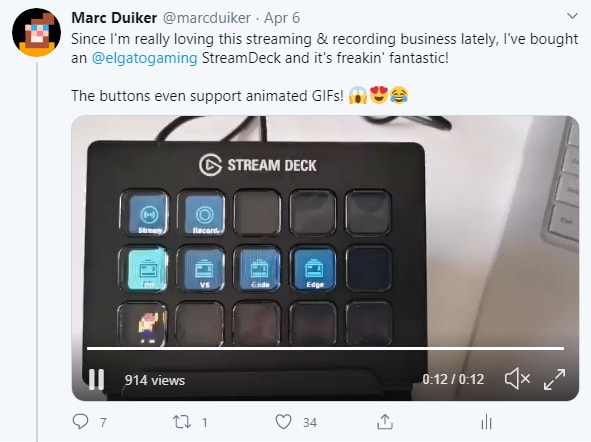 The Stream Deck can be used OOTB when OBS is running locally but I’d also want to use this device in OBS running in the VM. However local USB devices are not connected by default when a remote desktop session is used. Lucky we can use a technique called RemoteFX USB redirection which is enabled by changing two group policies, one for the local machine (client) and one for the remote VM (host). 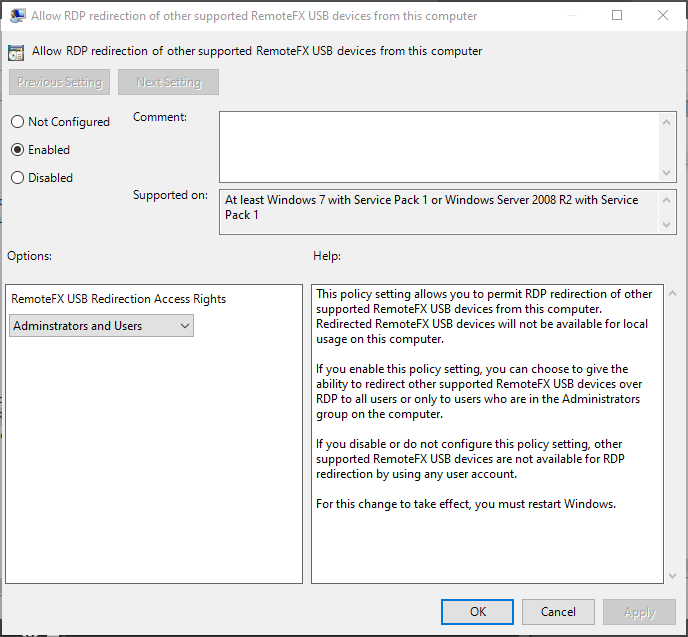 In a command prompt run: gpupdate /force to enfore the updated policy (a restart might be required as well).

In a command prompt run: gpupdate /force to enfore the updated policy (a restart might be required as well).

I might be stating the obvious, but the Stream Deck software/drivers also need to be installed on the VM.

Now a remote desktop connection can be started from the local machine, and the USB connections can be selected, which are redirected to the VM. 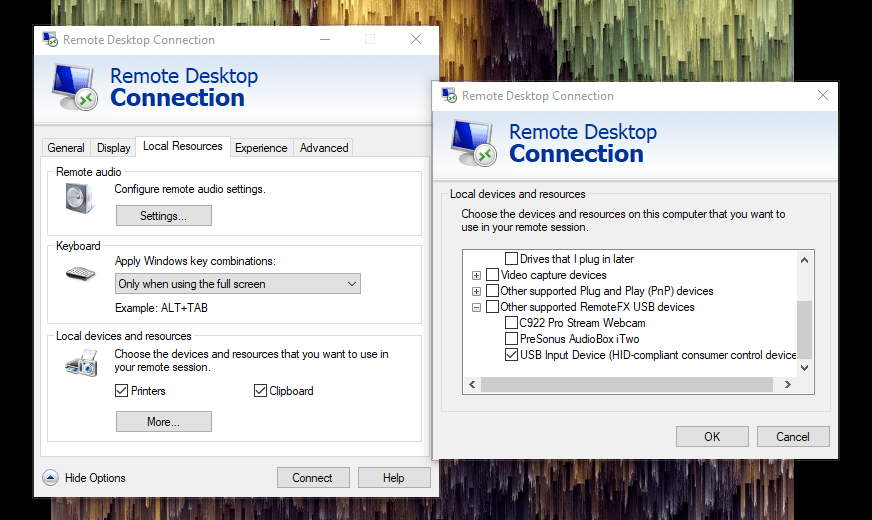 Now both hard and software are set up to use the Stream Deck on the remote VM. 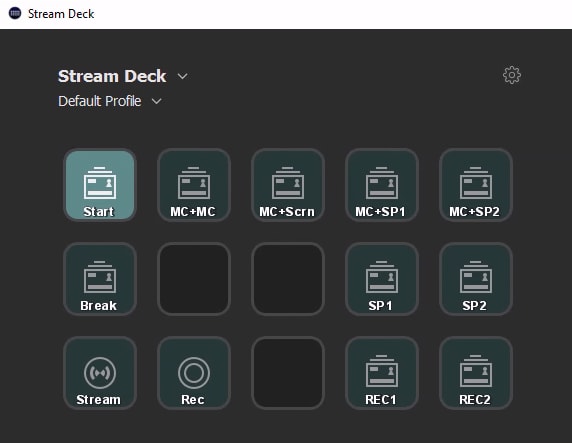 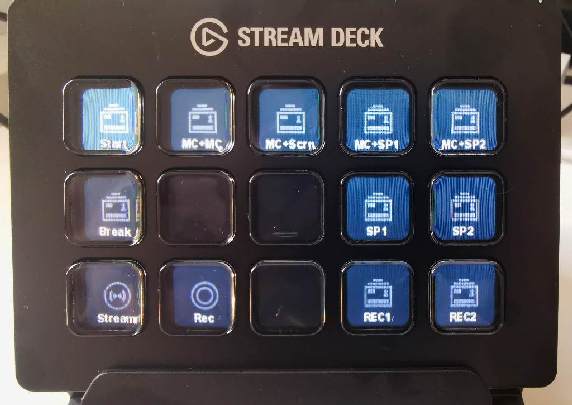 In the next part I’ll show more details about the OBS setup we’re using for ServerlessDays Amsterdam.

Once unpublished, this post will become invisible to the public and only accessible to Marc Duiker.