Recently, I was tasked with building a solution for OTA (Over-the-Air) updates for one of our products at SodaLabs. Now for those of you who are not familiar with the concept, here’s a definition by TechTarget:

Basically, the updates you receive for your Android, iOS, Windows, Mac or Linux devices are distributed through the mechanism known as OTA programming.

We had a couple of choices around how to build this OTA client, but in the end we decided to build it as a completely separate project. The reason was that both the main product and OTA client were equally complex solutions and we didn’t want to make it more complex by adding the OTA as part of the main project.

The OTA would essentially be just a service that runs as a background process and communicates with the main application (the product whose updates this OTA was supposed to manage) via AIDL i.e. the IPC mechanism used by Android.

This was the first time I was going to be working with IPC in general. So unsurprisingly, there was a lot of frustration, learning and fixing through trial and error involved.

My goal in this post is to write about the basics and share some insights from my experience so that you can avoid the confusions that I had to face.

How IPC Works In Android

All the applications in Android runs in its own process in a sandbox environment. Which means that each application is independent of others. This isolation helps improve the performance of the overall system and in achieving better security through different levels of permissions and access privileges.

Android has its own version of IDL called Android Interface Definition Language (AIDL), which has very much a Java-esque syntax. You basically start by defining an interface (or multiple based on your use case) and then implement the interface in your application and in the client application that wishes to communicate our app.

One important thing to understand is that IPC communication in Android is also client-server based. Which means that one application has to act as the server while others can interact with it using the interface it exposes.

Generally, that Server application is the one you are writing and which you wish to be controlled from outside sources. Following are the components and steps involved:

These are the 5 main steps required to implement the IPC capabilities in an application. However, admittedly they are not simple and bound to give you a lot of trouble. Let’s look at the implementation now.

Off To The Code

Let’s build a very basic application that let’s you perform addition. To demonstrate the use of data exchange with both primitives and objects, instead of returning a simple integer value for result, we will return a made-up Result object.

Start by creating a simple project with two modules, one serving as a Client while the other as the Server. You can find the link to the complete code at the end of post.

Now that you have a basic setup, let’s first define our very simple AIDL interface in which we want to expose a single method called performAddition which takes 2 integer values and returns a made-up Result object.

Now as I mentioned above, since we are using a custom object, we need to define a simple AIDL implementation for it as well.

Build the project and if no errors occur, then you should be able to find a java implementation of of your AIDL interface.

Once successful, make sure to copy both of your AIDL files to the client project as well.

Implementation Of The AIDL Interface

Next step is to provide concrete implementation of the AIDL interfaces. For the Result object, all you need is a parcelable POJO for it. However! You need to write it the old school java way.

I know you love Kotlin and must be thinking of using parcelize or at least take advantage of the simpler Kotlin code for data classes, but for some reason Kotlin based parcelables don’t work at the time of this writing.

So here’s your implementation for Result class in pure java style:

Make sure to copy this class into client’s source code as well since it is needed by client to interpret the Result AIDL interface.

Anyways, let’s now provide the implementation for our IAddition AIDL interface in the server application:

While we are at it, let’s also register this service in our manifest file. With that our server application will be ready:

Hooking The Service To The Client

Last step is to bind the AdditionService in the server application to the client app and starting it remotely. I have a very basic activity with the following UI for client app: 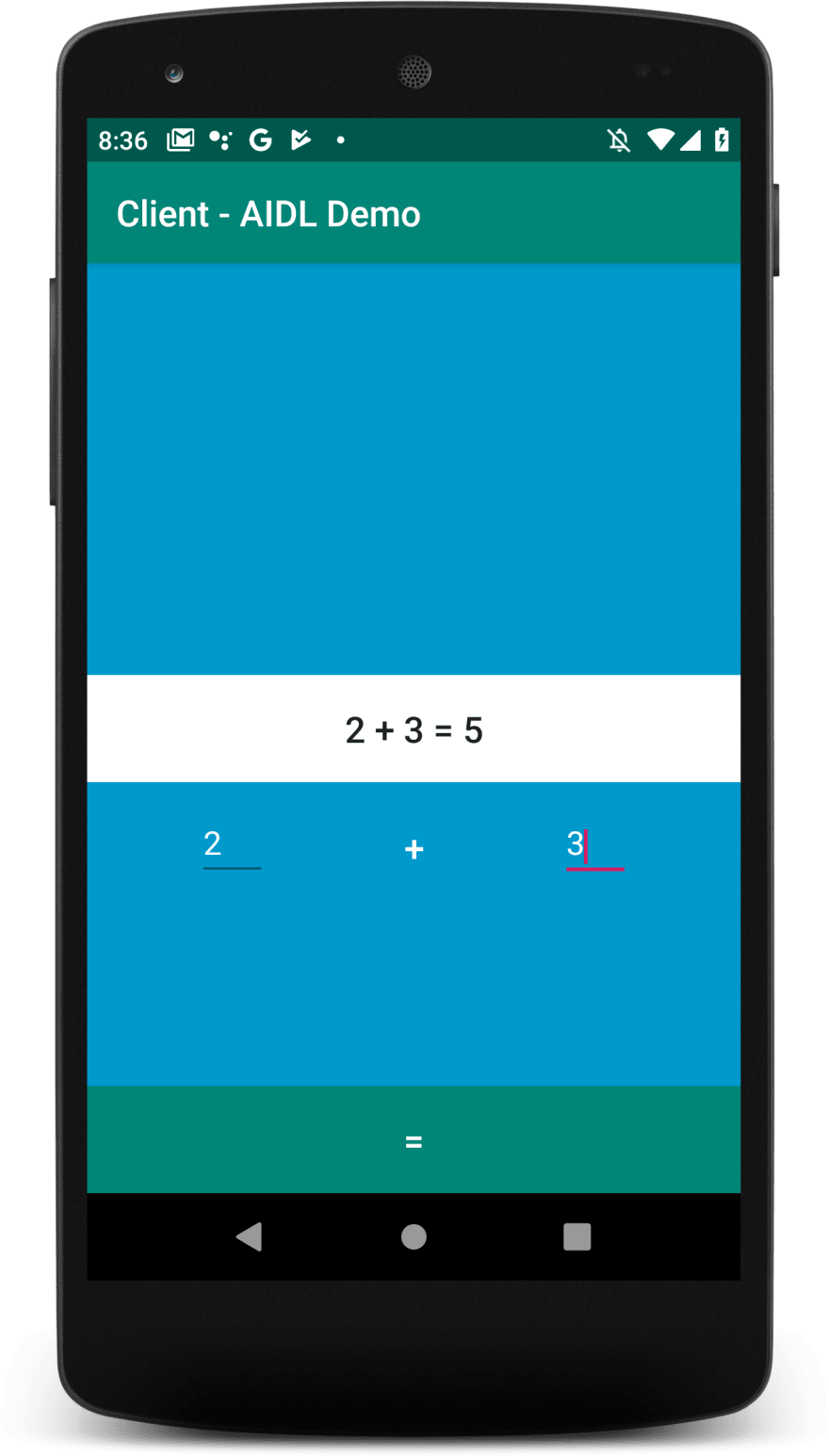 If all goes well, you should be able to compute your additions through the server app using AIDL interfaces.

In the end, as you may have realized that this mechanism is not very robust and prone to error. So here are few tips from what I learnt working with Android’s IPC about the things that could easily go wrong and make you waste a lot of time.

You can find complete source code for this post here

Once suspended, xuhaibahmad will not be able to comment or publish posts until their suspension is removed.

Once unsuspended, xuhaibahmad will be able to comment and publish posts again.

Once unpublished, all posts by xuhaibahmad will become hidden and only accessible to themselves.

If xuhaibahmad is not suspended, they can still re-publish their posts from their dashboard.

Once unpublished, this post will become invisible to the public and only accessible to Zuhaib Ahmad.

Thanks for keeping DEV Community 👩‍💻👨‍💻 safe. Here is what you can do to flag xuhaibahmad:

Unflagging xuhaibahmad will restore default visibility to their posts.