It's been over a year since the initial release of FlowBinding.

Over the last year we've added 4 new artifacts for AndroidX libraries, dropped our minimum SDK all the way back to API 14, introduced a new InitialValueFlow API for widgets that emit state changes, and new API docs.

While the majority of the APIs have remained the same since the first public release (original blogpost) last year, we've made a decent amount of improvements to the library over the last 14 months.

Our focus has been on providing bindings for flowbinding-material which is where most of the new UI widgets are being developed, but we also added 4 new artifacts for AndroidX libraries:

Originally the minSdkVersion FlowBinding required was API 21. While this is reasonable for most users, support for lower API levels remains essential for users who are developing for emerging markets (see this tweet for more context).

For UI widgets that hold a state internally such as the current value of a Slider (a recently added Material Component), our bindings used to provide an optional emitImmediately: Boolean to indicate whether the current value should be emitted immediately when collected:

The default value of emitImmediately was false which not everyone agrees.

After discussions within the community we've decided to introduce a new InitialValueFlow for the bindings that emit state changes (many thanks to Sven Jacobs for the idea).

An InitialValueFlow emits the current value (state) of the widget immediately upon collection of the Flow.

This effectively changed the previous default value of emitImmediately from false to true, but communicates the behavior more clearly in the type itself.

To skip the initial emission of the current value, call the skipInitialValue() function on the InitialValueFlow:

FlowBinding has many artifacts and APIs. We now have a new project website that documents all transitive AndroidX dependencies and the bindings available in each artifact, along with new API docs powered by Dokka 1.4. 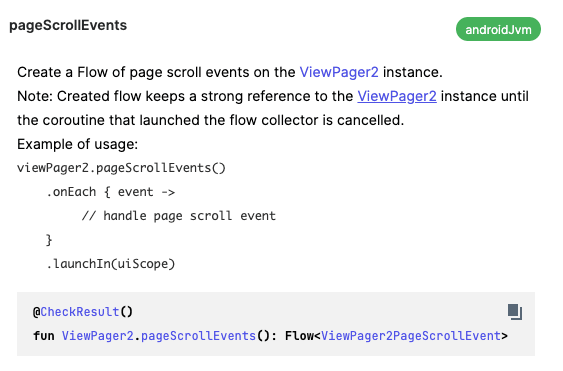 Jetpack Compose is clearly the future of UI development for Android, while FlowBinding specifically targets the current generation of UI toolkits, which isn't going away anytime soon. The material-components-android library is still being actively developed with many new view-based components being added or planned.

Therefore we're planning to continue the work on maintaining AndroidX bindings and adding bindings for the new Material Design Components (e.g. TimePicker) as they become available.

I'd like to thank everyone who has used FlowBinding, reported bugs, made feature requests, participated in discussions or sent PRs in the last 14 months, which all contributed to what we've achieved with the library today!

Once suspended, ychescale9 will not be able to comment or publish posts until their suspension is removed.

Once unsuspended, ychescale9 will be able to comment and publish posts again.

Once unpublished, all posts by ychescale9 will become hidden and only accessible to themselves.

If ychescale9 is not suspended, they can still re-publish their posts from their dashboard.

Once unpublished, this post will become invisible to the public and only accessible to Yang.

Thanks for keeping DEV Community 👩‍💻👨‍💻 safe. Here is what you can do to flag ychescale9:

Unflagging ychescale9 will restore default visibility to their posts.