We developed a tool "KurumiPy" that can easily adapt memoization in Python, and released it to GitHub as OSS.

Kurumipy can also use the cache when you run the program again.

In computing, memoization or memoisation is an optimization technique used primarily to speed up computer programs by storing the results of expensive function calls and returning the cached result when the same inputs occur again.

In a function, it is inefficient to repeat the process that has the same return value for the same input data (argument value) many times.

Therefore, cache (save) the result of the first function processing.For the second and subsequent times, the program does not process within that function and returns the cached data as it is.

This makes it possible to omit to repeat the same process many times, so the processing speeds up correspondingly.

Why did you make KurumiPy?

If you are developing a system that is not heavy processing, the need for memoization is low.

Recently, however, it is often said that AI and data analysis. With the current trend, the use of Python to handle large amounts of data is increasing.

For example, as shown in the figure below, there is a system that processes a number of data with large amounts of sensor data as input. 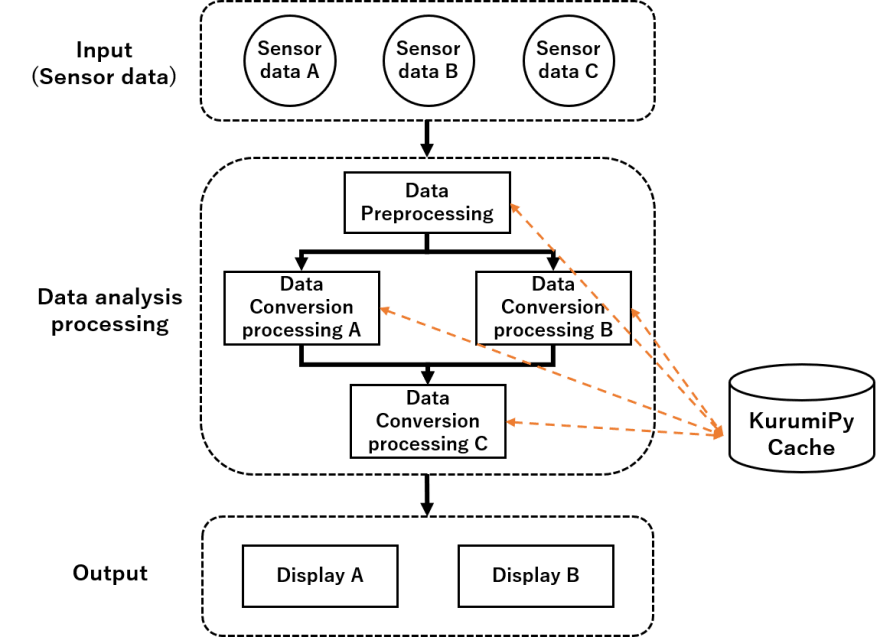 In such a case, if you change the program a little, try to see the output result by executing the program, the function with the data conversion processing which has not rewritten the program is executed again.

In such a case, by reusing the data cached by memoization, processing before "Data Conversion processing C" can be omitted and the output result can be output quickly .

In the case of a small amount of data, there may be no need to do so, but it is worthwhile if the input data becomes more than a few Mbytes.

I was developing a certain system, but in that system it took over 40 seconds to process the data and output the result.

However, by applying memoization in KurumiPy, it took less than 1 second to output the result.

When developing a system that performs data analysis processing by trial and error, it sometimes sometimes wants to change the value of the variable a bit and re-execute to see the result.

In such a case, if it takes many seconds each time to output the result, it will be great stress.

At that time, KurumiPy is playing an active part.

If you optimize using DB (database) well, you do not have to do the same process many times.

Then, you will not need a memoization tool.

However, when preparing the hypothesis verification phase or prototype, it is troublesome to prepare the DB.

Even if you use DB, it may be difficult to optimize well.

At that time, I want a memoization.

Supported versions of Python are 3.x.

Copy 'memoization' folder to your project, then import the module. Write a decorator to functions to enable memoization.

You can apply memoization by this alone.

Cache files will be stored in the folder following.

Functions should meet the restrictions following.

Python 3.3 enables "salt" on hash of str, bytes and datetime objects by default.

You need to disable it before running Python programs.

Why is it called "KurumiPy"?

Kurumi stands for walnut in Japanese.

For this reason, we have named "Kurumi" because it matches memoization.

Powerlifting has made me a better developer. (Part 1: Interpersonally)

The dev.to project with GatsbyJS-3