PowerShell(pwsh) is a CLI tool to run programs on Windows.

This article is originally PowerShell(pwsh) Tutorial for Perl | Perl ABC

PowerShell(pwsh) can be downloaded from the following page.

And double-click the downloaded file. The installer is executed. 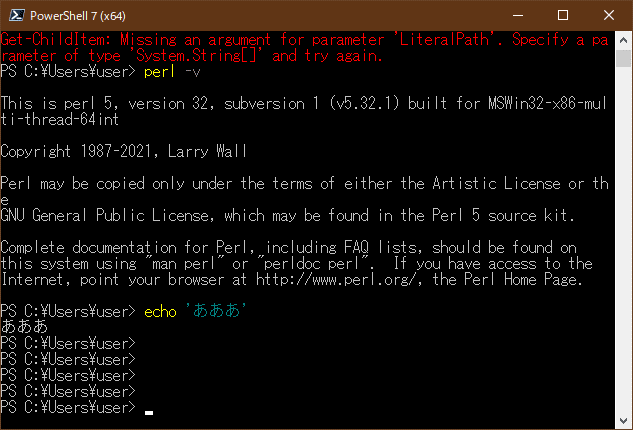 Your home directory is shown on PowerShell/pwsh.

The extension of Perl program is ".pl". It is useful if extensions of files are displayed.

The way to show file extensions is described in the following page.

The way to use Notepad is described in the following page.

11 ways to start Notepad in Windows

Create a file named "start.pl" at your home directory.

And write the following text.

You can run your Perl program using perl command.

".." is the file name that means the folder one level higher.

You can get and show an environment variable as the following.

You can set an environment variable as the following.

5 Reasons to Use Ubuntu Instead of Windows

(English) PowerGrafana, what is it and how to use it

Once suspended, yukikimoto will not be able to comment or publish posts until their suspension is removed.

Once unsuspended, yukikimoto will be able to comment and publish posts again.

Once unpublished, all posts by yukikimoto will become hidden and only accessible to themselves.

If yukikimoto is not suspended, they can still re-publish their posts from their dashboard.