(You want to read this post in Korean? Check out here!)

In my last post, I learned about what the Internet is. After that, the next question came up to my mind was “how does it work?”. I thought this simple question should have a very simple and straightforward answer. Yet the more I researched, the more I felt that the question needs to be broken down further. So I did.

My first sub-question was “what basic physical facilities (infrastructure) are needed for the Internet to send and receive information?”.

Part 2: What is the infrastructure that the Internet needs to operate?

To answer this question, I would like to first explain briefly what is the information that the Internet is sending and receiving among different entities. Information in this context is in binary form – it consists of a bunch of 1s or 0s, which we call ‘bit’ for each individual 1 or 0. Bits are the atoms of the information.

As we know the Internet is a network of computer connected at a global scale, we can modify the above-mentioned question to be:
“what basic physical facilities (infrastructure) are needed for computers to send and receive these bits?”.

Throughout history, different physical mediums were used to send and receive these bits between computers. But nowadays, we are mainly using three mediums.

Let’s visit each medium to understand how it transfers the bits at a high level, the pros and the cons.

First, how does electricity can be used to represent the bits?

It is pretty simple – the operators in transmitting these bits agreed that when there is voltage, it represents 1 and when there is no voltage, the state represents 0. Upon this agreement, the sender can represent ‘1010’ and send it to the other side. But how can we represent bits which consist of consecutive 1s and 0s? Like 10000? How can the receiver count the number of zeros?

For those scenarios, we need a concept of ‘timer’. Operators agree to send a certain number of bits per the given amount of time (usually in a second). Then, the receiver can calculate how many 1s or 0s one received based on this agreement. As an example, let’s say two operators agreed to send a bit per second. They also agreed to represent 1 as 5v, and 0 as 0v. In this scenario, if the sender sends 0v for 5 seconds, the receiver knows marks ‘00000’ on his/her end. The number of bits that are processed per unit of time is called ‘bit rate’.

Now, the second question is what is used to transmit this electricity to send bits?

Here, a copper wire is usually used. The ethernet cable we see at our home, work, and school is made of strands of copper wire. The main reason that we use copper wires for connecting computers is because of its affordable price. 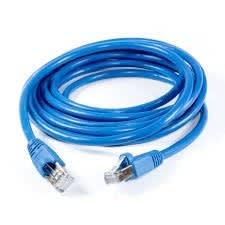 However, copper wire is not good for sending signals for a really long distance, because the electrical resistance of a long cable affects performance. As such, there is an upper limit on how long the ether cable can be. Therefore, we see the ether cable for the local network.

But what if we want to send data from one continent to the other continent? If electricity is an inefficient way to transmit information over long distances, what’s our alternative? What’s the one thing that travels so fast without the signal loss? Light!

We can send bits through the light beam. How we use the light beam to represent 1 or 0 is very similar to how we do so with electricity. When light is off, it means 0. When light is on, it means 1. To send the light beam, we need to use a special cable, called ‘fiber optic’. Fiber optic cable is a specially engineered cable that is made of a thread of glass to reflect light. When the light is sent down the cable, the light is bounce off the walls of the cable and reaches the other end without leaking out at the edges. As such, signals travel farther without signal loss. 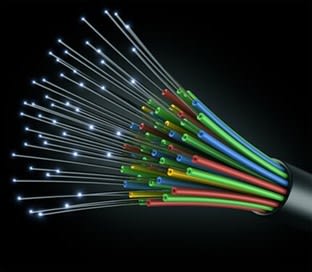 For these advantages, fiber optic cables are used to connect the networks across countries. These cables are under the ocean and go across hundreds of miles to connect the continents. Though it seems sending data from one continent to the other magically handled, there are actually physical wires that make the Internet communication possible. 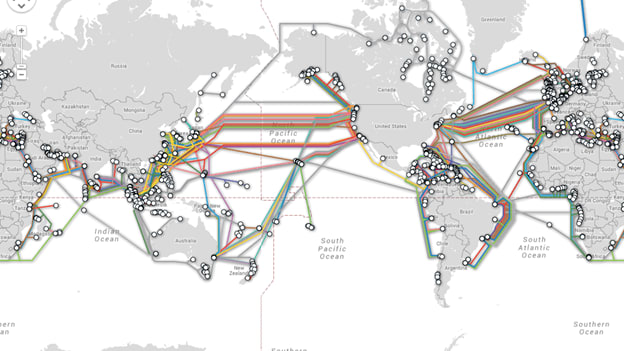 (The map of the submarine cables connecting the world. (Image Ref)) 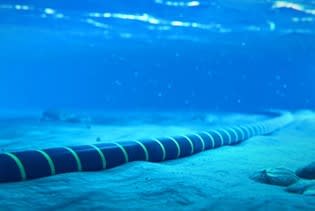 Until so far, we have covered two different ways of exchanging data between two entities through physical wires. But we all know there is a way to communicate without wires; using Wi-Fi and cellphone signal. Then how do these Wi-Fi & Cell phone signal work to exchange the data?

To send the bits wirelessly, we use radio waves as they have ideal properties such as they can be easily transmitted through air, and they do not cause damage on the human body if they are absorbed. When a device sends bits to the other device wirelessly, the sending device needs to translate the bits into radio waves in different frequencies. When the receiving device receives those waves, it needs to reverse the process by translating the radio waves into bits (digital wave).

It is great that the radio waves can make the communication among devices mobile. Yet, radio signal is not the best fit for the worldwide communication as the signal cannot travel that far. So, when we communicate through wi-fi in our daily life, we are not 100% relying on the wireless communication. We are actually using both wireless and wired internet.

Let’s think about a time when you were in a coffee shop using its wifi. When you are accessing a website, you are sending bits via radio waves to a router located in the shop. This router is a device that accepts the radio signals and translates them into bits again and sends them to other devices via the ethernet cables. If your bits need to be sent through over the ocean, now you know what cables are used to send those bits; fiber optics 😊

Until so far, we covered the physical infrastructure needed for the Internet to operate.

For the next post, I will share how the Internet reliably sends and receive information for each sender and receiver. I will talk about the standardized rules (protocols) between the sender and the receiver of data to communicate via the internet and how those rules work.

Once suspended, yunicorn will not be able to comment or publish posts until their suspension is removed.

Once unsuspended, yunicorn will be able to comment and publish posts again.

Once unpublished, all posts by yunicorn will become hidden and only accessible to themselves.

If yunicorn is not suspended, they can still re-publish their posts from their dashboard.

Once unpublished, this post will become invisible to the public and only accessible to yunicorn.log.

Thanks for keeping DEV Community 👩‍💻👨‍💻 safe. Here is what you can do to flag yunicorn:

Unflagging yunicorn will restore default visibility to their posts.