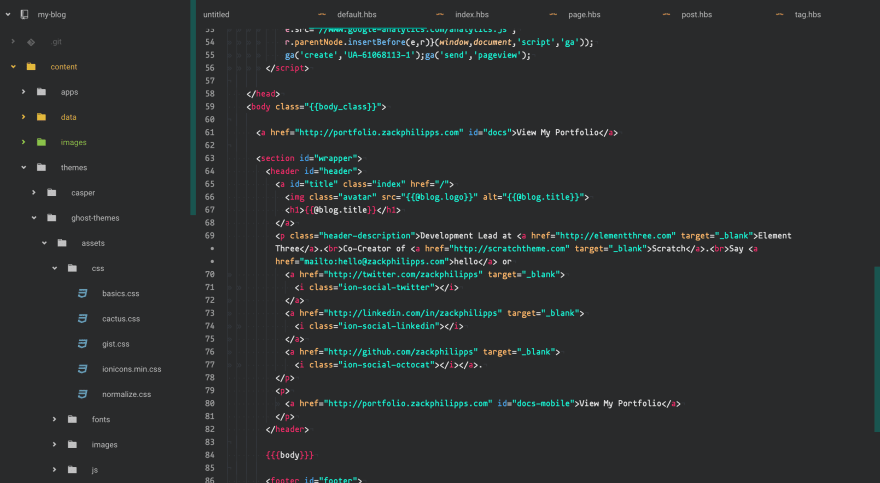 When I first discovered Sublime Text, I fell in love with its configurability and the availability of packages to extend its features. When Atom first came out, I tried it for a little bit, but quickly became frustrated because there were still some kinks that needed resolved.

Fast forward about 2 years to when I start my new job at Element Three. The whole dev team is using Atom, so I figure I'll give it another shot.

There was definitely an adjustment period. But, after a few weeks, I realized that Atom did everything Sublime did, except better! And more!

Right off the bat Atom comes with default packages, which you can disable. I immediately disabled the wrap-guide package because I couldn't take the line running through my code, and I don't ascribe to the 80-character preference. But this in itself is an improvement over Sublime. Here are some more.

In fact, most of what I had to adjust to with Atom was keybindings. I had a few custom ones set up in Sublime that I struggled with in Atom. This is because I was adding them incorrectly. (They're case sensitive.)

As mentioned in A Front End Developer's Sublime Text Setup, I had been used to using shift-cmd-d to delete lines and alt-cmd-d to duplicate lines. Well, I added my keybindings like so:

Delete line worked, but not duplicate line. It's because Atom was expecting me to type alt-cmd-shift-D because I had entered it as a capital D. This is the correct way:

The other big thing to get used to was the behavior of the tab key. In Sublime, you could use tab (much like a terminal) to expand snippets and use suggested autocompletions. In Atom, it seems like the return key is more reliable for autocomplete, while tab still works for snippets. Kinda weird.

^ that may just be because I am using Emmet, which in Sublime, allows tab to expand all of its abbreviations. I ended up adding another keybinding. Emmet's default keybinding is ctrl+e to expand abbreviations; I changed it to cmd-e since I wasn't using it for anything else and it's more intuitive to my fingers.

Now, on to the fun stuff: packages! I was able to find a replacement for every package I loved in Sublime, and all of these either matched or surpassed their predecessors.

I was also able to create my first Atom package. Thanks to apm, it was incredibly easy to publish.

This replaced JavaScript Beautify and SassBeautify from my Sublime setup. As you can see, it handles a lot more languages than that.

I like this one because it makes Atom behave more like Ghost. I can press cmd-b to make my markdown text bold, cmd-k to insert a hyperlink, and so on.

"Linters?" Read about how code linting has changed my life.

🔥 🔥 My Favorite Packages on Atom editor for PHP Development

Once suspended, zackphilipps will not be able to comment or publish posts until their suspension is removed.

Once unsuspended, zackphilipps will be able to comment and publish posts again.

Once unpublished, all posts by zackphilipps will become hidden and only accessible to themselves.

If zackphilipps is not suspended, they can still re-publish their posts from their dashboard.

Once unpublished, this post will become invisible to the public and only accessible to Zack Philipps.

Thanks for keeping DEV Community 👩‍💻👨‍💻 safe. Here is what you can do to flag zackphilipps:

Unflagging zackphilipps will restore default visibility to their posts.