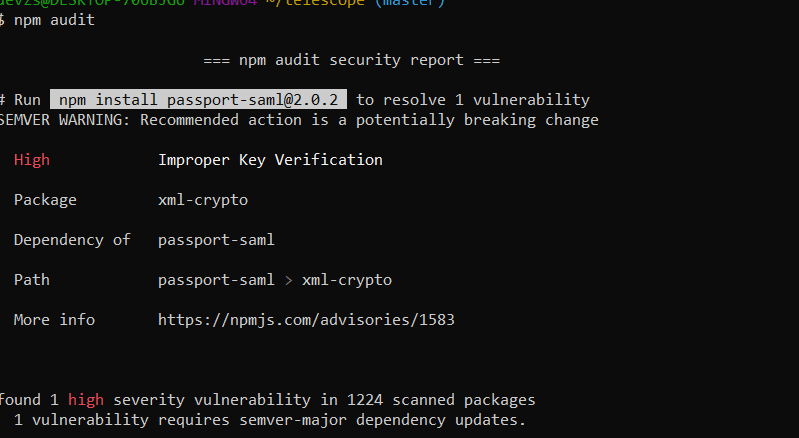 So, I was trying to run telescope locally and I ran it and it had a high severity vulnerability in one of the npm packages. The Package that was of issue was passport-saml. The issue was having an outdated version and it needed an update I ran the npm fix command and it was fixed. This could have been very bad as I did not know if this would break telescope local login. I ran the tests and It worked.

I still did not know that I needed to test the local login system and had no clue as to how to. I submitted a pull request. I received a great review letting me know to test this the local login in order to test whether or not this update broke anything. I read the docs and found how to login locally using passport-saml. run docker build and get the SAML2 server up and running. Then, I needed to start backend and frontend. Then login with the fake user data to test passport-saml and I was able to login confirming that the update did not break anything.

Overall, I learned I probably should not update packages I don't know about, before knowing how it is being used and what is causing the issue. This experience did let me gain a greater insight in the telescope workflows and overall was not to diffcult.

Can anyone suggest some interesting backend projects ??

Once suspended, zg3d will not be able to comment or publish posts until their suspension is removed.

Once unsuspended, zg3d will be able to comment and publish posts again.

Once unpublished, all posts by zg3d will become hidden and only accessible to themselves.

If zg3d is not suspended, they can still re-publish their posts from their dashboard.