Before accepting my current position, I had been networking with recruiters all over LinkedIn. After having hours worth of interactions, I decided I could shed some light on how recruiters could better interact with developers and achieve a higher success rate.

The same way recruiters are always looking for keywords, we developers are as well! Though they may recruit for multiple companies using multiple languages, recruiters often times have 2 or 3 companies in which they work closely with. Putting keywords in their Linkedin headlines can prove very helpful.

Having a basic understanding of the technology and what it does can also bridge the gap between both parties. For the recruiters reading, here is a basic run down:

Backend:
What the server executes. Java, C#, .Net, Ruby, Python, and many more. These languages will be used on the server side and will not be viewed by the customer.

SQL:
Anything pertaining to SQL will hold information inside a database such as all the bank accounts in a banks system, or all the students in a university.

Github:
Where we store all of our code so it doesn’t get lost.

Another way recruiting agencies could boost their placement percentages and have a higher success rate is to cultivate good partnerships with the interviewers who will be asking questions to candidates. As this partnership grows, eventually have the senior technical recruiter ask if they can sit in on interviews.

Recruiters are hired for their ability to sell candidates. If a candidate states their salary range of $100k - $120k, it's the recruiters job to get the candidate the $120k asking price. When sourcing potential candidates, focus on the candidates who are properly selling themselves on LinkedIn. Experience, extracurricular projects, articles and portfolio websites are all metrics you should use to gauge when cold messaging or filtering resumes. These four metrics can speak volumes as to how eager developers can be. Experience alone cannot replace eagerness. I've heard stories of senior developers walking out of interviews because they believed they were above some of the technical questions being asked of them in interviews. Candidates constantly showcasing their material on social media are the ones you should be focused on. Those candidates feel as though they need to prove themselves and will be attentive when you give them instructions to follow in order to secure a job offer.

Also, pay close attention to the stories of candidates and where they originate from. If you see a trend of students from UMASS Amherst getting job offers, or students from a specific Bootcamp being placed, it may be a good idea to reach out to the instructors of the institution in order to cultivate a relationship. This way, instead of prepping candidates 3 days before an interview, you'll have time to prep candidates 3 or 4 months ahead of their interviews. Look at this as an investment, you are investing in the candidate and your office’s growth.

One way you can prep future candidates is to have them set up portfolio sites. Portfolio sites are essential to showcasing one’s skill. These websites can even be created using a template in which the developer can modify with simple bootstrap knowledge that can be learned in a weekend. Themeforest and wrapbootstrap.com are two of the top websites when it comes to bootstrap portfolio templates. Next, have candidates write articles about CICD, source control, design patterns they are learning, or about some of the other keywords that you often see in resumes. Back in March, I went on an interview with a CEO of a company that I came across. After reading some of my articles and having a talk with him, he was kind enough to let me know that he had written this post with our interview in mind: 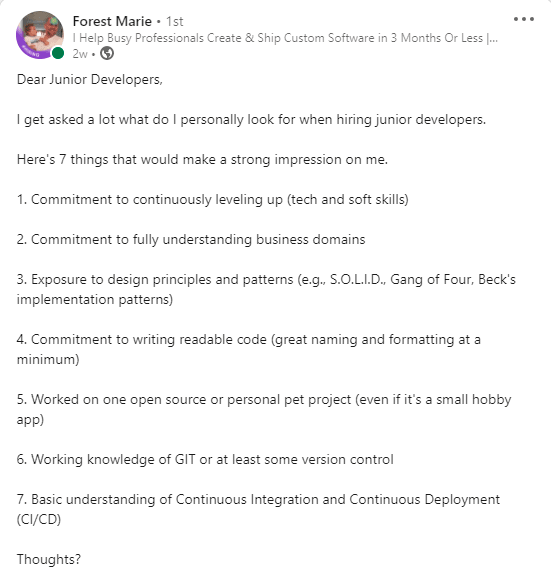 Encouraging your network of future candidates to write articles on their areas of expertise makes it easier for employers to quickly identify competence in the candidate's skillset. Have them publish their articles either here on dev.to or on a personal blog site they create. Also have them link their articles and projects on their resume aswell.

Below is an example of how I've linked my projects and articles onto my resume:
https://drive.google.com/file/d/1yR0VR0YP9vgsdqeRXfeKod4FiwiYE3_J/view

Apply to Jobs You Don’t Want

How to excel at take home coding challenge

Create your ENUM (yes from Java')

Zachary Hadjah
Software Engineer at Liberty IT Solutions
Adding more devs to your project makes it slower
#discuss
Music Monday — What are you listening to? (August 8)
#watercooler #discuss #music
How do you all create your resumes?
#discuss #beginners #resume #coverletter

Once suspended, zhadjah9559 will not be able to comment or publish posts until their suspension is removed.

Once unsuspended, zhadjah9559 will be able to comment and publish posts again.

Once unpublished, all posts by zhadjah9559 will become hidden and only accessible to themselves.

If zhadjah9559 is not suspended, they can still re-publish their posts from their dashboard.

Once unpublished, this post will become invisible to the public and only accessible to Zachary Hadjah.

Thanks for keeping DEV Community safe. Here is what you can do to flag zhadjah9559:

Unflagging zhadjah9559 will restore default visibility to their posts.