At ZingSoft, we're always on the lookout for new tools that can make our jobs easier, which also means that we've tried many, many different products and services. If I had to choose just one tool that's been the most transformative for my team's overall productivity in the past year, CloudApp would be one of my top two contenders for that title. Perhaps it's surprising to hear that a media-capture application could make such a big impact on a software development team, but the reality is that it has filled a gap we were unaware of – one we didn't realize was having such a big impact on our workflows.

As it turns out, there are many reasons why everyone from a software developer, to a graphic designer, to a QA tester might need to capture a screenshot, GIF, or video recording of what's happening on their computer screen. What's more, it's perfectly reasonable to expect someone in any of those team roles to want to annotate and share those recordings as well. Enter CloudApp, a cloud-based media recording application that not only includes all of the aforementioned functionality, but which also stores all recorded media in the cloud (are you noticing a theme here?) for later access and retrieval from any desktop. Here's what a CloudApp capture looks like: 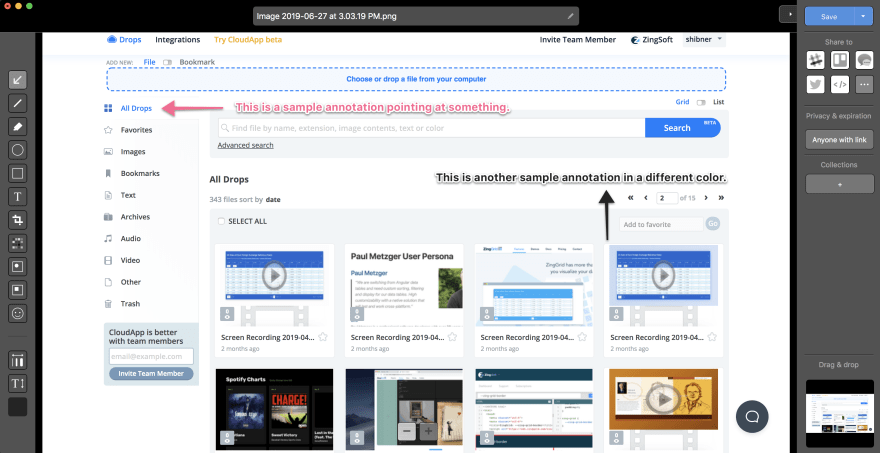 On the surface, the functionality that CloudApp provides may seem easy to de-emphasize. After all, it's simple enough to take screenshots natively, and many basic image viewing applications nowadays have some form of basic annotative abilities. However, CloudApp differentiated itself with my team by making the process of capturing, annotating, and sharing motion graphics and video as easy as it is with static screenshots. Additionally, its non-invasive UX means that the app is there when we need it, but nearly invisible when we don't. This combination of thoughtful functionality and minimal presence is what ultimately made it so easy for my teammates to integrate it into their various workflows, regardless of their role.

The use cases in which we've found ourselves using CloudApp are many. They run the gamut from capturing bugs in the JavaScript libraries we build, to recording weird behavior in our various websites and apps, to visually bookmarking inspirational things we come across on the web, to creating content for our marketing materials (like the screenshots in this blog post). However, beyond its many use cases, CloudApp's sharing options are what have also made it invaluable to us. We can share a single piece of media directly by dragging and dropping the file, or via various cloud-based link sharing options (e.g. direct link, download link, embed code, etc). We can also share our recorded media directly to various platforms like Slack, Trello, Twitter, etc. from CloudApp's interface.

At a higher level, CloudApp has made it easier for my team to visually communicate the value of our ZingGrid and ZingChart data visualization products to existing and potential customers. Our two JavaScript libraries are predominantly presentational, and having a tool that makes it so easy to visually convey what our products can do has been transformative and time-saving. Producing content like product tutorials, email campaigns, bug reports/stories, and internal status presentations have become easier than ever thanks to the help that CloudApp provides.

If you could automate one process what would you automate?

Want to give ZingGrid a try? Sign up for an account to edit and save your ZingGrid demos in our online app.

Once suspended, zinggrid will not be able to comment or publish posts until their suspension is removed.

Once unsuspended, zinggrid will be able to comment and publish posts again.

Once unpublished, all posts by zinggrid will become hidden and only accessible to themselves.

If zinggrid is not suspended, they can still re-publish their posts from their dashboard.

Once unpublished, this post will become invisible to the public and only accessible to Hibs.

Thanks for keeping DEV Community 👩‍💻👨‍💻 safe. Here is what you can do to flag zinggrid:

Unflagging zinggrid will restore default visibility to their posts.