Last year, the crypto job market felt different, but overall it was a good different.

2019 was characterized by a volatile cryptocurrency market, a succession of high-profile layoffs, but also the creation of new blockchain jobs, the growth of Decentralized Finance, and increased awareness of Bitcoin.

There were high-profile layoffs at cryptocurrency companies that began at the end of 2018 and continued throughout 2019.

The reasons cited for the layoffs were regulatory concerns, market conditions, and the need to streamline operations to refocus on profitability.

ConsenSys, a blockchain venture production studio, announced a strategy shift to streamline its business, which led to a 13 percent reduction in its team. Steemit, a blockchain-based social media platform, laid off 70 percent of its staff, and Shapeshift, a digital asset exchange, reduced the size of its team by a third.

In November 2019, New York-based blockchain analytics firm Chainalysis laid off 39 employees, about 20 percent of its workforce, and Circle reported layoffs in May and a new round in December.

At the end of December, Bottle Pay, a custodial bitcoin wallet provider, shut down operations in response to the EU's Fifth Anti-Money Laundering Directive (5AMLD) that comes into effect on 10th January 2020. The 5AMLD introduces stricter regulatory controls across more sectors, including cryptocurrencies. Several other European firms have shut down in response to the new Directive.

Cryptocurrency mining company Bitmain closed its Israel-based research and development arm and laid off more than 50 percent of its employees. Recent reports suggest that Bitmain has plans to further reduce its workforce this year before the Bitcoin block reward halving that is likely to occur in May.

Many smaller firms also closed during the year.

The volatility in cryptocurrency prices continues to affect the blockchain job market.

Devin Banerjee, a Senior Financial Services Editor at LinkedIn, plotted the proportion of new hires that are blockchain developers according to LinkedIn data, with the monthly price of bitcoin. 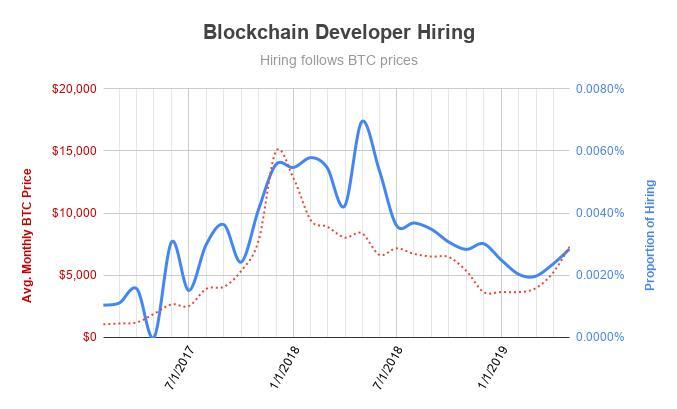 The data shows how the hiring market for blockchain developers tends to follow BTC prices.

In LinkedIn's recent US Emerging Jobs Report, which identifies the top 15 jobs that have emerged over the last five years, Blockchain Developer, is no longer present. Last year, it topped the list.

The report cites that this "may not come as a surprise given the rapid decline in popularity of Bitcoin and other cryptocurrencies."

As the Emerging Jobs analysis is based on LinkedIn members with a public profile, I should mention that many within the crypto space do not have a LinkedIn profile for security reasons, and several crypto profiles on the professional networking site have been found to be fake.

LinkedIn's report is an interesting data point, but it does not reflect the overall state of the blockchain and crypto hiring market.

Based on Cryptocurrency Jobs data, despite the bear market and volatility in cryptocurrency prices, demand for blockchain talent and interest in working in the crypto space has remained strong throughout 2019.

Although the LinkedIn Report states that there has been a rapid decline in the popularity of Bitcoin and other cryptocurrencies, a survey conducted by The Harris Poll on behalf of Blockchain Capital presents a different picture.

Despite the bear market, the data shows that Bitcoin awareness, familiarity, perception, conviction, propensity to purchase and ownership all increased/improved significantly — dramatically in many cases. The results highlight that Bitcoin is a demographic mega-trend led by younger age groups.

In Electric Capital's Developer Report H1 2019, which focuses on developer activity from June 2018 to June 2019, the authors conclude:

The crypto space is also global, and there has been much activity outside the US.

The country is seeing a rise in digital transactions, and therefore industries are ramping up investments in blockchain. This strong demand for blockchain tech talent puts ‘blockchain developer' on top of the list.

During 2019, 1135 crypto and blockchain jobs at 472 companies and startups were posted on Cryptocurrency Jobs.

As in previous years, the crypto space continues to be dominated by engineering roles.

Here's a breakdown of blockchain jobs distributed across roles:

With the refocus on profitability and bringing products to market, there has been an increase in blockchain design, marketing, and sales roles.

Compliance, legal and regulatory related roles have also seen an increase in demand, which reflects the changing regulatory environment for cryptocurrency companies.

Regulators have also had to increase their digital asset teams.

During the year, the US Securities and Exchange Commission posted job openings for a Digital Asset Expert and a Securities Compliance Examiner (Blockchain Expert).

The US Federal Reserve has been looking to hire a manager to oversee its traditional payments section and research "digital currencies, stable coins, distributed ledger technologies, and broadly financial/digital innovation in retail payments."

2019 was also the year of Decentralized Finance (DeFi). The explosive growth in DeFi contributed to many new job openings.

Most crypto job opportunities are in San Francisco and New York. In Europe, the main hubs are London and Berlin, and in Asia, it's Singapore and Hong Kong. In Latin America, it's Buenos Aires.

An exciting trend in 2019 was the increase in crypto job opportunities in Africa.

Many will be looking at Africa this year as Jack Dorsey, CEO of Square Crypto and Twitter, has announced plans to move temporarily to the continent following a month-long visit to entrepreneurs. 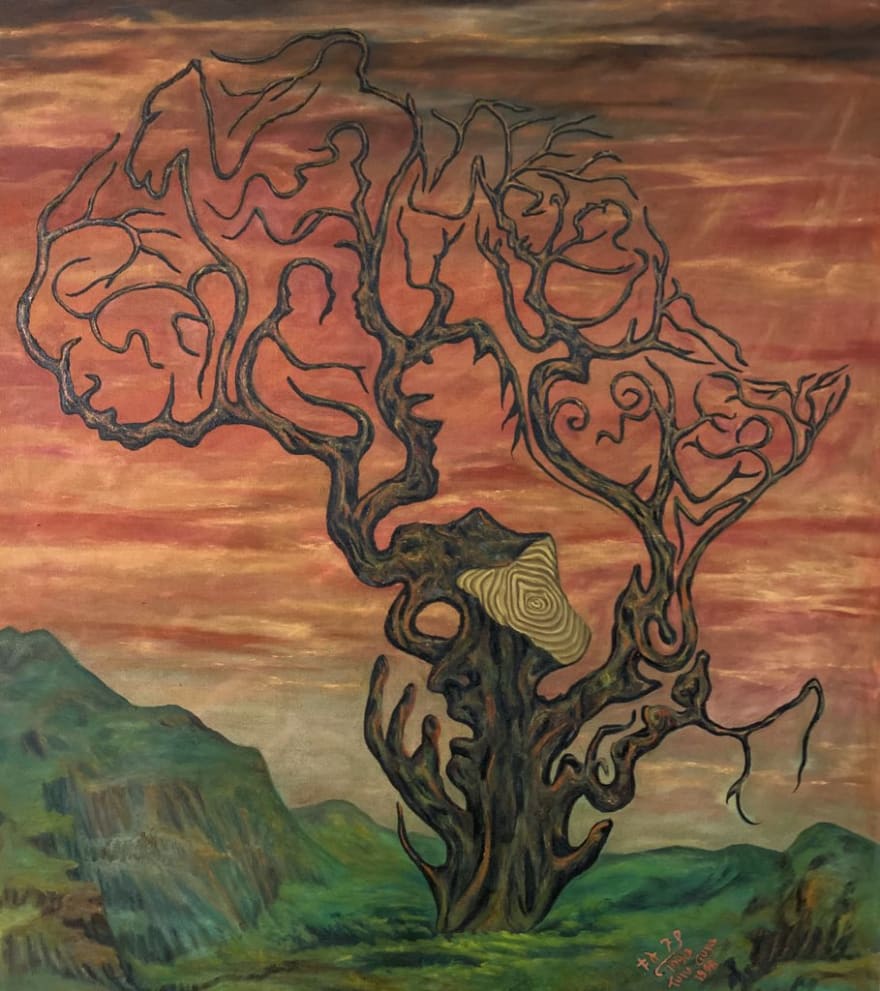 Sad to be leaving the continent…for now. Africa will define the future (especially the bitcoin one!). Not sure where yet, but I’ll be living here for 3-6 months mid 2020. Grateful I was able to experience a small part. 🌍

The Cryptocurrency Job Market is Maturing

In addition to the growth in blockchain job openings, another sign that the crypto industry has matured is the high-profile executives that have entered the space.

During 2019, there were many notable hires from Wall Street, the tech industry, government, and beyond.

Since I launched Cryptocurrency Jobs in 2017, I've interacted and helped many people that want to transition into the crypto space.

Despite the bear market, company layoffs, and uncertainty in the space, job seekers remain optimistic. From the high school teacher to the corporate professional to the undergraduate, they're all looking for an opportunity to join the crypto industry.

Although they express many reasons for why they want a career in crypto, a common factor is that it presents them with the opportunity to work on something that has never been done before; to build a better system, a decentralized future.

Unfortunately, two common myths continue to come up in my conversations with job seekers that I want to dispel.

You don't need to be a developer to work in this space. Over 40 percent of jobs on Cryptocurrency Jobs are non-technical.

You also don't need prior blockchain work experience. Although some companies require previous experience, many are more interested in your prior work experience and that you are passionate about working in the space. This is true across roles.

If you are interested in working in crypto, please apply. Do not self-reject.

A Call for Internships and Entry-Level Opportunities

There are still too few entry-level roles and internships available.

With the rise of crypto in higher education and the recognition that Bitcoin is a demographic mega-trend led by younger age groups, there needs to be more job opportunities for these young, creative, and talented individuals.

In 2020, I'd love to see more entry-level and internship opportunities across roles, ideally, that are remote so everyone can apply.

If you're hiring interns or offer entry-level opportunities, get in touch, and I will help you.

While it's still early days, I'm excited about cryptocurrency and what's possible as more talented people of all demographics and backgrounds from around the world join forces and leave their mark on this space.

If you are currently hiring or plan to do so this year, get in touch as I want to help you grow your team.

Product to Programmer: why I gave up a great Product career to learn to code

Building a To-Do app It has never been easier 🔥

Once suspended, 3reps will not be able to comment or publish posts until their suspension is removed.

Once unsuspended, 3reps will be able to comment and publish posts again.

Once unpublished, all posts by 3reps will become hidden and only accessible to themselves.

If 3reps is not suspended, they can still re-publish their posts from their dashboard.

Once unpublished, this post will become invisible to the public and only accessible to Daniel.

Thanks for keeping DEV Community 👩‍💻👨‍💻 safe. Here is what you can do to flag 3reps:

Unflagging 3reps will restore default visibility to their posts.