⚠️ The project configuration section is intentionally omitted. All the source code is located in this repository.

Vuex@v4.0.0-beta.1 is officially released. One of the breaking changes that was introduced is that the library is no more shipped with global typings for this.$store within Vue Component.

Vuex 4 removes its global typings for this.$store within Vue Component

More information about reasons and motivations behind it you can find in this issue.

Since global typings is removed, it's up to a developer to define it by himself. As stated in release notes:

When using TypeScript, you must provide your own augment declaration.

In this article I want to share my experience of augmenting types of a store. I will demonstrate this with an example of simple store. For simplicity, our store is as dumb as possible.

Let's do some coding.

We need to export type of a state because it will be used in definitions of getters, mutations and actions.

So far so good. Let's go ahead to mutations.

As stated in the Vuex docs:

It is a commonly seen pattern to use constants for mutation types in various Flux implementations.

So, all of our possible names of mutations will be stored in the MutationTypes enum.

Now that we have defined the names of mutations, we can declare a contract for each mutation (its actual type). Mutation is just a simple function, which accepts state as the first argument and payload as the second, and eventually mutates the former. State type comes in action, it is used as the type of the first argument. The second argument is specific to a particular mutation. We already know that we have SET_COUNTER mutation, so let's declare types for it.

Great! It's time to implement it.

The mutations variable is responsible for storing all of implemented mutations, and eventually will be used to construct the store.

MutationTree<State> & Mutations intersection of types guarantees that a contract is correctly implemented. If it isn't, TypeScript complains and we get the following error: 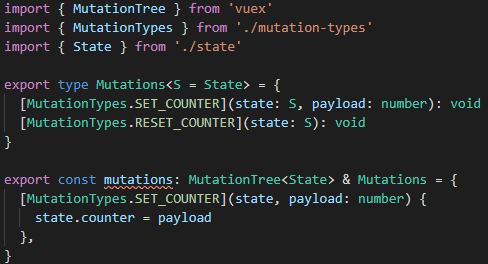 Just a few words about MutationTree type. MutationTree is a generic type, that is shipped with the vuex package. From its name it's clear, that it helps to declare a type of mutation tree.

There is no need for actions for such a simple store, but to illustrate typing for actions, let's imagine that we can fetch counter from somewhere.

We have a simple GET_COUNTER action which returns Promise, which is resolved in 500ms. It commits the previously defined mutation (SET_COUNTER). Everything seems okay, but commit allows committing any mutation, which is inappropriate, because we know the we can commit just defined mutations. Let's fix it.

In the same way as we declare a contract for mutations we declare a contract for actions (Actions). We must also augment the ActionContext type which is shipped with the vuex package, because it supposes we can commit any mutation. AugmentedActionContext do the job, is restricts committing only the declared mutations (it also checks payload type).

Getters are also amenable to be statically typed. A getter is just like mutation, and is essentially a function which receives state as its first argument. A declaration of getters is not much different from a declaration of mutations.

Core modules of the store have been defined, and now we can actually construct the store. A processes of store creation in Vuex@v4.0.0-beta.1 is slightly different from Vuex@3.x. More information about it is located in release notes. The Store type should be declared to safely access the defined store in components. Note that default Vuex types: getters, commit and dispatch should be replaced with types which we have defined earlier. The reason of this replacement is that default Vuex store types is too general. Just look at the default getters types:

Without a doubt, these types are not suitable in case you want to safely work with a typed store.

I will not focus on the TypeScript's Utility Types.

We are at the finish line. All is left is the augmentation of the global Vue types.

Perfect! We are ready to enjoy a fully typed store access.

Now that our store is correctly declared and is statically typed, we can utilize it in our components. We will take a look at a store usage in components defined with Options API and Composition API syntax, since Vue.js 3.0 supports both.

To use store in a component defined using Composition API, we must access it via useStore hook, which just returns our store:

The result of our efforts is fully statically typed store. We are allowed to commit/dispatch only declared mutations/actions with appropriate payloads, otherwise we get an error.

By now Vuex does not provide correct helpers to facilitate process of typing, so we have to do it manually. Hope, that the following versions of Vuex will be shipped with the flexible store typing.

Normal vs Shallow vs Deep Copy in Javascript/Typescript

Once suspended, 3vilarthas will not be able to comment or publish posts until their suspension is removed.

Once unsuspended, 3vilarthas will be able to comment and publish posts again.

Once unpublished, all posts by 3vilarthas will become hidden and only accessible to themselves.

If 3vilarthas is not suspended, they can still re-publish their posts from their dashboard.

Once unpublished, this post will become invisible to the public and only accessible to Andrew.

Thanks for keeping DEV Community 👩‍💻👨‍💻 safe. Here is what you can do to flag 3vilarthas:

Unflagging 3vilarthas will restore default visibility to their posts.