Learn how to create an animated SVG face using CSS animations, transforms, and an optional pinch of JavaScript.

Here's a preview of the demo that allows you to change Buddy's emotions:

We can achieve a basic face using two SVG elements:

But first we need our base SVG element, for which we'll include the viewBox attribute which acts like a window into the SVG and provides hints at the SVG aspect ratio:

Next, we'll add the eyes. These will be nearly identical except for the cx attribute, which moves the position of the ellipse along the x-axis.

We add fill="currentColor" so that the color defaults to the text color of the SVG's nearest ancestor.

You can review the MDN docs on ellipse for more info on the other attributes.

Finally, we add a path for the smile:

Let's break down the attributes:

Here's the face with the Bézier curve control points visualized: 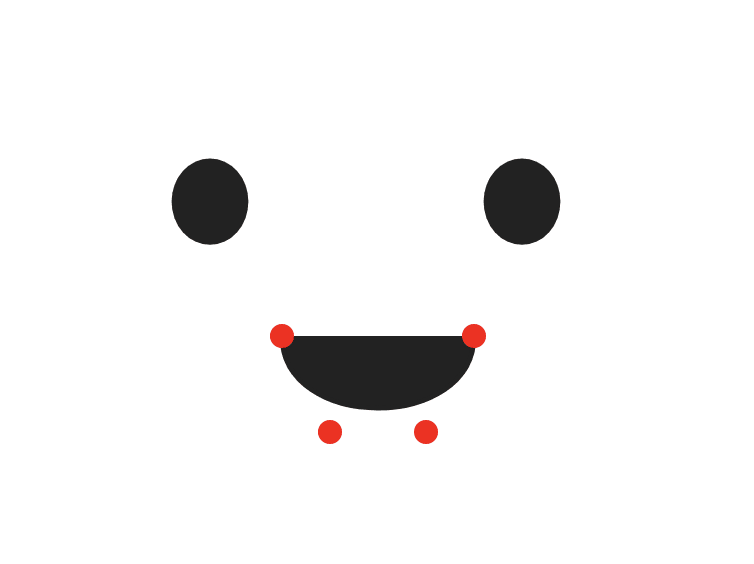 Our first emotion, "Excited", is the default state as mentioned.

For both "Happy" and "Sad", we want to remove the fill on path to change the mouth appearance to a closed-mouth smile. We'll also increase the stroke-width:

The full demo shows how to use clamp for a more dynamically sized stroke-width and button font-size.

For sad, we need to flip the smile upside down, and we can quickly accomplish this with a CSS transform:

Where scaleY(-1) horizontally flips the element. Since we have multiple elements within the SVG, we had to also use transform-origin to make sure the transform of the path was relative to it's original location. TBH, this took a little trial and error to find these values :)

In the demo, you'll also see a transition added to enable smoothly moving from one emotion to the next. Altogether, these properties allow simple but effective animations without the need to pull in an animation framework.

The wink also uses a transform but within an animation setup with @keyframes. We alternate between a "squint", which is achieved by flattening the eye ellipse, and fully open to produce the wink effect:

The squint uses a classic animation trick similar to a ball squish that simultaneously slightly widens the element (1.5) while also reducing it's height (0.25) within the scale function. Those numbers are proportions of the computed element size. So to bring it back to the original size, we update the values both to 1 (since it's the same for both, we can define it with a single number).

To apply the wink animation uses the following CSS rule:

Again we had to adjust the transform-origin for the same reasons as discussed for the smile path.

We applied the animation with a duration of 480ms, an easing function of ease-in-out, and play it 1 time.

But you may have noticed in the preview gif at the beginning (or if you skipped to the demo) that the wink repeats every so often. For this, we need to add in a bit of JavaScript to re-trigger the animation.

The very minimal Javascript finds the SVG element, then uses setInterval to add the wink class every 5000 milliseconds (5 seconds).

Importantly, we add an event listener attached to animationend to remove the wink class. Adding and removing the wink class allows restarting the animation at the interval.

The demo includes an extra check to only allow adding the wink class if Buddy isn't "Sad".

You can review the full demo in this CodePen, and then check out ButtonBuddy.dev to create your own accessible button color palette!

If you enjoyed this tutorial and ButtonBuddy, check out my other CSS resources at ModernCSS.dev and consider buying me a coffee.

How to Use Winston in Vite