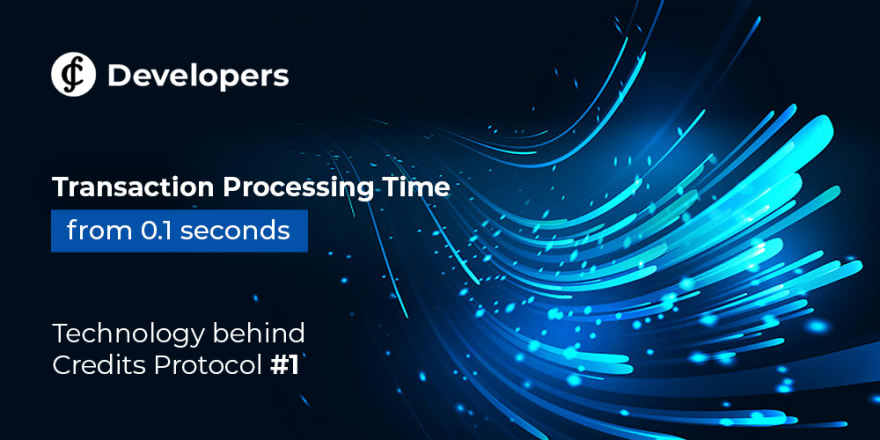 The long wait times caused by payment validations or transactions have been a prime issue for some blockchain platforms. In general, blockchain transactions are being processed within seconds, minutes, or a few hours at most, which in this case can be a reason for high transaction fees. Speed and efficiency are becoming the main factors that save time for users. There are various use cases where transaction speed demonstrates its importance like in such industries as online gambling, banking, financial services and many more. Thus, providing high transaction speed becomes the top priority for blockchain systems. In this article, we are going to explain why Credits Blockchain Platform’s transaction speed is higher and what are the underlying reasons for its outstanding performance. Let us take a look at such platforms as EOS, Ethereum, and Tron in order to find out why Credits is an absolute competitor in the blockchain market.

Recently, EOS has gained the reputation of being one of the quickest crypto platforms for its agility. The transactions take on average 1.5 seconds to process. Ethereum performs a little slower in terms of its average transaction speed which varies from 14-17 seconds and the maximum capacity ranges from 10 to 30 transactions per second. Tron transaction speed is 3 seconds on average. Nevertheless, that becomes a disturbing factor for the widespread use of popular blockchain platforms for the execution of continuous transactions.Yet the Credits platform offers the transaction processing speed from 0.1 of a second combined with the commission rates of as low as $0.001. So what is behind Credits high transaction speed time? Let’s find out!

The Credits Blockchain Platform is a decentralized peer-to-peer network. It operates through the Internet and uses the TCP/IP network model as the principal model for intra-network data and command transfer. Network participants interact with each other based on peer-to-peer models. All data transfers over the network are performed by means of the UDP transport layer protocol of the network model, and high-performance NoSQL system which is the storage concept employed for key-value data storage (LevelDB).

In order to understand the process of transaction speed time, a few important aspects such as consensus algorithm, Credits Data Transmission Protocol (CDTP), and platform optimization are going to be further discussed.

Credits Blockchain Platform can combine all participants of financial services and other industries by executing all transactions safely and quickly. To provide high speed and stability, Credits implemented its unique Consensus Protocol - CDCA (Credits Decision Consensus Algorithm) which is a decision-making algorithm based on multiple validation and data processing with secure implementation solution. The algorithm based on dPoS (Delegated-Proof-of-Stake) and BFT (Byzantine Fault Tolerance) protocol. This algorithm goes as following:

The nodes involved in pool processing do not participate in building the next round.

There is a node participating in consensus with the balance of 50K+ CS. The DPoS’s functionality is based on checking if 50K CS is available on a user’s wallet balance. If it is, then the node is passed to consensus. Thereby, the generation of the list of nodes participating in a particular round is done, according to DPoS technology.

Also, another module that the Credits platform uses - its own CDTP combined protocol to increase the speed of transaction processing and to provide complete security of data storage.

The general concept of Credits Data Transmission Protocol (CDTP) goes as following: the TCP/IP network model is represented by the UDP (User Datagram Protocol) transmission protocol. Computer applications can send messages (in this case referred to as datagrams) using UDP to other hosts over an IP-network without obligatory preliminary messages for selection of a special data transmission protocol.

The source code of the platform is optimized for extremely specific tasks, i.e. high data transfer and processing speed. This is primarily achieved through direct device processor operation. The operational efficiency of hardware is ensured by low-level programming languages. They subsequently take the shape of subprograms and are combined with the code written in a high-level language.

Raising transaction processing speed is one of the top priority lists for the blockchain technology development. Faster transaction speed is essential not only due to its convenience for crypto and dApps users but also because it is in a position to challenge traditional payment methods. After exploring the most competitive blockchain platforms, we can summarize that Credits stands out in the blockchain market due to its unique functionality and ability to provide both outstanding high speed and stability. To sum up, the Credits transaction processing speed is achieved through the Credits Consensus Protocol (using BFT principles), CDTP protocol, and platform optimization. The blockchain system with the processing speed from 0.1 of a second combined with the commission rates of as low as $0.001, appears to be an absolute competitor in the blockchain market.

Delete all node_modules folders from your system ? 🤔

5 Top Node.js Streams Resources You Should Learn to Level Up Your Node.js Skills 🚀💯

Once suspended, _aandrey will not be able to comment or publish posts until their suspension is removed.

Once unsuspended, _aandrey will be able to comment and publish posts again.

Once unpublished, all posts by _aandrey will become hidden and only accessible to themselves.

If _aandrey is not suspended, they can still re-publish their posts from their dashboard.

Once unpublished, this post will become invisible to the public and only accessible to Andrey_A.

Thanks for keeping DEV Community 👩‍💻👨‍💻 safe. Here is what you can do to flag _aandrey:

Unflagging _aandrey will restore default visibility to their posts.