Github is the new open source game changer in application development. You can host your code on GitHub and do amazing things including branching, Reviews, PR, Push and Pull. Github also provides a sophisticated set of options to host and maintain code.

In this article, I will make a complete workflow from pushing the code to automatic deployment to live website or application. For the purpose of this tutorial, I have assumed that you have made a website or web app and that you are ready to push it to GitHub.

The first step of the process is the installation of git on the local machine. Git is a well-know code version control system. Developed by the eminent Linus Torvald, Git is an open-source project that ensures that the complete history of the development of the code is meticulously maintained. Download the git installer and install it on the local machine. 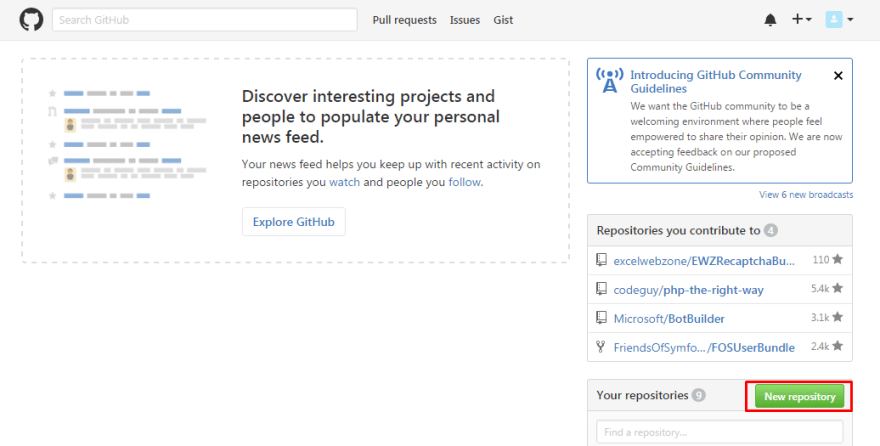 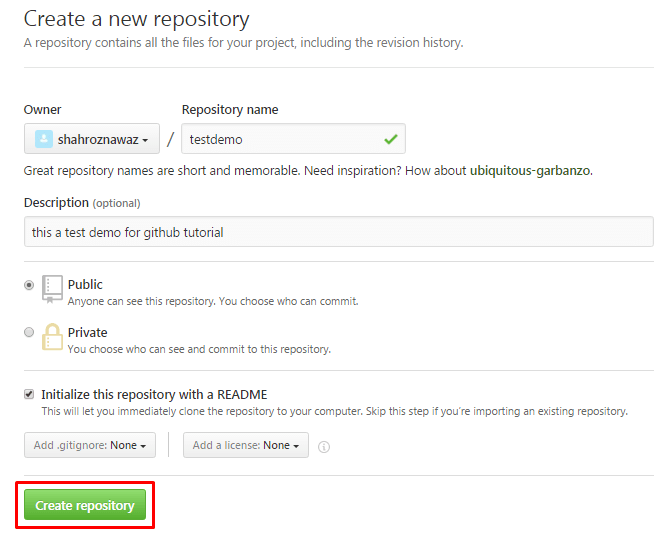 The repository is now available for further processing.

The next step is to push the code in this repository . For this, navigate to the project saved in your local system and follow the next step.

Pushing Code to the GitHub

For the purpose of this tutorial, I have created a simple website. I will push this project in testdemo repository.
The following commands are used to push the code to the GitHub repository. I assume that you are already in the test project's directory. Next, launch the command prompt.

Running git add . command adds the entire directory to the index. if you want to add only one file then run this command git add <filename>

This command sends a commit message with new changes in the code.
Type git commit -m “my first commit”

This command will commit all the changes from the staging environment and create a new pointer with a unique hashcode. All commits will be identified by the Unique hash codes.

To see the complete History Of commits run the following command.

you will see all the commits in the list.

The next step is to add the URL of the GitHub repository in which you want to push the code. Since I have created the testdemo repository, I will use the corresponding link.

This will add the remote URL to the git index and the repository is ready for code deployment.

The final step is to push the code to GitHub. You should also specify the branch name in which you want to push the code. Run the following command:
git push origin master

A sign-in form for GitHub will be open. Enter your GitHub credentials and hit the login button. 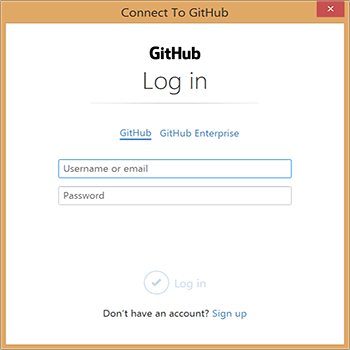 Once the processing finishes, the code has been successfully pushed to the GitHub repository. Open GitHub and check the repository.

Working With Branches In Git

Git Provides the playground in the form of branches you can test the code in separate branch and finally merge it to master. Branch is a separate working directory contains it's own staging environment in which you can commit changes and maintain the history. Let's see some of the main commands for branches.

You can also Switch between branches by following command.

You will see the Head(*) moves to demobranch.

Clone Your App on Any Hosting

At this point, the application has been successfully pushed to GitHub and the initial configuration on local machines has been done.

Now, I need to host the website on a hosting service so that the automatic deployment feature could be tested. . You could use any hosting platform for testing. Personally, I prefer Cloudways because it is a managed hosting solution. I have already created an account and a PHP application is already active on my server.

Check the staging URL, where you will see the website running live.

Here comes the exciting part of the tutorial.

I will now create a github.php file and upload it to the hosted project. Basically I will add a command in the file that will automatically pull the code every time the code is pushed from the local machine. While this looks like magic, the answer lies in a webhook that is added to the GitHub repository.

This simple command changes the game. To add the webhook in the github.php, first find the path of the file on the Cloudways server. In my example, the path is:
http://phpstack-21306-56790-176024.cloudwaysapps.com/testdemo/github.php

Copy the path and paste it in GitHub webhook settings. 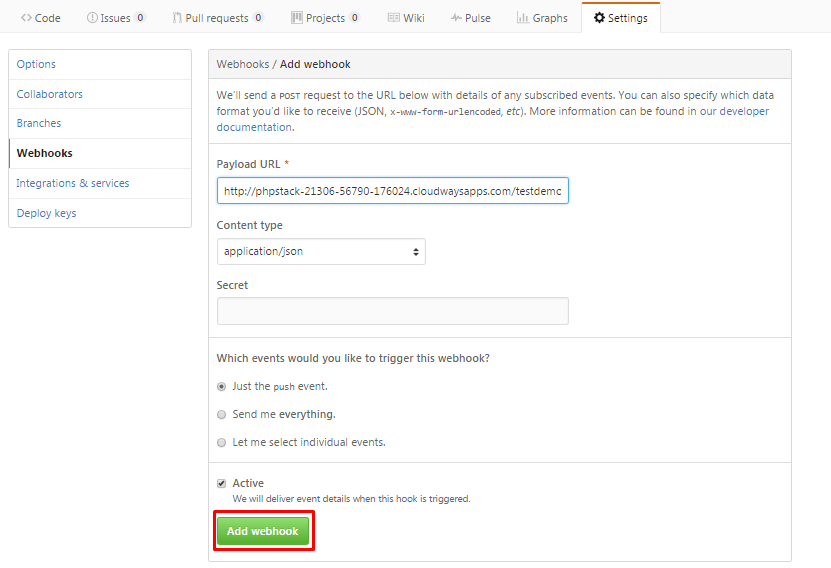 Add the webhook and go to index.html on the local machine. Make changes to the code and then push the code using the following commands:

Check the webhook, and it will show how successful deployment of code looks like.

For people who do not wish to go through the lengthy article above, here is a short summary of the five Push commands:

You need to enter your GitHub credentials when pushing the code to a repository.

Working With Branches In Git

Git allows you to test various approaches by forming a branch for every idea. Once you are done, you could merge the branches with the master branch. Every branch is a separate working directory with it;s own staging environment in which you can commit changes and maintain the history of the branch. Here are some important commands for branches.

You can also switch between the branches through the following command.

You will see the Head(*) being moved to demobranch.

Though the process of pushing code from the local machine to live website appears very tempting, it often has unintended consequences. There is always a chance that someone on the team will push code that might break the live project. In this case you need to setup branches and then commit the final code to master branch.You can also use the deployment libraries like deploy

The git command that will change your life! Don't have those git nightmares 😰 anymore.