Describe each of the following components in Ansible, including the relationship between them:

Task – a call to a specific Ansible module
Module – the actual unit of code executed by Ansible on your own host or a remote host. Modules are indexed by category (database, file, network, …) and also referred to as task plugins.

Play – One or more tasks executed on a given host(s)

Playbook – One or more plays. Each play can be executed on the same or different hosts

Role – Ansible roles allows you to group resources based on certain functionality/service such that they can be easily reused. In a role, you have directories for variables, defaults, files, templates, handlers, tasks, and metadata. You can then use the role by simply specifying it in your playbook. 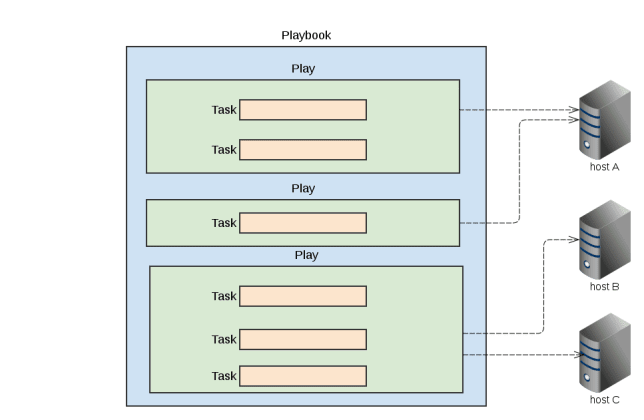 Write a task to create the directory ‘/tmp/new_directory’

A very basic question, but indicates how you work with Ansible. Many will answer this question by using the shell or command modules. It doesn’t necessarily bad, but the best practice is always to use an explicit Ansible module (in our case, the ‘file’ module).

Why? Mainly due to readability. Some actions execute differently on different operating systems, but the module use is always the same and any Ansible user will know what you meant when reading the task (especially if it’s a long shell command).

Note: it doesn’t necessarily mean that modules are faster than the command(s) you specified with ‘shell’ or ‘command’.

The task of creating the directory

What is the result?

What would be the result of the following play?

When given a written code, always inspect it thoroughly. If your answer is “this will fail” then you are right. We are using a fact (ansible_hostname), which is a gathered piece of information from the host we are running on. But in this case, we disabled facts gathering (gather_facts: no) so the variable would be undefined which will result in failure.

The purpose of this question is to check if you know what is a fact but also whether you are paying attention to the small details.

To answer this question you have to be familiar with register, conditionals, and loops*.

The first task uses the ‘stat’ module to check if the file exists on each system then captures the output in a variable called ‘mario_f’ using the ‘register’ term. You can then use the registered variable in any other task. In our case, we capture the stats of ‘/tmp/mario’ file and in the next task, we install the package list if the file exists.

As you can see, for installing the packages we used the “with_items” loop which allow us to iterate over a list and perform the module/task per item in the list. Loops, as in any other language, is a fundamental part of Ansible and you should be aware of the different types of loops supported with Ansible.

Another worth to mention line is ‘become: yes’ which allows us to run the task as root, but can be used with any user we will specify (e.g. become: ‘toad’). The task installing package list will fail unless this line is included since package installation can be done only with sudo permissions on the machine.

Write a playbook to deploy the file ‘/tmp/system_info’ on all hosts except for controllers group, with the following content

The playbook to deploy the system_info file

Using a template will make your playbooks and roles much more dynamic and easily adjusted to different scenarios. Ansible uses a powerful templating engine called ‘Jinja2‘ to construct dynamic templates of files. Many popular projects and companies are using it (Flask, Mozilla, …) and we strongly recommend you take the time and learn using it as it will serve you well in the future.

When writing jinja templates for Ansible it is considered best practice to add the variable ‘ansible_managed’ at the top of the template. This variable expands to a string letting whoever reads the output file that this file was generated by Ansible and managed by it.
Next, we use ansible_hostname which is the unqualified name of the host and ansible_distribution which is the OS distro.

Be aware that this question could be implemented in other ways. For example, instead of using ansible_hostname, someone could use inventory_hostname. They are not the same, but they both would fit fine in this case.

How do you test your Ansible based projects?

When I ask this question in some interviews, I get many different answers. Let’s go over some of them.

Write a playbook to install PostgreSQL on all servers in database group (assume Redhat) and update postgresql.conf with a configuration from the template postgresql.conf.j2 (assume it’s there, don’t write one).

In addition, provide users with a way to run only the configuration update task (without installing the packages).

There are two things you should not miss here: handlers and tags. Your playbook should look similar to the following:

As you can see I have put everything in the same file, but a better solution would be to create a role and put each section into its own directory (vars, handlers, tasks, …). We’ll have detailed question and answer on roles later on.

The first thing to note here is handlers. Handlers allow us to trigger action (usually a task) upon a change. As you can see, the syntax is quite simple, using the keyword ‘notify’ we can provide a list of actions to execute. This makes a clear separation between what are the main tasks, required for installing and configuring PostgreSQL and what are the small “sub” actions required for the tasks to be complete.

The second thing to note here is ‘tags’. This answers the second part of the question on how to allow users to run only the configuration update part. Imagine you have 100 tasks and you want only run a small portion of them, let’s say four tasks which responsible for updating your application. Without tags, you would have to run everything in your playbook, but tags allow you to run only those you marked with a specific tag.

The right answer is ‘toad’.

Variable precedence is about how variables override each other when they set in different locations. If you didn’t experience it so far I’m sure at some point you will, which makes it a useful topic to be aware of.

In the context of our question, the order will be extra vars (always override any other variable) -> host facts -> inventory variables -> role defaults (the weakest).

A full list can be found at the link above. Also, note there is a significant difference between Ansible 1.x and 2.x.

Which Ansible best practices are you familiar with? name at least three

As already stated, not every mentioned best practice is an official one (= in Ansible docs) and that’s totally fine as long as you can explain why it’s a best practice (or more accurately a good practice).

Write an Ansible Ad-Hoc command to create the file ‘/tmp/info” on all hosts with the content: “The inventory file is in [inventory_file_path] and the inventory groups are [inventory_groups]”

Note: you should also list the hosts which included in the inventory groups

Knowing the different ways to execute Ansible can save you time in the future. One of them is the Ad-Hoc way which is a very quick way to run anything on a remote host.

In our case, our ad-hoc command will look like this

-m for specifying the module name. We used ‘copy’ but you could also use other modules for achieving the same result.

I suggest running a couple of ad-hoc commands in order to be familiar with it and feel comfortable enough to run them on demand.

Coding Interviews are not broken!

How to generate Permutations in SQL?

Nearest Smaller Element on Left of an Array

Arie Bregman
Big fan of homemade pizza and reusable code.
What are the coolest uses of AI you've seen in the last couple of weeks?
#discuss #ai
I passed the CPACC exam
#a11y #career #certificate
Do you take notes? The story of a Notetaker
#beginners #codenewbie #career

Once suspended, abregman will not be able to comment or publish posts until their suspension is removed.

Once unsuspended, abregman will be able to comment and publish posts again.

Once unpublished, all posts by abregman will become hidden and only accessible to themselves.

If abregman is not suspended, they can still re-publish their posts from their dashboard.

Once unpublished, this post will become invisible to the public and only accessible to Arie Bregman.

Thanks for keeping DEV Community 👩‍💻👨‍💻 safe. Here is what you can do to flag abregman:

Unflagging abregman will restore default visibility to their posts.