When it comes to storing data, relational database had always been my go-to solution. They're reliable, they're mature, their Structured Query Language (or SQL) is quite powerful and if you design and treat them well, they generally provide great performance.

In relational databases, everything is a table. So for example if you want to store -- say a list of customers -- then you will probably create a customers table where these will be stored.

Here's an example of a very simple customers table:

If you also want to store -- say, the customer orders -- you can create an orders table where each item (or row) in the table would be an order with a link (or relation) to the customer who made the order.

This is a great way to model your data. And in fact many many software projects are built in just this way.

Rather than thinking of your data as a series of tables, it encourages you to think about your data as a network of objects. So a typical example would be your Facebook/Linkedin network. You are connected to someone, that person is connected in turn to someone else and so on.

In graph databases there are really only two types of things: 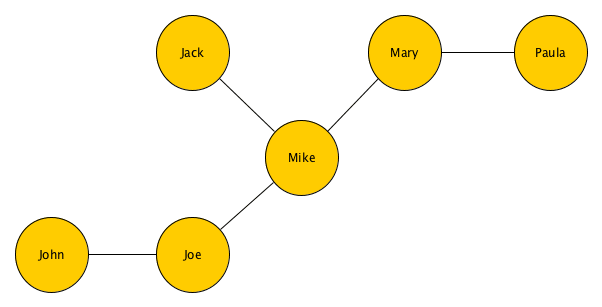 So the yellow circles are nodes/vertices and the lines are the edges.

On the surface this might seem pretty similar to the relational database idea of relations. That's true so long as your network of objects isn't too "wide". Once you have many "degrees of relations" -- i.e. an object links to an object which links to another one and so on -- SQL queries can become somewhat unwieldy to deal with.

This was all interesting to me when I first learned about it, but because I didn't have any practical application for it at the time, I parked it at the back of my head.

And then one day I was faced with an interesting problem I hadn't had to deal with in the past: building a Content Management System. Let's leave aside for a second the build vs. not build a CMS discussion. This is not the point of this article. Let's just say that we had no choice but to build one.

This thing with CMSes though, is that unlike traditional customers/orders type databases, they typically have a much richer set of objects. So in our case, being in the television industry, we had to store films and episodes and series and videos and things like that. But we also wanted to drive the entire experience on the screen straight from our CMS.

That means that we wanted to give our editors the power to define how the homepage would look like for various types of users at a certain point in time. Or we wanted them to schedule certain collection of movies that would appear on the homepage (think Netflix type of experience). Or we wanted certain collection of movies to be driven automatically based on the user interaction with the website.

Looking over this data model it was clear that we had a fairly complex network of objects in our hands. It was at this point that I recalled that graph database thing I parked at the back of my head. This seems like a perfect fit for it.

So I wondered if there was a way for me to eat my cake and have it too. Or use a relational database but as a graph database. There were a couple of things I had to solve in order to make this happen:

The first problem ended up being relatively easy to solve:

Using just two tables I was able to get any conceivable object stored in the node table and be able to arbitrarily connect it to any other object using the edge table. Also, using PostgreSQL's jsonb table I did away with the need to alter my schema ever again to add custom properties/fields.

To solve the second problem, I wrote a pretty thin wrapper around my SQL library to allow me to query my graph of objects in a "graphy" way:

For the third problem, I had to use a little bit of caching magic on the application side. But since the data model is really simple (2 tables) it ended up being pretty straightforward to accomplish.

The solution I just described here ended up being used to power every aspect of our website and mobile apps: https://watch.smithsonianchannel.com

Using Athena Views As A Source In Glue

Arik
Runner | Programmer | Guitar Player
Does every DBA need to understand Transparent Data Encryption (TDE)?
#sql #programming #career #algorithms
Can code be poetic?
#discuss #programming #writing
We are trending on Github, This is how we did it 🤯
#discuss #javascript #webdev #productivity

Thanks for keeping DEV Community safe. Here is what you can do to flag acoh3n: