Following on from my Installing Git for Windows post, today we're going to learn how to get started with our first repository. This is only going to cover the basics, there is much more to Git but you don't need to know that stuff just yet.

The first thing we need to do is go to GitHub and login. Once there, we want to create a new repository, which you can do by clicking the little book and plus icon in the top right hand corner.

For Repository name let's use MyFirstGitProject. Leave the description blank for now, and make sure the repo is public. Finally, check the Initialize this repository with a README option and click Create repository. 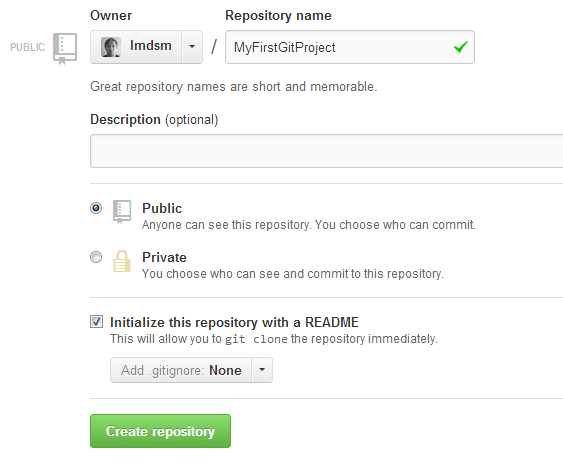 Excellent. Now we have a repository all set up and ready to go. The next thing we need to do is clone it on our local machine. To do this we need to make note of the SSH clone url which we can find on the repo page.

If you're ready to proceed, open up Git Bash. I like to keep my repos in a single directory, C:\GitHub\, so let's try that for now. Note: Git Bash uses Linux style file paths, so we have to keep that in mind when using it. Change directory to C: using the cd command:

Excellent. Now let's clone the repository. Remember that SSH clone url from before, now we need to use it. Be sure to use your username, not mine:

When asked if you want to continue connecting, enter yes. Enter your passphrase and press enter. Now Git Bash will now create a directory for the repo and download all the latest files for you. If you open up that directory in Windows Explorer, you'll see everything has been created and we're ready to add files.

Adding files to the repo

Save the file and go to the Git Bash window. We're now going to add this file to the repository. Even though we created the file within the directory, it isn't actually part of the repo yet. We have to tell Git to track that file, and we do this by adding the file to the repo.

But for when you have more files, or you want to check for changed files, it's easier to just add and update all files at once. For this you can simply type:

Do that now. Make sure you cd MyFirstGitProject/ first though. Once you've done that, let's check to see if the files been added. We want to check the status.

You should see that a new file has been found: MyFirstGitProject.cs! That's good, we've added the file to the git but we haven't actually committed it yet. The way Git works is that every time you want to check in changes, you add the files you've changed and then you commit them, usually with a message. It's easier to learn by doing, so let's commit your latest change.

Here we tell git to commit all changes to the local repository, and we add a message with the -m marker. Make sure you use quotes for your message. If everything goes OK, it should tell you it's added 1 file with 7 insertions (lines).

Pushing the changes to the online repo

So far we've been working locally, as we cloned our online repository. But now we want to push our changes to GitHub for the world to see. This is actually quite easy, but first you must understand how Git works.

A Git repository can have multiple branches, each branch can have a different set of code. Think of it like having a release branch of code that works fine, and a development branch of code that is a bit buggy, because you're working on it. You would make changes to your development branch and then when it's fine, push the changes over to your release, or master branch, as it's often called.

We're not going to make any branches, so we're working on the master branch, the default one. When we push our changes, we select the place to push the changes to (the remote server) and the branch to push (master in our case). When we cloned our repo, Git set up the remote server for us, it's called origin.

So let's give it a try, in Git Bash, type this:

Enter your pass phrase, press enter, and once it's done, go back to your GitHub page and see if the changes are there. They should be. You've just pushed your first code to GitHub. Great stuff.

Pulling changes from the online repo

But what if you're working on another computer, and you've made changes, and now your code is out of date? Well, to update your repo, you need to pull the changes. This is almost identical to the push command:

So let's give it a try, in Git Bash, type this:

It should tell you that you're already up to date, but if you're not, that will pull all the changes that you've made into your local repository.

The general work flow for a single person is to make the repo, clone it, work on files, add them, commit them. When you're ready, push them to GitHub. If you're only ever working on one computer on a project on your own, you'll rarely have to pull changes.

Note: you can commit multiple times without needing to push the changes to GitHub. People often make a commit for each type of change they make. Added a feature? Commit that. Fixed a big? Commit that. If you find yourself writing a paragraph in the commit message, you're not splitting the commits enough.

If you're confused by any of this, feel free to post a comment or head on over to StackOverflow.