Logistic regression is built off of a logistic or sigmoid curve which looks like this S shape here that you see below. . This will always be between zero and one, and it makes it a much better fit for a binary classification problem. So we saw the equation that represents What does the equation look like for logistic regression? What does the equation look like for logistic regression? Basically, it just takes the linear regression algorithm for a line mx + b. And it tucks it up as a negative exponent for e. So our full equation is 1 over 1 + e to the negative mx + b. And that's what creates this nice sigmoid S curve that makes it a good fit for binary classification problems

So when to use Logistic Regression and when not to!!
WHEN TO USE
Binary target variable
Transparency is important or interested in significance of predictors.
Fairly well-behaved data
Need a quick initial benchmark..

Let's make the Logistic Regression model, predicting whether a user will purchase the product or not. 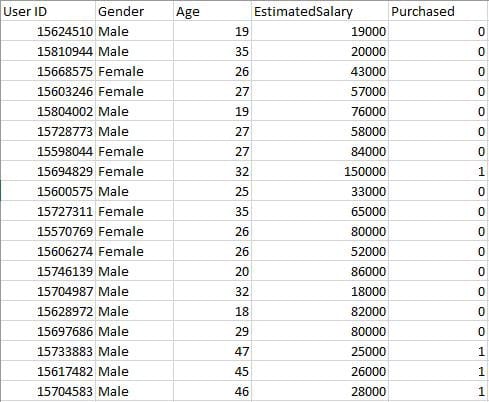 Now, to predict whether a user will purchase the product or not, one needs to find out the relationship between Age and Estimated Salary. Here User ID and Gender are not important factors for finding out this.

Splitting the dataset to train and test. 75% of data is used for training the model and 25% of it is used to test the performance of our model.

Now, it is very important to perform feature scaling here because Age and Estimated Salary values lie in different ranges. If we don't scale the features then Estimated Salary feature will dominate Age feature when the model finds the nearest neighbor to a data point in data space.

Here once see that Age and Estimated salary features values are sacled and now there in the -1 to 1. Hence, each feature will contribute equally in decision making i.e. finalizing the hypothesis.
Finally, we are training our Logistic Regression model.

After training the model, it time to use it to do prediction on testing data.

I will soon be publishing this article on Geeksforgeeks