If you want to use websockets with redux and don't like dependencies, it's not too hard to write your own middleware as long as you understand some basic principles and how the pieces fit together. In this post I'll explain how to write your own websocket middleware and go through the entire websocket "flow" on the frontend. The code for this project can be found here

Step 1: Define an action that will be used to establish a websocket connection

I have defined a const that returns an object, or "action" of type WS_CONNECT.

Some people choose to create an actions.js where they keep all of their actions. I prefer to keep all of my redux actions, reducers, and functions in the same file, grouped by category. Currently my project has 3 modules called websocket, game, and account.

My websocket module looks like this, and it has my WS_CONNECT action:

*Normally I would have a reducer here with something like case WS_CONNECT:, but I don't really need it for websockets because I don't need to save the data in my redux store. I'll show a case in the bonus section with an example of where it is helpful to have.

Step 2: Dispatch your action to open a new websocket connection

My project is similar to a chat application where people join rooms. Once they join the room, I want to establish a websocket connection to the room. This is one approach, with another approach being wrapping your entire project in a websocket connection, which I have an example of at the BONUS section of this post.

In the below example I establish a new websocket connection on componentDidMount when the user enters the room. I am using token authentication which is OK but I suggest using session authentication with websockets because you can't pass a token in a header. I'm dispatching the wsConnect function I defined above, but it's not going to do anything because I haven't written my middleware yet.

Ok, so if you've done something similar to the above then you've written and dispatched an action, just like you would with normal redux. The only difference is you don't need to dispatch the action in the reducer (or at least i don't need to for this example). However, nothing is happening yet. You need to write the websocket middleware first. It's important to understand that every action you dispatch will apply to every piece of middleware you have.

Here is my middleware file, while I'll break down in detail:

Dispatch WS_CONNECT and make a new WebSocket(). Looking at the above, when I am dispatching the WS_CONNECT action, you can see that I have an action.type also called WS_CONNECT that establishes the websocket connection. The WebSocket object comes installed with javascript. I establish a new connection with the host url that I passed in my action.

Javascript WebSocket API. The javascript websocket API comes with three useful properties: onmessage, onclose, and onopen. In the above, I've created handlers to deal with all three of these, called onMessage, onClose, and onOpen, respectively. The most important one is onmessage which is an event handler for when a message is received from the server. The websocket API also has close and send functions which I use in my middleware. 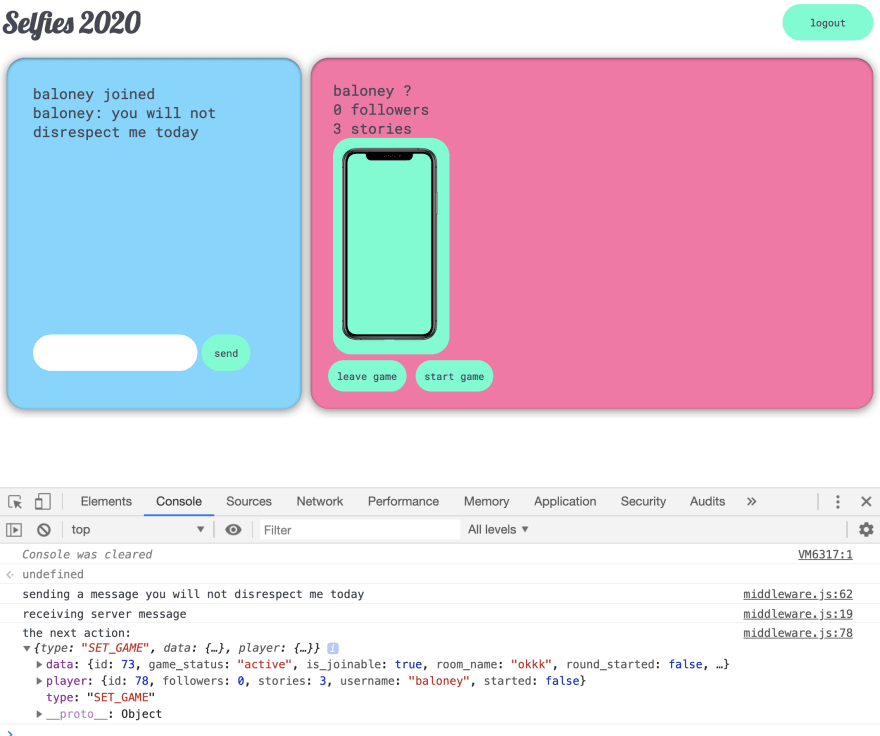 When I type something in the chat, the frontend is sending an action called NEW_MESSAGE to the server with the data. The websocket server receives it and then sends a payload back to the frontend with a type of update_game_players, which essentially includes every relevant thing to the current game, including any new messages. When the frontend receives the action from the server, it dispatches an action called updateGame which has a type of SET_GAME. That action dispatches, but the socket middleware doesn't have any handler for SET_GAME so it goes to the default case, while simultaneously going to the SET_GAME case in my default redux middleware.

Step 4: Create the store with your new middleware

This part is relatively straightforward. As shown in the below example, you are able to create an array with all of your middleware (I'm using my middleware I just created and the redux default) and then create the store using the compose and createStore functions that redux provides

BONUS: Wrap your entire project in a websocket connection

Here is an example of how to wrap you entire project in a websocket connection. This is another pattern that can also be used.

Here is my WebSocketConnection wrapper, which is very simple. It establishes the connection to the websocket

I can now use the connected prop to determine whether to dispatch actions. In the Game.js file I now do this

Once suspended, aduranil will not be able to comment or publish posts until their suspension is removed.

Once unsuspended, aduranil will be able to comment and publish posts again.

Once unpublished, all posts by aduranil will become hidden and only accessible to themselves.

If aduranil is not suspended, they can still re-publish their posts from their dashboard.

Once unpublished, this post will become invisible to the public and only accessible to Lina Rudashevski.

Thanks for keeping DEV Community 👩‍💻👨‍💻 safe. Here is what you can do to flag aduranil:

Unflagging aduranil will restore default visibility to their posts.