And a way better person.

In January 2017, back when I was living in Ukraine, I noticed an ad on a local forum for IT professionals about the first meeting of a newly created Women Who Code Kyiv branch, where the organisers promised to tell more about this global organisation and how it supports women.

I must say, I was growing up in a tough poor environment, and the girls from my school made me genuinely hate women. I felt like I'm an exception from my gender: I loved to study, I was really into STEM and did it way better than even all the boys around me, and I didn't want to gossip about someone's appearance or personal issues. The reality is my sample was too small and too homogeneous to draw any conclusions, but nevertheless it was affecting my life views for a while. I regret it, but at least I have a legit excuse :-p

So I was very sceptical about the whole women community thing-y. As a "proper" systems programmer, with a master's degree and a few years of experience, I was sure that my area of expertise is a very complex one, that only chosen can master the sacred knowledge of memory management, and other, more user-oriented areas with automated garbage collection, are easy. I never met a woman that would love to poke operating systems, so I was sure I was alone in the world with such passions. Now I know that I just wasn't looking hard.

On that evening there were four speakers: a manual QA, a project manager, a designer and a student. So I texted my husband: "Can see women, can't see code." I also was arrogant enough to post it on Facebook in comments, where one of the newly assigned branch directors invited me to help and introduce the "code" part. Good news - I immediately felt really ashamed of my words and felt determined to help with bringing a programmer's perspective. Now I know that my former behaviour was influenced by social pressure due to my gender, but back then I didn't blame the society in general, I didn't blame men that were considering women as lesser minds, I didn't even notice every discriminating action that such men did. I blamed women for being less smart and hence damaging to my gender's reputation.

Anyway, I joined the forces. Along with a dozen of other new members. We announced the start of organisational meetings to outline the short- and long-term goals of such community. The first N meetings we would start with a brief introduction of ourselves and why we ended up sitting around that table caring about women in IT. As a result I met so many brilliant women in such different areas of expertise in IT. With every single story I listened to I was like "And where the hell have you been all my life?" 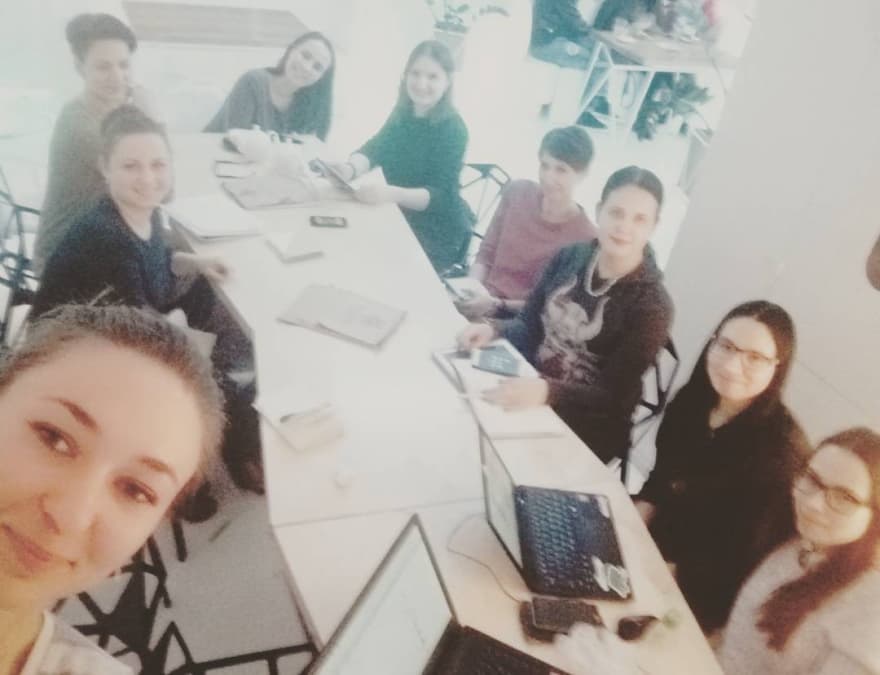 One of the first organisational meetings

Simultaneously I discovered that so many women were forced to give up their dreams, listen to their parents, husbands or whoever else intimidated them for more "feminine" choices. I discovered I wasn't alone on this. When I was 14 and told my mum I'm going to study computer engineering she didn't support my choice and tried to make me change my mind with arguments I have to get married and get kids instead of studying all my life, but to me it sounded hypocritical, because my mother had a master's degree in applied mathematics, half of her life worked with punched cards and later programmed in Fortran, and was teaching mathematics in university during my concious years. She was my only female role model, and yet she was discouraging me to follow my heart (or brain in that case :-D). Now I know that she probably didn't want me to experience gender discimination, but back then it appeared to be odd. Nevertheless, I didn't change my mind, I won the battle, but many women did indeed give up in such situations.

We decided to establish the rules of the community first: 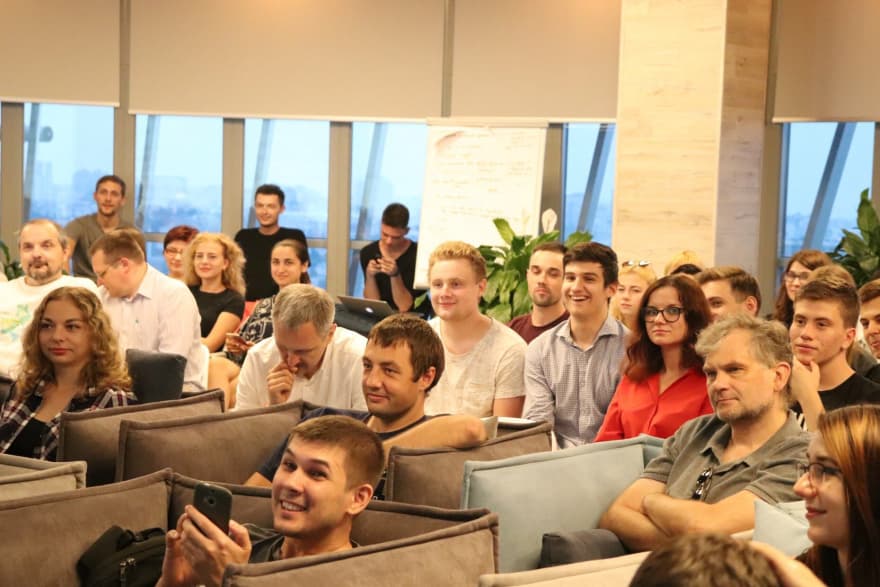 Deep Learning meetup. Yup, sometimes there are more men than women sitting and enjoying talks of our fellow female engineers.

Okay, we set a course to make a first technical meetup (remember, I promised the "code" part?). My point in diversity initiatives is not to make marginalised groups listen to mantras "you are strong, you can do it", but to provide a safe educational space, where everyone can safely assess their technical skills. We found speakers, I discovered design skills in myself and compiled a memorable logo to print on stickers and mugs, we befriended a great company DataArt, who immediately agreed on providing us with a space and snacks, and eventually we were ready to launch our tech initiatives! 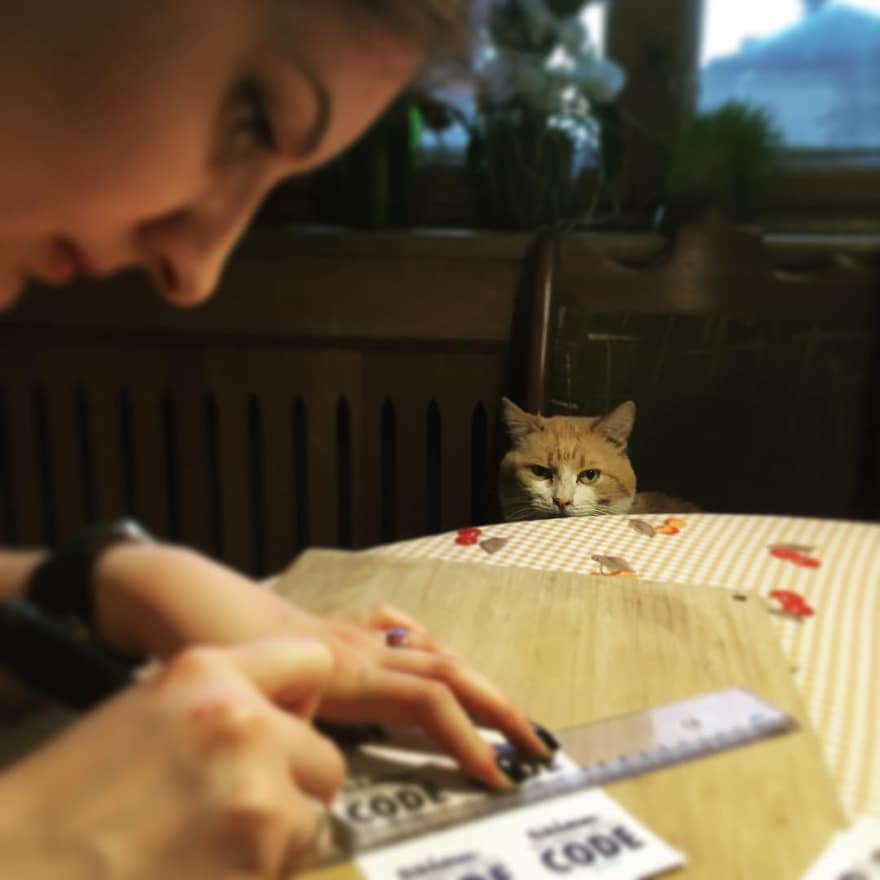 The printing house messed up with stickers, so we had to cut them manually on the last evening before the first event

We had a great turn-out on the event, we had tons of great questions, we had people smiling the whole evening. I haven't seen so many people at a tech event with such happiness in their eyes! Worthless to say, so many happy female engineers! 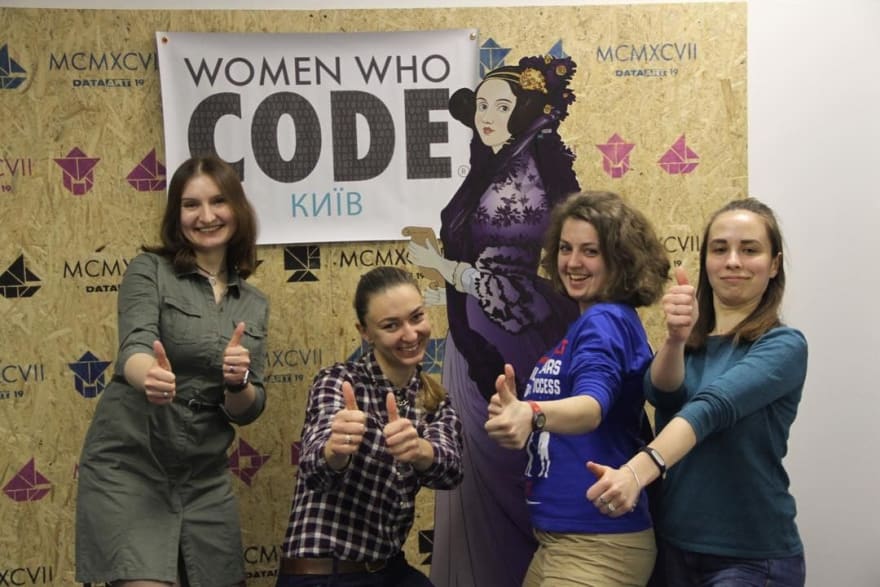 Hey, ladies, what do you think of our first technical event? Lady Ada approves too.

It was a success according to the feedback, which we collect after every single event. Asking for a feedback was one of the many collective ideas. We worked smoothly as a team, didn't even try to dictate any decisions and justify them with authority. 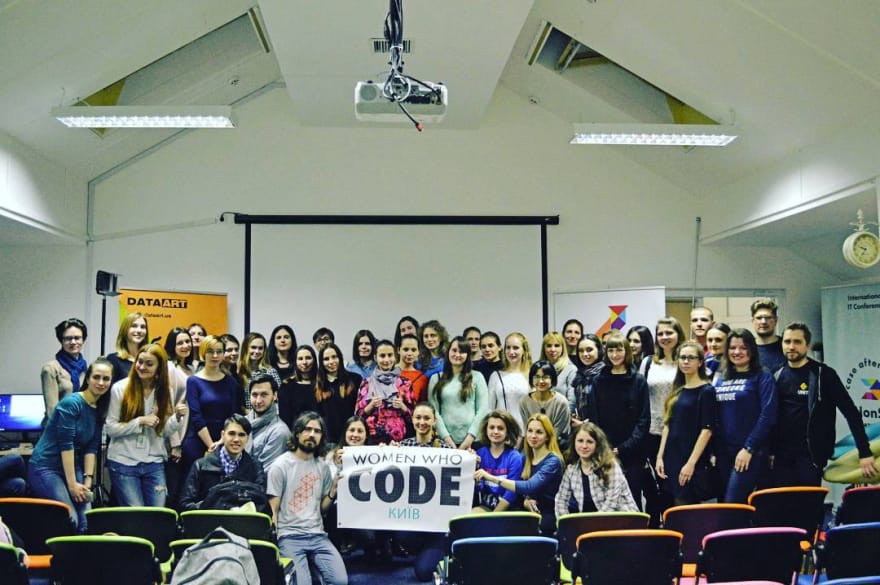 Every single event we do a family photo

On the first event we announced an introductory course based on MIT's 6.0001 "Introduction to Computer Science and Programming Using Python". The course, as any other our event, was free, the applicants had to solve a few puzzles and write a motivational letter in order to apply. These motivational letters were heartwarming and heartbreaking at the same time. One of my favourites was a physics major, who wanted to work at CERN, and she felt that having solid programming skills would help her to become a better scientist. 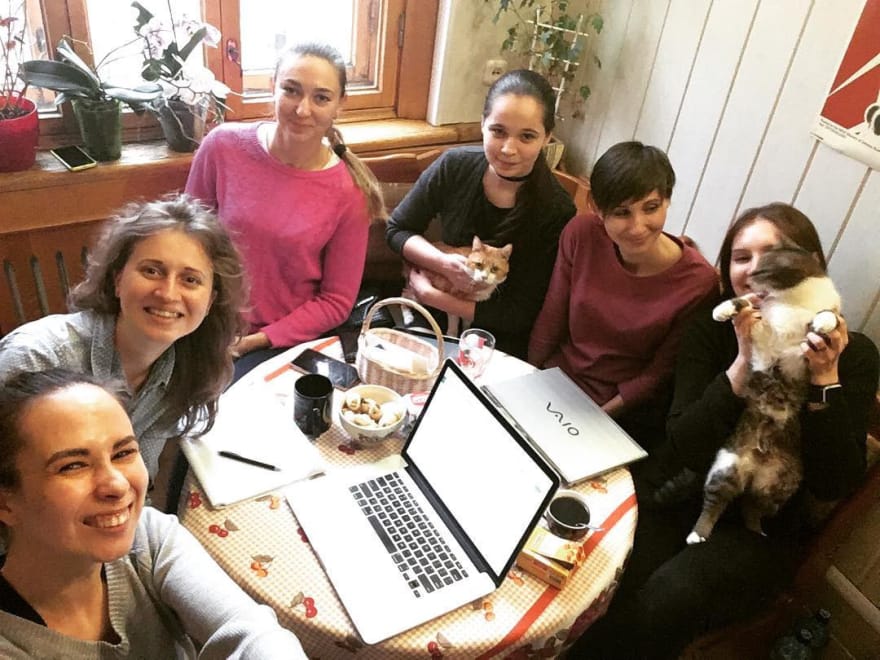 Going through the applications for the course

We picked 28 women and 2 men to start studying with us. We had 4 mentors (3 of which were first-time mentors), students would read the course materials and solve the assignments during the week, ask questions online, and then we would meet every Sunday in a space provided by another company that immediately agreed to help us, Beetroot, spend 3 hours studying offline, and then go exhausted but delighted home. 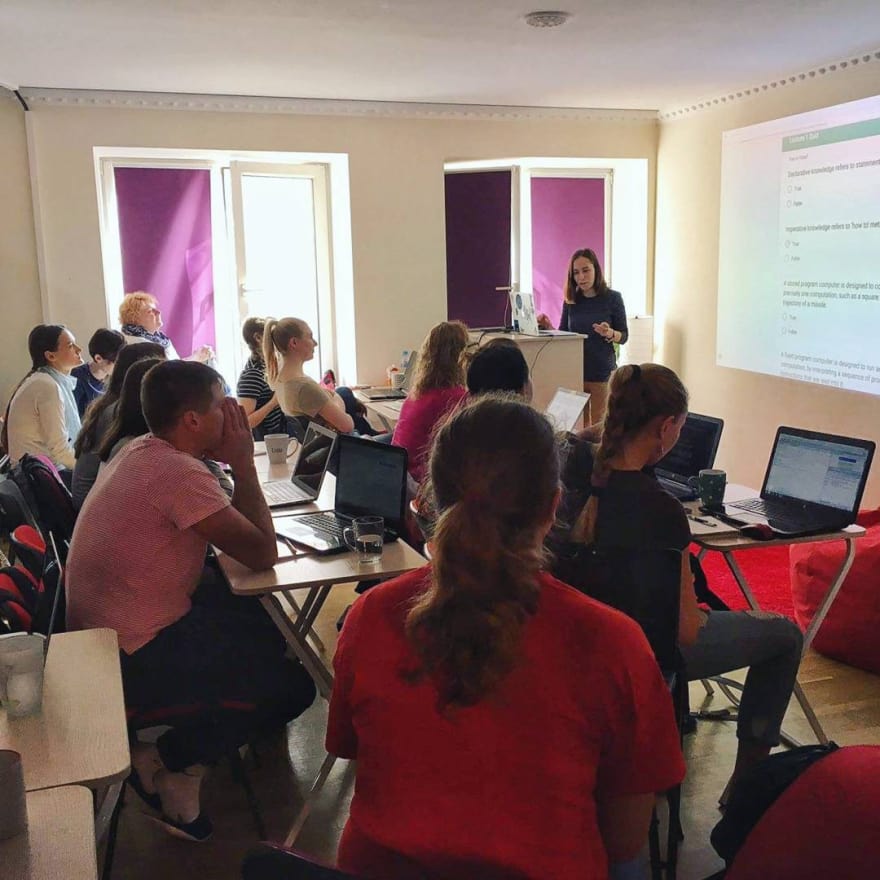 What women do on Sundays at 10am? Study Computer Science, what else would you think?

28 people made it to the finish line. I can say that 12 of those understood the course well, but we anyway didn't have a goal to teach everyone how to become a programmer: someone wanted to try it out and see whether it works, someone needed basic programming skills in their current positions, someone indeed has changed their career and got a new job in IT. 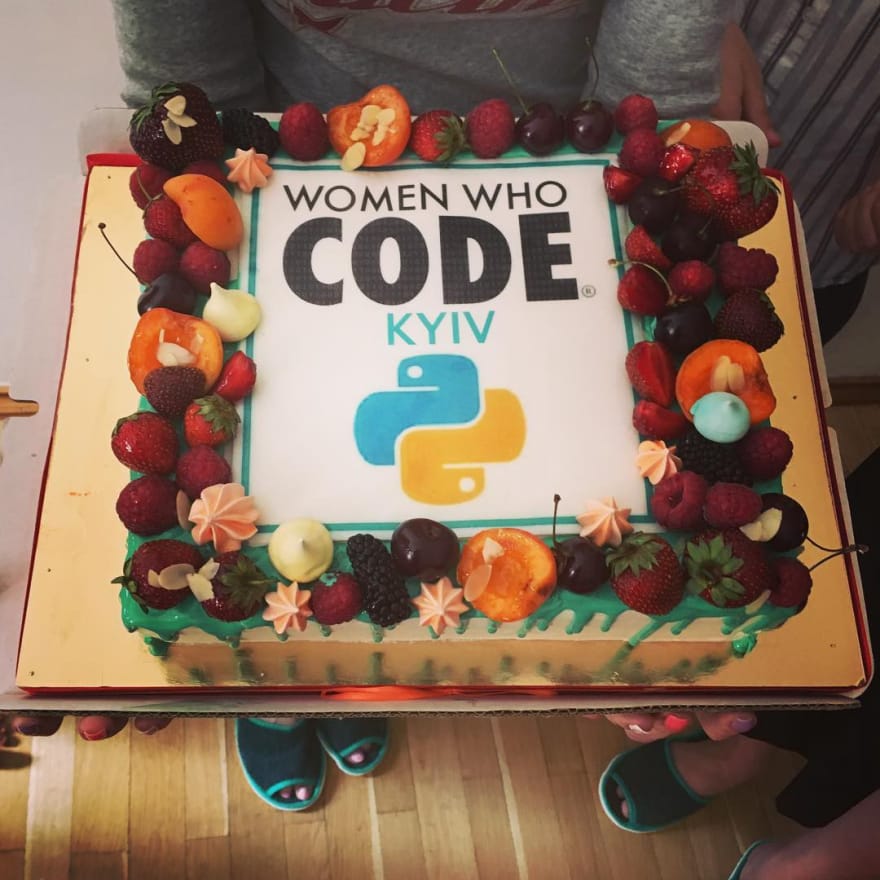 One of the most important outcomes for us, mentors, was that all of us became better coaches. A good leader must be a coach, so that worked well for our existing IT careers.

I wouldn't say that finding sponsors was an easy task in Ukraine: voluntary involvement hasn’t become a trend yet, so unless someone from the top management deeply and sincerely cares — no one wants to blindly throw money into advertising their diversity efforts. We had to explain again and again, why companies would benefit from hosting us, but eventually we won, and now we don't have this problem anymore: a lot of businesses are keen to host our community and are practically competing who is going to host us next. Why? Because our team was diverse, and we had journalists among us for good publicity, SMM professionals to help with social media, photographers to document every single event, and amazing engineers among speakers and attendees, who justified all the battles as perspective candidates for our sponsors.

How all of that helped me to become a better engineer?

We held many meetups, workshops and networking parties, we shared the knowledge online. I am very happy that none of us have become a silo: the community can easily continue to function without the fear of the bus factor. My fellow colleagues by community, my friends, continue to make robust technical events and attract more and more people to the thought of women being true technical professionals.

Helping to build Women Who Code Kyiv was one of the best time investments for my professional and personal development. I improved on all sides and made great friends, who I dearly miss.

P.S. You can follow more stories of our community by hashtag #wwcodekyiv.

Once suspended, advance_lunge will not be able to comment or publish posts until their suspension is removed.

Once unsuspended, advance_lunge will be able to comment and publish posts again.

Once unpublished, all posts by advance_lunge will become hidden and only accessible to themselves.

If advance_lunge is not suspended, they can still re-publish their posts from their dashboard.