CSS Variables are great but do you know everything about them?

In this post, I will highlight a few quirks around CSS variables that no one talks about. After that, you won't look at them the same way anymore.

1) Be careful with !important

Using !important with CSS variables is a bit tricky so let's start with a basic example:

What will be the color of p? you think it's red because we will have the following:

But it's not! the color of p will be blue because we will have the following:

!important in this case isn't part of the value of color but is used to increase the specificity of --color. From the specification:

Note: Custom properties can contain a trailing !important, but this is automatically removed from the property’s value by the CSS parser, and makes the custom property "important" in the CSS cascade. In other words, the prohibition on top-level "!" characters does not prevent !important from being used, as the !important is removed before syntax checking happens.

Here is another example to better understand:

The above will give us a red color:

Following the same logic, we resolve the cascade for --color and for color. --color:red!important is the winner and the same for color:blue so in the end we have blue because we no more care about color:var(--color).

An important rule is to always consider CSS variables (custom properties) as ordinary properties and not only variables that store values.

Custom properties are ordinary properties, so they can be declared on any element, are resolved with the normal inheritance and cascade rules, can be made conditional with @media and other conditional rules, can be used in HTML’s style attribute, can be read or set using the CSSOM, etc. ref

This is a common limitation you will stumble upon one day.

What you cannot do ❌

What you should do ✔️

This limitation is related to how url() is parsed. A bit tricky to explain but as we can see the fix is pretty easy. Always add the url() part within the CSS variable.

If you want more accurate detail, I advise reading this Stack Overflow answer

3) They can make an invalid value valid!

This one is my favorite quirk and it's the one that will give you a lot of headaches.

Let's start with a basic example:

Our .box will have a gradient coloration ... wait, no it has a red background. Ah! I made a typo in linear-*. I can easily notice my mistake because the browser crossed the declaration and used the previous one.

What the hell is happening here ??!!

When using a variable within a property the browser will only evaluate the value of such property at "computed-value time" because we need to first know the content of the variable. In such cases, the browser will consider the value as valid when doing the cascade and only later it will become invalid.

In our case, the browser is considering the last declaration after resolving the cascade. Then when doing the evaluation, it seems to be invalid so it will be ignored. We won't get back to the previous declaration since we already resolved the cascade and we end with no background so a transparent one.

You may think such behavior is illogical but it's indeed logical because a value can be valid or invalid based on the CSS variable so the browser cannot know from the beginning.

If a property contains one or more var() functions, and those functions are syntactically valid, the entire property’s grammar must be assumed to be valid at parse time. It is only syntax-checked at computed-value time, after var() functions have been substituted. ref

To use easy words: a CSS variable will make the status of a property in a standby mode until we do the evaluation. Only after the evaluation, we can say if it's valid or invalid. If it's invalid then it's too late, we cannot get back to using another one.

4) They can be used unitless

Almost all the tutorials/courses will show you such example:

But you can also do the following:

Having the unit in the variable isn't mandatory and in some cases, it's even better to use a unitless value because adding a unit is fairly easy and we may need to use the same value with a different unit.

Here is one example among many (taken from this answer )

Never forget this important feature. It will save you one day.

5) They can be animated

Initially, CSS variables are defined to be non-animatable properties as per the specification:

But things have changed and thanks to the new @property we can do animation/transition with CSS variables.

The support is still low (especially on Firefox) but it's time to get to know this.

Find below some use cases where I am relying on such feature: 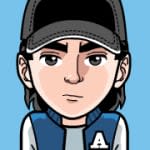 We can finally animate CSS gradient

I will be writing more articles to show the magic we can do with this. Stay tuned!

6) They cannot store the inherit value

Intuitively, we may think that .item will inherit the same border of its parent element because --b contains inherit but it won't (you can try and see).

As I explained in (1), the common mistake is to think that CSS variables will simply store a value that we can use later but not. CSS variables (custom properties) are ordinary properties so inherit applies to them and is not stored inside them.

As you can see, the logic of inheritance applies to them the same way as with common properties.

Let's consider this simplified example in order to illustrate the issue:


The same logic applies to other keywords like unset and revert: How to set CSS variable to the value unset, “--unset-it: unset”?

7) They can be empty

Yes you can do the following:

The above is valid as per the specification:

Note: While <declaration-value> must represent at least one token, that one token may be whitespace. This implies that --foo: ; is valid, and the corresponding var(--foo) call would have a single space as its substitution value, but --foo:; is invalid.

Pay attention to the last sentence because we need to have at least one space. The below is invalid:

This quirk is mainly used with the fallback feature to do some magic.

A basic example to understand the trick:

The empty value allows us to remove the var() declaration from a property! This can be useful when using var() within a complex value.

In case var() is used alone, the same logic applies but we will end uo having an empty value that is invalid for most of the properties.

If we took our first example we will have background: ; which will lead to an invalid value at "computed-value time" (remember the (3)) so a transparent background.

8) CSS variables are not C++ variables

Unfortunately, many developers tend to compare CSS variables to variables of other languages and end up having a lot of issues in their logic. For this specific reason, I don't want to call them variables but Custom properties because they are properties.

What everyone wants to do

All the above will never work. The first two are simply invalid because we have a cyclic dependencies since a variable is referring to itself (first example) or a group of variables (the second example) and is creating a cycle .

In The last example, both padding and margin will have 20px because the cascade will give priority to the last declaration --s: 20px that will get applied to both margin and padding.

This said you should stop thinking C++, JavaScript, Java, etc when working with CSS variables because they are custom properties having their logic.

9) They only work from parent to child.

Remember this gold rule: CSS variables always travel from a parent element (or an ancestor) to child elements. They never travel from child to parent or between sibling elements.

This will lead us to the following mistake:

The root element is the uppermost element in the DOM so its an ancestor of our box element and our gold rule says that we can only do parent --> child so --c1 cannot go in the opposite direction to reach the root element, change --grad and then we get back in the other direction to re-send the changed value of --grad.

In such an example, the .box will inherit the value of --grad defined with the values of --c1 and --c2 inside :root. Changing --c1 will simply change the value of --c1 inside .box, nothing more.

Find below a more detailed answer I wrote around this subject:

I'm attempting to scale size via a var custom property in a way that the classes would compose without being coupled. The desired effect is that the 3 lists would be at 3 different scales but as demonstrated on CodePen all 3 lists are the same scale. I'm looking for…

Even the Stack Overflow team stumbled upon this quirk!

10) They can have strange syntaxes

A last and funny quirk.

Did you know that you can do the following?

Amazing, right? Yes, a CSS variable can be defined using only the two dashes. Related: Is "--" a valid CSS3 identifier?

You think the above is crazy, take a look at the following:

Yes, emojis! you can define your variables using emojis and it works.

Why not only dashes:

Try the above and you will get a gradient coloration!

To achieve such magic I am relying on a hidden character that makes both of the variables different but visually we see them the same. If you try the code on jsfiddle.net You will see the following:

Of course, you should never use such a thing in a real project unless you want to make your boss and coworkers crazy 😜

I know it's a lot of information at once but you don't have to remember everything. I tried to group the most unknown and non-intuitive behaviors around CSS variables. If one day something is not working as expected, get back here. You will probably find your answer in the above.

I will end with some Stack Overflow questions I have answered that can be useful:

How can I get a negative value of CSS variables in a calc() expression?

How to create color shades using CSS variables similar to darken() of SASS?

How to Use calc() to switch between color values?

Can a recursive variable be expressed in css?

Are CSS Variable changes possible upon a radio button's checked selector being triggered?

You want to support me?

Fastest ever Laravel deployments via GitHub? You decide.

Once suspended, afif will not be able to comment or publish posts until their suspension is removed.

Once unsuspended, afif will be able to comment and publish posts again.

Once unpublished, all posts by afif will become hidden and only accessible to themselves.

If afif is not suspended, they can still re-publish their posts from their dashboard.