I managed to write this post long time ago, but just now I found some time to write it. I want to cover the thing that every active developer faces everyday probably multiple times from 1 to 10, 20, 30 times a day. So I will talk about Git commit messages.

There are probably many articles covering this topic, anyway I don’t want to force my vision how this should be handled, but instead share some practices I acquired from seeing problem in this area, looking for some solutions and applying them in practice.

Main source of knowledge was article of one company practicing writing commit messages as in AngularJS library. Here is their Git commit message conventions. I will add some more points to it as well as summarizing their message. 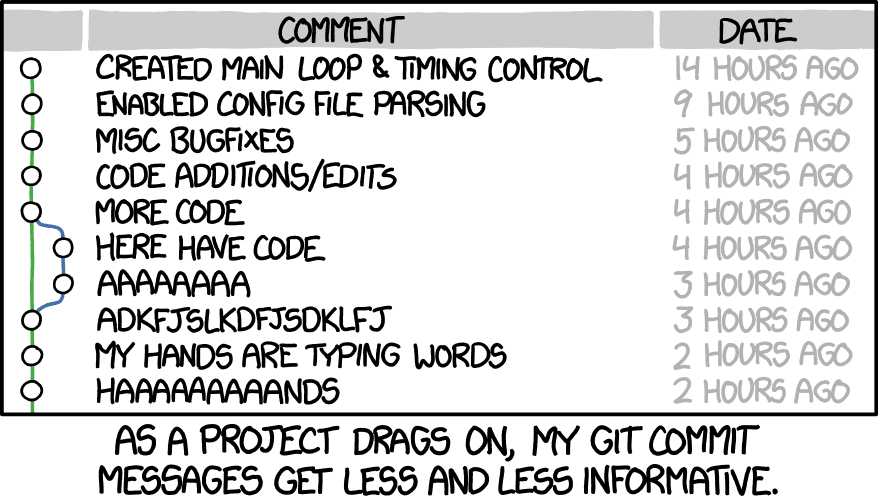 If you search for worst commit messages you can find many examples. I hope you don’t, but just take a look here. These changes don’t make sense what has been done. 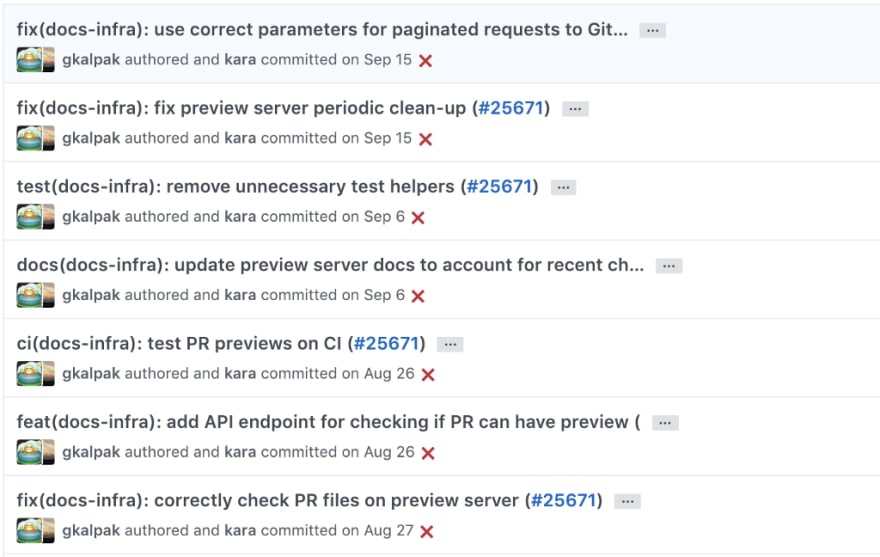 But there are some better messages, those make sense what has been done. However, sometimes there is no context in them — where the change was applied. Of course you can take a look at what has changed, but isn’t it faster just to read one line, rather than inspecting bunch of changed lines?

So, there is a definitely a problem. I will share some my suggestions how it should be handled, and then some resources where from I adopted some practices and modified some.

Use editor, not CLI

This one is probably obvious at the same time a little bit time consuming, but it is really easier to write in some editor, rather than writing everything in one line in CLI after git commit -m "...".

Set it to your favorite editor, but keep in mind that some visually rich editors(like VSCode) might have useful plugins those will hint on some best practices.

To change default editor configuration for your git, write this command:

This will set VSCode as a default editor for commit messages.

Note: you should have VSCode configured to run from CLI.

As a bonus, in VSCode you will also see staged files as a comment in COMMIT_MSG, those will be ignored in original commit. Additionally there is a built-in plugin, that will show when your commit message length is getting too long.

Probably you have already seen some structures for commit messages. I propose you to take a look at AngularJS Git Commit Message Conventions. Here are key takeaways about subject line:

At first it might be harder to maintain this style, but you will get used to. If you are having troubles remembering all of these you can use library that does it for you. Take a look at commitizen.

Sometimes, you might want more type of changes. In this case feel free to add up more, just be sure to coordinate it with the team and document it somewhere.

In some cases you probably want to leave more clues in your commit message. For this purpose use message body. It typically goes after subject line and is divided from it by one empty line. It should also follow the rule of using imperative tense in verbs.

Footer is mostly ignored, but in some cases it can be useful to add up some meta information. You can use it to mention breaking changes_and list the issues it closes in your issue tracker. For examples: _Closes #132, #123.

Here are examples from AngularJS project:

These are mostly recommendations — not a strict policy. You would probably want to adjust these practices to your own needs. Finally, it is your project, your repository, your code — setup your own guidelines and stick to them. If this article was helpful I reached my goal. Thanks for reading!

Working on a branch that depends on another branch

Aibol Kussain
Hi, there! I am a former Android Developer who fell in love with JavaScript and learns things related to it as ReactJS, NodeJS and many other libraries. I'd love to contribute to this community.
What was your win this week?
#discuss #weeklyretro
Learn these awesome Javascript concepts.
#javascript #webdev #tutorial #career
Multiply a string? 🤔
#computerscience #discuss