This blog post is a step-by-step guide to install and use Python for web development, programming, data science or machine learning on a Windows machine using the Windows Subsystem for Linux and VS Code Editor. This post is written exclusively for the beginners in tech.

I have planned to write several blog posts on Python. All of them will be focused on the beginners to get them started with Python for Data Science. Please follow the updates here : Learn Python Step by Step - A Blog Series by Me 🚀

I am a newbie in tech. This blog post is based on my personal experience. Feedback Welcome. Would really appreciate your time 🙏

Techies have different set-ups on a Windows machine to use Python for web development, machine learning or data science. For the newbies in tech, I recommend any one of the following two development environment set-ups (also recommended by Microsoft) to start their coding journey:

Microsoft has been working really hard to develop various new-age tools for the developers and techies to bring web development, data science and machine learning to the masses. It created Azure cloud computing service and TypeScript open-source programming language. It acquired GitHub and R software. It developed source-code editor VS Code, Windows Subsystem for Linux (a tool to use Linux on windows without installing any virtual machine software), and has been continuously working to improve Microsoft Terminal. It clearly shows Microsoft tools have been slowly gaining the popularity among data scientists, engineers, and developers.

This combination of Windows Subsystem for Linux (WSL), VS Code editor and Python extension is truly a solid set up to work with Python for anything, be it data science, machine learning, artificial intelligence or web development.

We will install and use the three tools by Microsoft to learn Python on Windows 10. Let us start installing one by one.

I have already written a how-to-guide to set up WIndows Subsystem for Linux (WSL). Follow this guide to set up WSL - a powerful tool built by the Microsoft. In this guide, you will learn how to install and use Linux inside a Windows machine without installing any Virtual Machine software. You don't have to leave your favorite Windows UI anymore. Additionally, use this guide (optional) to create files and folders inside WSL.

⚙️ Set up VS Code to work with WSL

For the beginners, I have written a comprehensive guide on how to work with VS Code editor inside the WSL. Follow this step-by-step guide. In this guide, you will learn how to set up VS Code as our text editor / integrated development environment (IDE) to work with WSL. The cool thing is you can run all the Linux commands, such as mkdir to create a project directory and touch to create a file, using VS Code integrated terminal.

So, you don't have to leave you favorite Code Editor too.

🛠️ Install Python and its modules inside WSL

If you have followed my WSL guide, you would have seen Ubuntu terminal by now. Ubuntu 18.04 LTS comes with Python3 version installed. But it leaves out some of the modules and packages that Python applications often uses that don’t come as part of the standard library. We will install a couple of them.

Before installing them, one should make sure Python3 is already installed. To confirm, run python --version in the VS Code integrated terminal. You will see Python version (version 3.6.9 in my case). Make sure you have WSL installed on your Windows machine, and you have set up VS code server using the guides in the previous section. To update the Python version, first you should update your Ubuntu version using this command: sudo apt update && sudo apt upgrade. The terminal will ask you for the password you set up during installing the WSL tool. Type your password (the password will not be visible) and press Enter button using your keyboard. During this process, if the terminal asks you "Do You want to continue? [Y/n]", just press Y using your keyboard, and hit Enter button. It is basically seeking your permission to download something from the internet. Make sure you read first.

Next, we will install pip - the standard package manager for Python. Run this command in the same VS Code integrated terminal:sudo apt install python3-pip. Pip is a package installer for Python that helps us install packages from the Python Package Index. You can install Pandas - a Python package used for data analysis, time series, and statistics by running this command: pip install pandas. Note that depending on your environment, you might have to use pip3 instead of pip in the above command.

Now, we will install venv - a module that provides support to create and manage lightweight virtual environments. Run this command in the terminal:sudo apt install python3-venv.

Learn more about pip and venv.

⬇️ Install Python Extension to work with VS Code

To install Python extension, press CNTRL+SHIFT+X button simultaneously using your keyboard. This will bring up the Extensions view in the Left/Right side of the Code Editor. In the top Search box, enter "Python". Look for "Python (ms-Python.Python)" by Microsoft extension. Click on Install or Install in WSL:Ubutnu-18.04 button.

Once you have installed the extension, VS Code will ask you to reload the
code editor. Click on Reload Required button, if asked. This will reload VS Code. The final view may look like this: 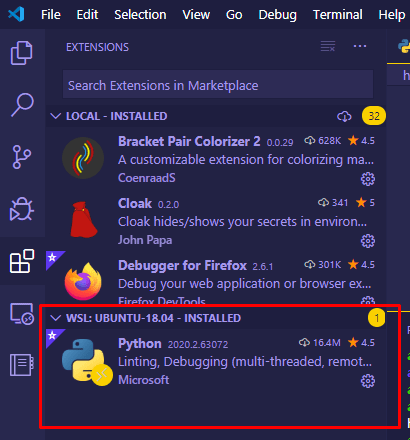 Python is an interpreted language, which means we should tell our text editor, here VS Code, to select an interpreter in order to run Python code using VS Code editor. Python supports different types of interpreters (Python2, Anaconda, etc). We will use Python 3.6.9 though you can install different versions of Python and use them as interpreters for different projects. To choose a Python 3 interpreter, bring up the Command Palette view of the VS Code. Press Ctrl+Shift+P button simultaneously using your keyboard, type Python: Select Interpreter, and select it from the drop-down.

Once you click the Python interpreter, the drop-down will show you Python
versions installed inside WSL. I can see only one as I have installed one only version of Python. Click on "Python 3.6.9 64-bit".

Microsoft will download the Python language server. Once the download finished,
you would see the Python version you selected as an interpreter in the Bottom Status bar.

If you don't see the version you like to choose in the dropdown, follow this guide to configure Python environments.

Newbies should try out some more simple codes in the Python interpreter. Stop the terminal by pressing Ctrl+Z button keyboard buttons in the terminal. You will see the text "Stopped ... Python3". Toclear/delete the commands you entered in the terminal, press  Ctrl+L button. This completes our Python set up process inside the Remote - WSL.

In the VS Code integrated terminal, enter command ls to see all the current project directories. Create a new project directory "ajeet_python" by entering this command: mkdir hello_python . Create a Python file inside this folder. Enter touch ajeet_python/learn.py . The .py means we are creating a Python file. Now go to the newly created folder. Enter cd ajeet_python . To see the newly created Python file, enter ls . You can also see both the file and folder in the left side bar of the VS Code UI (called VS Code File Explorer). 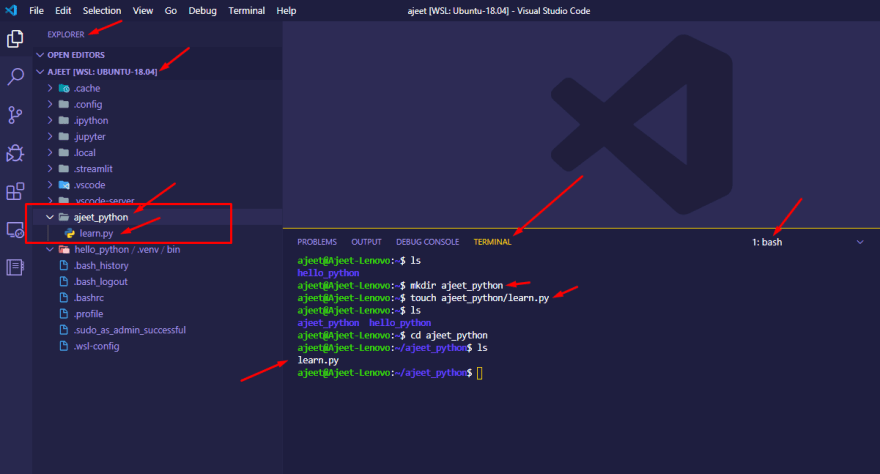 Inside the newly create Python file learn.py, let us write a code and save it. Open the file by double clicking on it. Copy this statement print("Hello to everyone")paste it in the file, and save by pressing Ctrl+Z  button keyboard buttons. Now, we have to run the Python "Hello to everyone" program. In the integrated terminal, enter python3 learn.py . This will run your program you just created, and the Python interpreter will print "Hello to everyone" in the terminal window. 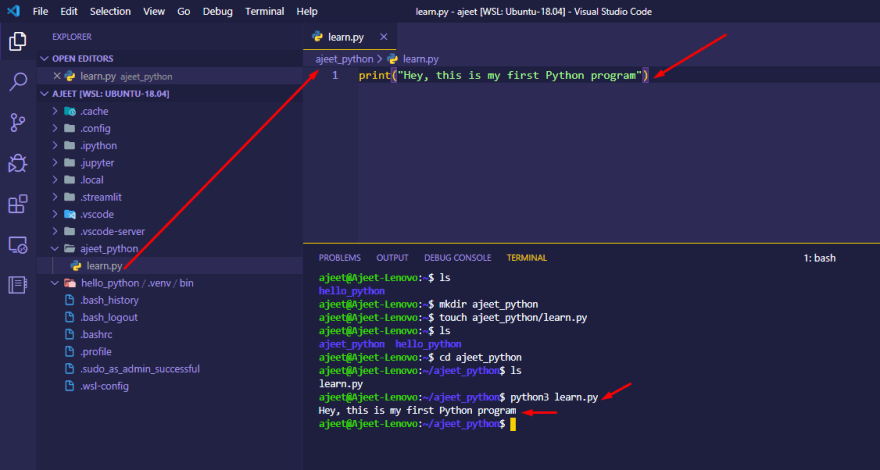 Yay 🎉🎉 Congrats! We have set up our Python development environment on Windows machine.

💡 What's Next - Setup Jupyter Notebook with VS Code

I am going to write about setting up the Jupyter notebook with VS Code editor to learn data science and machine learning on Windows 10. Blog post coming tomorrow at my blogging website. Meanwhile, here is the Table of Contents. 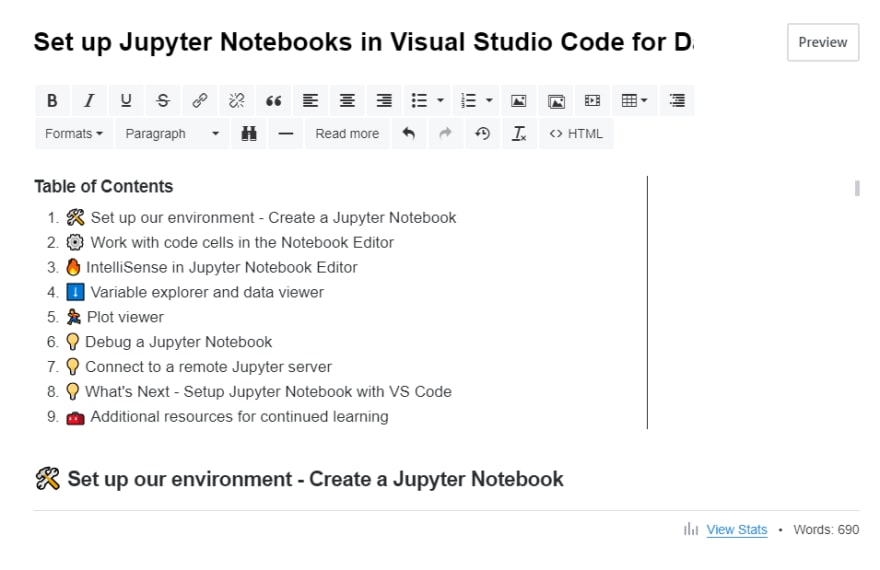 I recommend the following resources to help you in continuing to learn Python on Windows using WSL and VS Code. Don't miss! 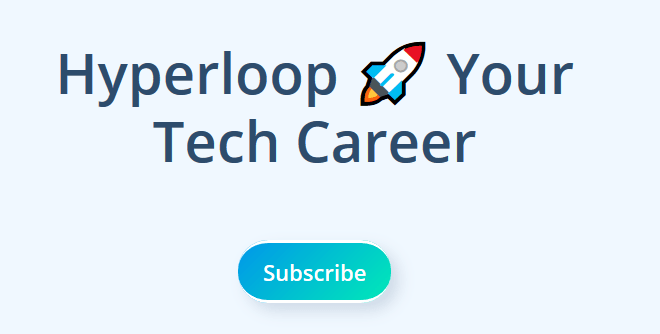 5 Ways To Optimize Your GitHub For Potential Employers

Ajeet Yadav
Set up Jupyter Notebook in VS Code for Data Science
#beginners #vscode #jupyter #python
The Ultimate Guide 🚀 To Use VS Code With Windows Subsystem for Linux (WSL)👩‍💻👨‍💻
#vscode #webdev #beginners #codenewbie
So, you have installed Windows Subsystem for Linux? Let's learn how to move files inside of Linux Root System
#wsl #codenewbie #webdev #beginners

Once suspended, ajeet will not be able to comment or publish posts until their suspension is removed.

Once unsuspended, ajeet will be able to comment and publish posts again.

Once unpublished, all posts by ajeet will become hidden and only accessible to themselves.

If ajeet is not suspended, they can still re-publish their posts from their dashboard.

Once unpublished, this post will become invisible to the public and only accessible to Ajeet Yadav.

Thanks for keeping DEV Community 👩‍💻👨‍💻 safe. Here is what you can do to flag ajeet:

Unflagging ajeet will restore default visibility to their posts.