Text transitions are usually preferred when you need to notify a user of any text
being changed on screen and it just not make the experience better, but, also
important when text content on website changes based on the user actions on the screen.

For example, if you're on an e-commerce website and read the price of
an item, but, you changed the quantity of the item and suddenly your
shipping charges are increased, making it important to highlight those
changes to the user.

I believe this is one of the use-cases where text transitions are required,
also, React and Vue frameworks support Hot Module Replacement, updating only the particular modules. See the example below to understand how simple text transition can
have an impact on user experience.

You can observe the difference when the UI has no transition, we might have missed the change in the heading at first look.

Before we start with any framework, the following things are common among various frameworks for transitions in entering and leaving transition states:

There are three stages in each state of transitioning, initial stage, transitioning stage and transition done stage,
giving us total 3+3 stages for entering and leaving altogether. The naming convention may vary with a different framework,
see in below image for better understanding.

To trigger the transition, there are multiple ways, a few of them are as followed:

Let's see how it can be implemented and understand the complexity with different frameworks.

Vue has in-built <Transition> wrapper component which allows adding entering and leaving transitions for a component
or a parent node wrapping multiple nodes. Refer below image for different classes available. 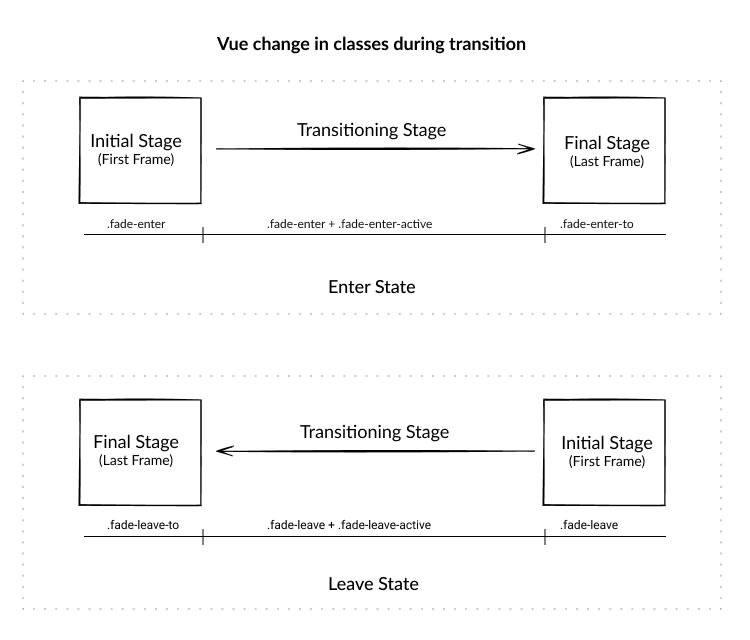 We will use Dynamic Component loading, mentioned above as one of the Transition triggers, for text change transition
using key attribute to inform Vue of any change in node/content.

Once we implement this, we see transitioning working as below:

You can see that this is NOT what we desire, the problem is that the new text content is coming before the previous
text content is hidden and due to this, both contents are visible for a fraction of second during transitioning.
This is what we call as in-out mode, which is set by default.

How to solve this flickering issue?

To make this transition smooth, we have to make sure that the transition of old text content is completed
before new content transition starts. For that, we specify mode as out-in to prevent flickering.
You can read more about transitions and modes in-depth here.

Unlike Vue, in React, we have to import a separate transition library, react-transition-group
which provides specific Component wrappers like CSSTransition, Transition, SwitchTransition and TransitionGroup.

For text replace transition specifically, we need two components, CSSTransition and SwitchTransition. It also has 3 stages of
the text transition in both entering and leaving transition states just like Vue. Refer to below diagram to understand the classes. 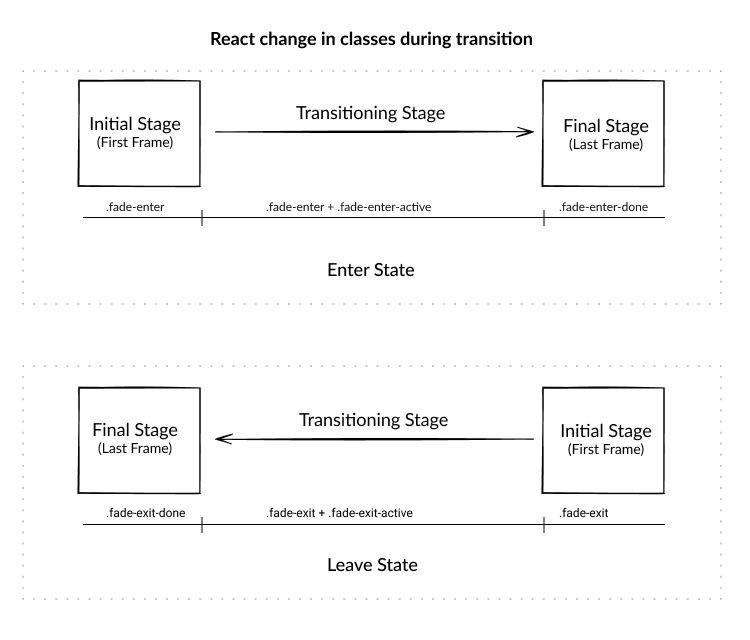 It handles the transition on the content, like the timeout, transition class name, etc., It has support for following props:

We are removing and adding the same fade class with changed text content and using innerHTML which repaints
the content enabling the transition effect (called as forced reflow).

By default, we add a fade out related properties to .text class so
that once the fade class is removed, it can work just like
'fade-leave-active' in Vue or 'fade-exit-active' in React.

There are two methods by which you can add transition:

Hope you got some basic idea about how implementation is different as per framework and in vanilla JS. Do share your queries in comment section below.

TypeScript: The evolution of JavaScript