When we Google best cache eviction policy, we get LRU which is an abbreviation of Least Recently Used as the top search result. In this blog, I am gonna decode LRU Cache Eviction Policy. Let's start by understanding the core goal for any cache eviction algorithm.

The goal for any cache eviction algorithm or technique is to improve cache performance by ensuring the most commonly accessed resources in the application remain in the cache memory while the other resources get evicted. In this way, commonly accessed resources can be retrieved by the user or application modules almost instantaneously which reduces the no. of expensive repetitive queries and improves the overall performance of the application in turn. The cache eviction algorithm or policy is responsible to remove or evict data from the cache when it's full. LRU is one of the cache eviction policy.

In LRU, as the name suggests the least recently used resource or data gets evicted from the cache when it's full.
For example, if we have a cache with a capacity of 3 items. First, we add an element 7, since the cache's max capacity is not reached, 7 can easily be accommodated inside cache.

Same will happen with the next two elements 2 and 9.

Now when we add next element say 5, as the max capacity of cache, is already reached, we need to evict least recently used element that is 7 and add 5. This is similar to Queue data structure since we are following FIFO.

If we have got 7 in place of 5 the 7 would have come in the front of the queue since it's recently used.

3.1 HashMaps
Hashmap is a data structure which can search and insert data in time complexity O(1). For every entry in the hashmap, we have a key value pair. A key is a unique identifier of the value. Let's decode the working of the hashmaps. 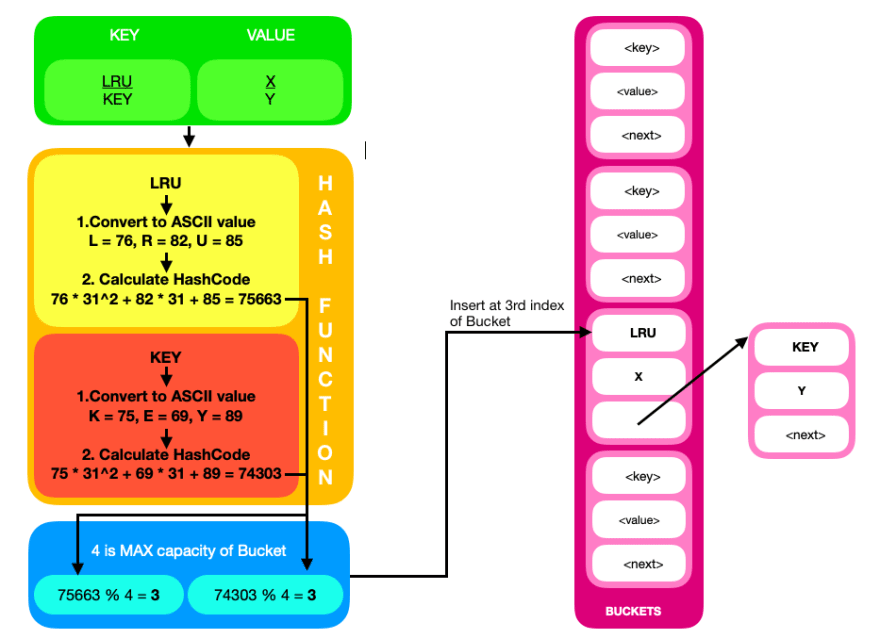 To learn more on Hashmap, Initial Capacity and Load Factor refer this.

3.2 The Exercise
In the above section, we learned about the hashmap and it's working. Now let's implement hashmap without actually using the class HashMap.
We need:

Now, we will write a Linked List class that will contain a method to add node in case of collision.

Finally we will write HashMap class which will have get, put, hashFunction and moduloFunction method.

Note: This is not the perfect implementation since we are not handlining integers as Keys, Integer Overflow in hash-function and many other issues. This is just for the sake of developing an understanding.

Let's tweak the above code implementing hashmap to achieve this. We will implement LRU use HashMaps and Doubly Linked List.

Now let write addToHead method. This is used when a new entry is introduced in the cache. Since its the most recent entry, it will be added to the head of the list of the respective bucket.

Suppose we get an entry which is already present in the list but since its the recent entry, it needs to be moved to the head. To implement this we will define moveToHead node.

When the capacity of the list reaches it's maximum we will evict the tail. This is done using removeTail method.

Define the get method

SPAs: Have Your Cache And Eat It Too

🧠 A New React and the Old Cache

How I Learned to Stop Worrying and Love the Cache - Reading

Once suspended, akarshan96 will not be able to comment or publish posts until their suspension is removed.

Once unsuspended, akarshan96 will be able to comment and publish posts again.

Once unpublished, all posts by akarshan96 will become hidden and only accessible to themselves.

If akarshan96 is not suspended, they can still re-publish their posts from their dashboard.

Once unpublished, this post will become invisible to the public and only accessible to Akarshan Gandotra.

Thanks for keeping DEV Community 👩‍💻👨‍💻 safe. Here is what you can do to flag akarshan96:

Unflagging akarshan96 will restore default visibility to their posts.