This past summer, I woke up bright and early one Saturday morning to head to my very first “no-code” hackathon in NYC. 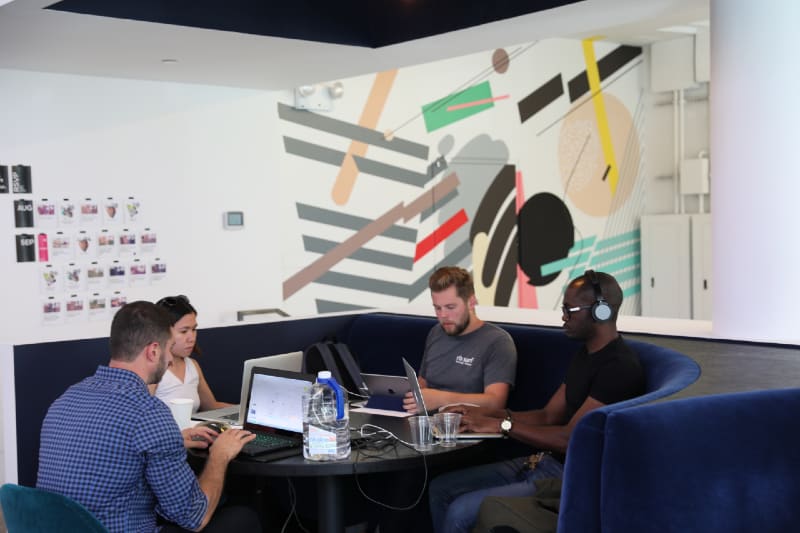 I met with the hackathon organizer months before she decided to put the whole event together to understand the goals of the hackathon and how I could help. I was a mentor during the hackathon, and my role was to help participants prototype their ideas in Coda (Coda and Bubble were partners for the hackathon). People could build their project in whatever platform they chose, but were encouraged to not use any code.

The structure of the hackathon involved the typical steps of creating a product from scratch: brainstorming, customer interviews for validation, gathering data, and prototyping. Having been to numerous hackathons in the past, I can confidently say that a “no-code” hackathon creates the most inclusive and diverse environment for participants. Before I get into the reasons, I want to talk briefly about how hackathons are traditionally implemented.

I’m not technical, so how do I participate in a hackathon?

From weekend-long hackathons to multi-week virtual hackathons, I’ve always been a non-technical participant during most hackathons I’ve attended. You may be asking yourself: how does someone who doesn’t ship product and code actively participate in a hackathon? My activity during the hackathon looks something like this: 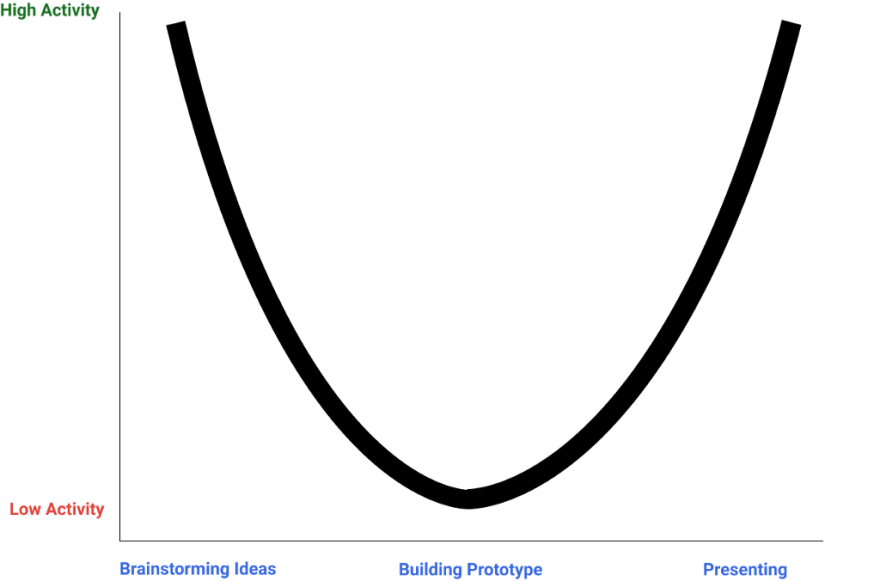 I’m typically really active during the beginning when everyone is in the brainstorming phase and it’s just a green field of ideas and potential opportunities. Then the idea gets handed off to the technical people in the group to go and build the prototype. I might get involved with testing or design, but overall my activity starts to diminish until near the end when we have to demo and pitch the project. That’s what non-technical people are good at, right? Pitching and selling ideas?

Organizing hackathons is unlike many other events because you have to ensure everyone attending is able to learn and contribute. This article from freeCodeCamp lists some great benefits of hackathons like networking, building your portfolio, and learning how to work in teams. This one sentence caught my eye from this article:

Plenty of non-technical people are needed at these events and even people who want to code but only know HTML or CSS can help on a team.

Granted this article is from freeCodeCamp, a community for learning web development, the statement that non-technical people only know HTML or CSS sets the expectations quite high. What if I don’t know HTML or CSS? 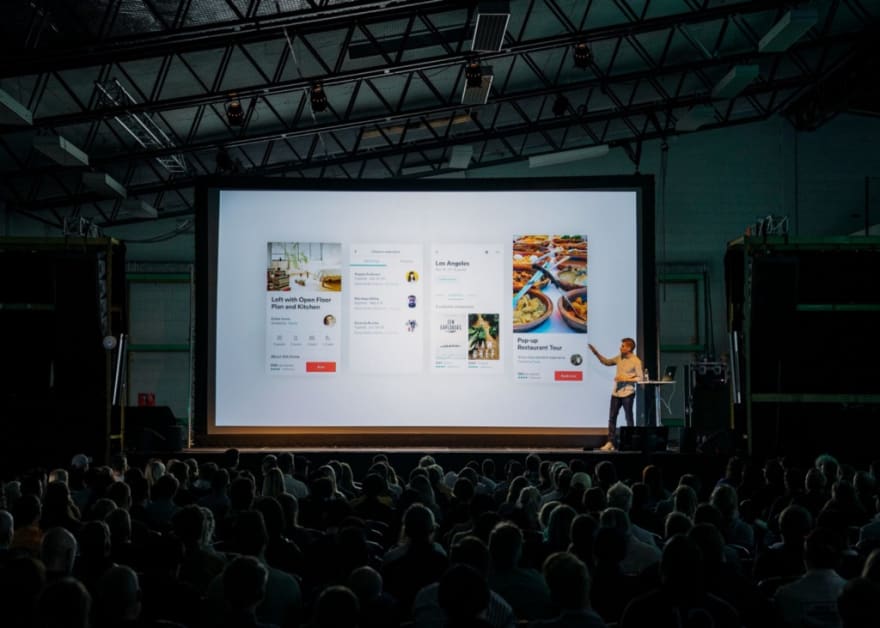 You may think of hackathons as events where coders get together to put together really amazing prototypes that may turn into software down the line. Over the years, communities and companies have found that the real benefits of hackathons extend beyond just shipping code. Sparking creative ideas, conducting user interviews, and doing market research are some other ways people can get involved as this Harvard Business Review states. Sometimes the hackathon may just be one giant brainstorming session with the goal of allowing people to break away from their day-to-day to turn on their innovation muscles.

The no-code hackathon went above and beyond to make the event as inclusive as possible, and it was amazing to see people come from all walks of life and most importantly, from all different skill levels when it comes to building a product from scratch. These are some of the reasons the no-code hackathon organizer decided to put together the hackathon in the first place:

It stemmed primarily from the interactions I was seeing between non-technical people that wanted to build stuff and the technical people they were looking to partner with. There’s a lot of friction in that line of communication from before anything is even built. In general I’ve seen that non-technical people can’t always articulate their vision very well and that’s partly because without building any kind of information architecture or user flow, you can’t have a strong grasp of what will or won’t work. And unfortunately, on the technical side there’s a bit of an elitist feeling which, of course, is never a good foundation for communication. No-code tools help with this. They help you communicate your vision by letting you actually get a feel for how all of the product features need to flow together and for some I feel like they might even be a gateway drug into actual coding. My goal was to exercise a method that would help everyone get on the same page and take the pressure of needing to have a complete coded product off the table. I didn’t want anyone to feel like they didn’t have anything valuable to contribute because that’s just not true. Pretty much everyone that came to the hackathon didn’t know each other going in. Despite that, [it seemed like] everyone was collaborative and respectful of each others’ input._ — _Lola, No-Code Hackathon organizer

Now onto the reasons a no-code hackathon is the best type of hackathon:

If you are not familiar with the “no-code” movement, this article by Ryan Hoover gives you a good introduction to the platforms and mindset of no-coders. I’ve also written extensively about no-code tools, and seeing people prototype their ideas with no-code tools in one room is like seeing Ryan’s article come to life. Hackathon participants can quickly take their ideas from a piece of paper or Google Slide and turn it into a working prototype with any number of no-code platforms. The beauty is that anyone on the hackathon team can prototype which shows how the no-code movement lives up to its credo of democratizing software building to the masses.

A few hackathon participants showed their excitement from being able to build with no-code:

As a non-technical individual and visual learner, no-code platforms like Coda and Bubble are incredibly exciting. After attending the no-code hackathon and learning about these platforms, I started my first project where I get to build everything with my own two thumbs. For me this has been incredibly rewarding. No-code is going to open up a whole new market of builders and founders. — Scott, No-Code Hackathon participant

The HBR article discusses how companies will hold internal hackathons to “reinvigorate and inspire” its employees. In addition to generating new ideas, the participants in the no-code hackathon I mentored also got a taste of using various no-code tools that they could then bring to their day jobs. If you work at a corporation, you may be forced to use the tools that IT has approved for you. Being exposed to no-code tools means that people can think of creative ways to solve problems at their jobs involving data and team collaboration. This quote from a no-code hackathon participant demonstrates the tools he used during the hackathon will crossover into his day job:

I have the confidence in my own tools for my job as an interior architect, instead of relying on the tools that are made available to me from my company. It’s a great feeling to know that I don’t have to rely on a combination of excel sheets, word documents, emails to manage my projects. — Oliver, No-Code Hackathon participant

#3 Validate ideas with an MVP

Like other hackathons, this no-code hackathon gave teams time to interview potential customers of their product. Mentors like myself and individuals from other teams would walk around to each table where you would get interviewed by the team working on the project. This is a great way to take your hypotheses about a product and quickly validate it before going off and building the whole product. The benefit of using no-code tools is that the teams could actually show an MVP of a landing page or mobile app while doing the customer interview. Having something you can demo — no matter how ugly it looks at this stage — is so important for hackathon teams. That super early feedback on your prototype plus the qualitative feedback from your customer interview ensures you’re on the right track. 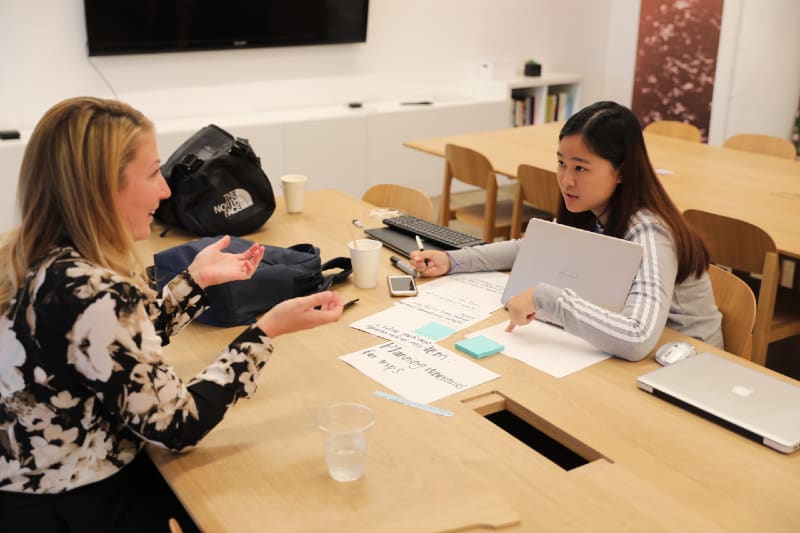 #4 Having a prototype before you build it “for real”

In previous hackathons I’ve attended where we weren’t using no-code tools and there weren’t coders to build a prototype, the final output of the hackathon might just be PowerPoint presentation and some spreadsheets. If we were lucky, maybe we had a decent design in Photoshop. If I were to take that PowerPoint and show that to a development agency to build my app, I would end up spending quite of bit of time explaining what my app is supposed to do. The output of a no-code hackathon project may be a working prototype with buttons, menus, database, and workflow. If you really wanted to get this app built out by an app development agency, you would have a semi-working prototype that shows how the app could work from beginning to end.

The indie hacking mindset might be to skip building the prototype with no-code tools and perhaps try to build out a bare bones MVP with code. I would argue that the learning curve for Swift is much higher than most no-code platforms. I’m still a huge fan of indie hacking projects outside of hackathons since there are other no-code platforms you can use as an indie hacker such as a landing page to capture emails for your new product.

The future of code is no-code

Most articles about no-code platforms and the movement overall do not claim that there won’t be a need for coders in the future. I think the common theme is that no-code tools and coding frameworks can co-exist since there are a large number of makers, indie hackers, and 9-to-5ers who want to build new products, but never had an opportunity until now. Non-technical participates at hackathons have graduated from PowerPoint and spreadsheets as their main weapons of choice at hackathons to these more robust no-code platforms. There are entire conferences dedicated to this movement (I’ll be presenting on my path from spreadsheets to no-code at this conference).

But I just wanted to say that the no-code hackathon gave me more confidence than I, as a non-tech professional, can meaningfully build my own ideas. — Oliver, No-Code Hackathon participant

Everything There Is to Know About Associations in Rails

Learn how to get started with associations in Rails by following these simple examples and descriptions.

What Google's acquisition of AppSheet says about No Code Development?

Is it really better if "bad" coders don't code?

You Got This 2020 Retrospective