Hello everyone once again! Today I’m writing a post about Unity! I started developing using Unity just a few months ago, but despite having some experience in development, this is my first time with videogames.

I believe that explaining each step while having zero experience myself might be interesting and could provide other developers with some insight of the challenges that come with developing games.

I’m a newbie when it comes to developing videogames in general, and more particularly using Unity, so feel free to make any suggestions you might have, and also let me know if you believe there are more standardized ways to solve the problems I’m about to propose.

As a final note before we dive in, I would like to remind you that I’m no artist at all, therefore I won’t be creating any assets for the game from scratch (like 3D models, textures, animations and so on). I’ll be using free asset packs from the unity store :)

Everything being developed in this post is publicly available in this repository.

Every step is going to be also accessible via Tags. For example, you can check the final code of step 0 here.

That door is the one we are going to animate later for opening and closing it.

For the character movement I've set up the new input system so we can move with the standard WASD keys.

Feel free to check out the project and explore everything in there until you feel comfortable to move to the next step.

Note: For showing the cursor while playing the game, press ESC

First things first: If you haven’t done it already, make sure to display the animation window by clicking Window > Animation > Animation. Then switch to that tab, click the door and, in the Animation tab, click to create a new animation. Call it "Door".

Once we have the animation file, we are going to create the animation itself. Switch to the Animation tab and click the SimpleDoor:Global_ControlSimpleDoor_MainDoor_LOD1 component inside Aparment_Door prefab.

That will create a key frame in the frame 0 with the rotation set to (0,0,0). Then move to the frame 120 and change the rotation around the Y axis to 97º. It's important to change it in the rotation section instead of rotating directly in the scene view.

Now you should have 2 key frames, so you can stop recording and save the animation.

Show the animator tab by clicking Window > Animation > Animator and click the Aparment_Door prefab so you can manipulate the animation state machine of the door.

We are going to create a new state and call it Idle. Then make the layer default one and uncheck the "Write Defaults" checkbox.

Finally, the last steps we need to follow are to change the door state name to DoorOpen, and create a new Float parameter which we will call direction. That param will be used to control whether the animation has to be played regularly or backwards. To make that happen we must go to the DoorOpen state and under Speed parameter there will be a greyed Multiplier parameter. That is what is going to allow us to reverse the animation, so check the "parameter" checkbox and the drop down should show the "direction" parameter we created earlier.

To check that everything is working fine we have to play the game and check that the Idle state is played on loop.

Now it's time to code!

We are going to use inheritance for that. If you don't know what inheritance is, is a technique that allows us to reuse and extend functionality by using parent-child classes. For a more extended a technical definition, head to someone who knows more than me. 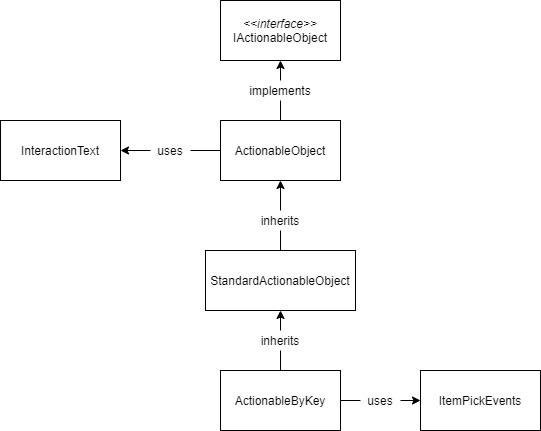 We will see each part in detail when we reach them. We are going to define an interface to make our life easier when it comes to detect an actionable object and also a specific class for each type of actionable object, extending the generic classes with specific functionality. And for the key objects specifically, we will take advantage of the C# events.

All of the files created in this section are going to be placed inside the Generics folder.

Our interface is an easy one:

We have to define an Interact method which will be called when the actionable object is interacted and will trigger whatever behavior we want.

GetInteractionText returns the text to show when looking at the object (if any). For example: "Press A to open".

IsInteracterActive is for telling us if the object is interactive or not (for a key object, it will return false until the key is picked up).

Now that our interface is ready to be used to detect actionable objects, let's move to our other two generic components. First the InteractionText:

The first thing we are going to do in this code is to forcefully bound the script to a GameObject with a Text component.

The class will have a referente to the Text component and two attributes for holding the initial text and the interaction text.

We are going to use the Start method to store the reference to the text component and setting the m_initialText to the text inside the component.

The last thing is a function for changing the interaction text.

NOTE: We could enhance the performance by having a flag indicating when the interaction text has changed and only updating it when changed, instead of in every Update call.

This class must be abstract because we need to force a specific implementation for each type of actionable object.

The Start method does nothing else than calling an abstract InnerStart. This is done in order to avoid a reimplementation of the generic Start without calling the super. This is useful when we need to force some behaviour in the parent class that cannot be overriden (as in the Interact function). Is some sort of template method.

GetInteractionText just returns the interaction text or the reverse one depending on the m_interacted flag.

Interact is similar to the Start function. It's called when the object is interacted and just calls the InnerInteract (which will hold the specific interaction code) and flips the m_interacted flag.

And that's all for this step! We have just implemented our generic actionable objects! Let's move to the next step!

Remember, you have the code developed in this step here

Here we are going to implement the specific class for a standard actionable object. This means that it's not actionable by key, that triggers an animation and that is "reversible" (you can, for example, open and close a door). I consider this the standard since it was the first type of actionable object I implemented and will be the one which will be used more extensively in our game.

You may remember that we used some hardcoded strings in the editor when setting up the animations (a parameter called "direction"). Instead of using literals we are going to extract that to constants, to avoid having hardcoded strings across all our codebase.

Create a folder called "Constants" inside our "Scripts" folder and, inside it, create a file called "Animation":

We are isolating those constants in the Animation namespace to avoid collisions with the script name and the Unity Animation component. We are defining a constant called ANIMATION_DIRECTION with the direction parameter name.

First we are going to require the Animator component to trigger the animation.

Then, define an attribute to store the name of the state in the animator to play when the object is interacted.

The InnerStart will just store a reference to the Animator.

The InnerInteract will call to UpdateAnimation and, that one, will set the "direction" parameter to 1 or -1 depending on the m_interacted flag. Remember that the direction controls the speed of the animation. If the object has not been interacted we are going to set the speed value to 1 and the animation will be played forward. If it has been interacted, the direction will be -1, so it will be played backwards. Right after that, we will play the state stored in the animationState attribute.

And that's all! Easy, right? That's why we invested some time in the parent class, so the children are easy to implement.

Let me stop here for now and finish the implementation in a following post. In the next one we will implement the specific classes for each type of actionable object and set everything up in the editor to use it.

Please feel free to make any suggestions and propose improvements to the code in this post, as well as any doubt you might have! Stay tuned for the next post in which we will finish implementing our key objects!

ASP.NET Core - Why asynchronous is useful

Primitive Geometry in wgpu and Rust

Once suspended, alesanchez will not be able to comment or publish posts until their suspension is removed.

Once unsuspended, alesanchez will be able to comment and publish posts again.

Once unpublished, all posts by alesanchez will become hidden and only accessible to themselves.

If alesanchez is not suspended, they can still re-publish their posts from their dashboard.

Once unpublished, this post will become invisible to the public and only accessible to Ale Sánchez.

Thanks for keeping DEV Community 👩‍💻👨‍💻 safe. Here is what you can do to flag alesanchez:

Unflagging alesanchez will restore default visibility to their posts.