When I started coding in Elixir (around 2016), I was working for a financial company. Our product automatically invested money in the Forex market by copying traders' actions (market orders) in real time. We had the following: 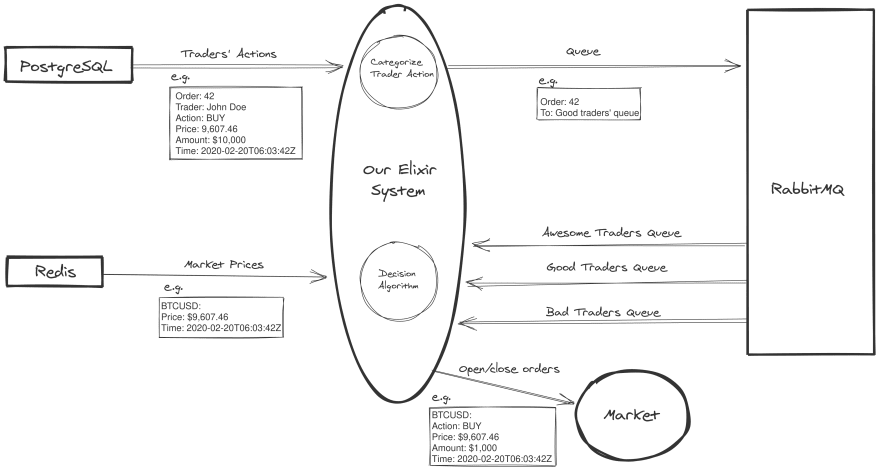 In words, our system:

We needed to be able to communicate with three systems (PostgreSQL, RabbitMQ and Redis). However, in general, we only needed three actions:

If we could generalize those three actions into an API, we could then implement three individual adapters for every system to handle the annoying stuff like disconnections, failures, resource management, protocols, etc.

Handling subscriptions should be easy and, in an ideal world, we would only need to know where to connect and start receiving messages right away.

We shouldn't need to worry about secondary (yet relevant) things like disconnections, failures and managing resources.

Yggdrasil is an immense mythical tree that connects the nine worlds in Norse cosmology.

Yggdrasil was our pub-sub generalization. Using the strong foundations of Phoenix pub-sub library, we built an agnostic publisher/subscriber application that has:

One API to rule them all

flush() cleans the IEx process mailbox. In general, receiving Yggdrasil messages should be the same as receiving messages when the sender uses send/2.

Yggdrasil provides a behaviour for writing subscribers easily. Following the previous example, the subscriber could be written as follows:

This subscriber will print the message as it receives it:

An interesting side-effect is that now we can send messages to any process as long as they are subscribed to the right channel without needing to know the process PID or name.

Yggdrasil hides the complexity of a pub/sub and let's you focus in what really matters: messages.

Once suspended, alexdesousa will not be able to comment or publish posts until their suspension is removed.

Once unsuspended, alexdesousa will be able to comment and publish posts again.

Once unpublished, all posts by alexdesousa will become hidden and only accessible to themselves.

If alexdesousa is not suspended, they can still re-publish their posts from their dashboard.